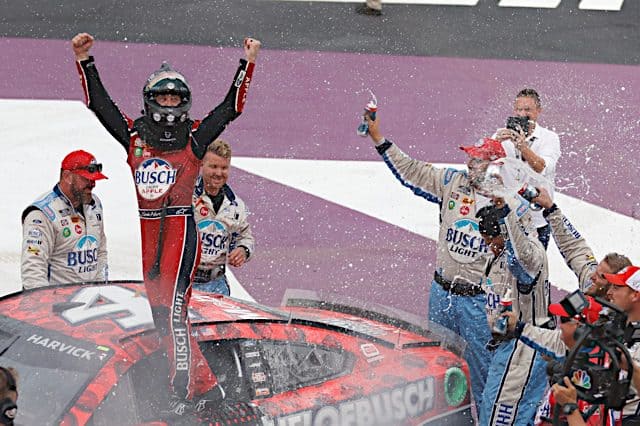 His reward? A 13th consecutive postseason bid, the longest active streak in the sport. Harvick will now seek a second championship after winning one in the first year of the sport’s elimination-style playoff format in 2014.

Frontstretch’s Adam Cheek is joined by Jared Haas to break down whether Harvick’s triumph vaults him into title contention after a winless 2021 and so-far-lackluster 2022. The duo also discusses the Next Gen performed in the Irish Hills at Michigan and if the Cup Series will have 16 or more winners with just three races left until the playoffs.

Sign up for Stock Car Scoop on Apple Podcasts and Spotify or visit Frontstretch every Monday and Friday throughout the year.

Didn’t even read the article. But as to the question…NOOOOOOOOOOOOOOO. DUH

Same here, and I agree. They’ve pretty much sucked all year. Is it possible they could get hot and make a run? Statistically yes, but I don’t think SHR as an organization has it in them (this year) to get Harvick much further than maybe, maybe the first round. Kyle Busch is more likely to get hot and make a run.