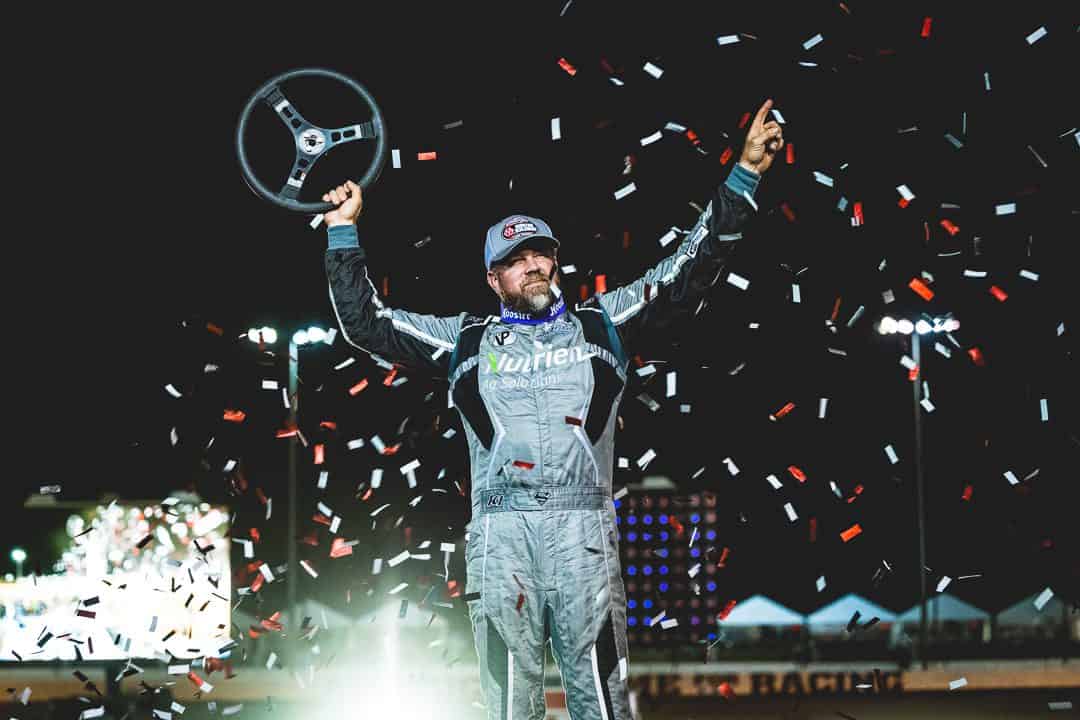 Another crown jewel, another flag-to-flag win. This time the checkers flew for Jonathan Davenport, who led all 100 laps of the USA Nationals finale Saturday night (Aug. 6) at Cedar Lake Speedway.

One week after seeing Brandon Sheppard lead all 100 laps of the Prairie Dirt Classic, Davenport proved imitation is the sincerest form of flattery, wiring the finale feature of the USA Nationals to score his third career win in the crown jewel race.

Davenport did face a couple challengers over the course of the event, the most notable of which was Tyler Erb, who threw a series of successive sliders at Davenport that appeared to prevail immediately before the race’s first caution flew on lap 36, rendering the pass incomplete. As with many features in 2022, Davenport saw Chris Madden get to within a few car lengths in the closing laps on the high side before prevailing.

Among the World of Outlaws late model regulars, the top finisher was Max Blair in seventh, with current series points leader Dennis Erb Jr. one spot behind in eighth. The USA Nationals feature on Saturday did not run for points.

He may not have won the race, but Tyler Erb’s return to the USA Nationals was in fact the show on Saturday night. Erb, for those unaware, was banned from World Racing Group events for a calendar year after a violent incident on track with Bobby Pierce under caution in the 2020 version of this event.

Fast forward to this weekend, and Erb threw more slide jobs than any two drivers on the track Saturday night, landing on the podium by race’s end. Of note, a mid-race battle between Pierce and Erb on the track for a top-five spot was aggressive and squeaky clean.

Shannon Babb’s fans are used to seeing him racing for far more than top-10 finishes, but given the way his 2022 season has gone, to see him finish ninth in a major race was a big step forward.

It wasn’t in the USA Nationals A-main, but longtime WoO series veteran Brent Larson may have been the feel-good story of the weekend with his second-place finish in Thursday’s preliminary feature in front of his home crowd. DirtVision to their credit interviewed Larson about that result over the weekend.

Earlier today, last night's runner up, @BrentLarsonB1 spoke about tying his career best finish with the @WoOLateModels, and doing so in front of friends and family at the USA Nationals @racecedarlake! pic.twitter.com/clZSLCJAAV

On the one hand, Mike Marlar won Thursday’s preliminary race and finished sixth in a very good-paying feature…

But, Marlar finishing sixth in Saturday’s USA Nationals feature snapped a 23-race streak of finishing in the top five for the “Winfield Warrior.”

Pierce was running in fourth and putting on a show trying to get around Madden in the top five before suffering from a punctured radiator that parked the No. 32 car under a lap 61 yellow.

2014 USA Nationals champion Jimmy Owens brought a brand new racecar to Cedar Lake but ended up behind the wall only 29 laps into the feature.

Hudson, Wis.’s James Giossi suffered a mechanical failure while in a transfer spot in the closing laps of the last Last Chance Showdown (more on that later) and missed the USA Nationals feature, also forcing Gordy Gundaker into a spin on track while trying to get into the infield.

A picture’s worth 1,000 words, so to reiterate for the umpteenth time why I hate passing points, here’s the matrix needed to actually calculate them. If we’re going to insist on bringing all the joys of math class to the racetrack, is it too much to ask for whole numbers?

Here is the passing points chart for tonight's Heat Races at @racecedarlake. pic.twitter.com/t38E7eQUBb

USA Nationals winner Davenport remarked in victory lane that he got just enough signals from his crew during the race to keep challengers Erb and Madden at bay. This is despite the edict from the World of Outlaws tour that signal sticks are banned. Crews will always find ways to communicate with their drivers on track unless they’re handcuffed for features, so maybe it’s time to end such a toothless prohibition.

Watching the preliminary action Friday night, I’m a fan of late model dashes. If WoO is going to insist on a redraw format why can’t we have what the sprint cars always get? Of course, there’s a valid question to be asked about why a race program that had enough preamble to fill a textbook needed a redraw as well.

@WoOLateModels @racecedarlake PSA: If you run a double heat format using passing points, drivers earned their starting spots by busting their ass in both heats.. Get rid of the stupid redraw and dash and start them in the position they earned! CONGRATS on gifting JD the pole!!

Credit is due to DirtVision for FINALLY getting the USA Nationals included as part of an annual subscription. For years, this was the only late model event on the schedule that was not included in said subscription, and while this is a big race, it’s not big enough to command that sort of exception.

Having said that, this was the first time I’ve actually watched the USA Nationals. And good God, what a bloated program! Yes, Saturday’s feature was good, and Cedar Lake is obviously a well-run facility. But there is NO reason this program should last three days. Friday night saw 10 heat races, a dash and an exhibition dash get run, all leading into Saturday that saw two last-chance races run, then a third last chance race run, before getting to a 100-lap feature.

WoO commentator Rick Eshelman may have been joking when he referred to the actual last-chance qualifier as the “final final final final final chance” to make the USA Nationals field, but no joke, qualifying for the USA Nationals was more convoluted than a European soccer tournament. In this day and age, where $50,000-to-win features are the norm, rather than the exception, either this event needs to be dialed back to two days or go to a feature-every-night format where there’s real money available each night.

I absolutely miss hearing “Sirius” as pre-race music given that the World of Outlaws sprint cars continue their asinine Whiskey Myers promotion during their events, but damn if the late model guys didn’t overplay it like a top-40 pop song Saturday night. On a loop for the entirety of a 28-car, one by one driver intro. Then on the pace laps prior to the four-wide salute. Then on the final pace lap before the feature went green. Though dragging it out was on theme for the USA Nationals…

Preliminary races to qualify for the USA Nationals A-main.

Where it Rated (on a scale of one to six cans with one a stinker and a six-pack an instant classic): We’ll give the USA Nationals three-and-a-half cans of Milwaukee’s Best. The feature race was decent, especially the top-five battle between Erb, Madden and Pierce (while it lasted), but it took FOREVER to get to said feature. I love racing, but not creating racing just to fill a docket.

Up Next: Thinkin’ Dirty is putting on wings this coming weekend, with the annual Knoxville Nationals hitting the track for 410 sprint cars. The $150,000-to-win crown jewel race will have coverage available on DirtVision for annual subscribers and on pay-per-view.