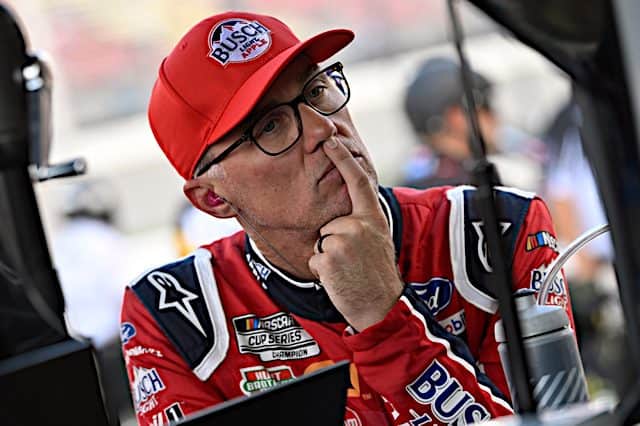 It was easy to wonder whether Kevin Harvick had seen victory lane for the final time. After all, it happens to every driver sometime, and it had been more than 60 races since Harvick, the oldest full-time Cup driver at 46, had enjoyed the fruits of victory last.

But Harvick and Michigan International Speedway have been a magic combination in recent years. He’s won five of the last seven races at the 2-mile oval dating back to 2018 and his six total victories make him the active win leader with double the total of the next drivers on the list.

Harvick didn’t have a dominant car, nor did he take a gamble. He won the way veterans do, putting himself in the best position to capitalize, and when he was able to pass then-leader Ty Gibbs for the lead on the final restart, he didn’t look back, leaving the competition to sort it out in his mirror. The Closer, indeed.

And really, how could he lose? After seeing her older brother, Keelan, get a victory lap with Dad after his last MIS win, daughter Piper asked her father before the race to please win so she could have a ride too. And Dad delivered.

And don’t forget Joey Logano. He’s struggled this summer. Since winning at World Wide Technology Raceway at Gateway, he has just two top 10s and four finishes of 20th or worse. His fourth-place result on Sunday is Logano’s first top five since Gateway.

The Fords in general haven’t been quite in step with the Toyota and Chevrolets for much of 2022, so having three top fives on Sunday was a big positive for the manufacturer. For Logano, it’s some forward momentum as the regular season nears its end.

Sometimes it’s not even about the racing. On Thursday of race weekend, Kyle Busch and his family were spending some downtime at the Mall of America when a fight turned into a shooting situation in a hurry.

Busch, along with son Brexton and wife Samantha, got out safely (as did everyone; there were no fatalities, fortunately).

The incident highlights the human side of the sport. Busch certainly gets a mixed reaction from fans, but there was support for him and his family on social media after both Samantha posted the update that all was well. Rooting against a driver on the racetrack is one thing, but when push comes to shove, the NASCAR community stood behind one of its own. Some fans might have been happy to see Busch crash out of the race early on Sunday for a 36th-place finish, but they were all grateful he was there to race.

Pole winner Bubba Wallace had a good car, but mistakes by the driver and team left him midpack after stage one. But you can’t keep a fast car down and a combination of smart strategy and smart driving brought the No. 32 back into the mix late when the Ross Chastain–Christopher Bell caution put the team in a great position to capitalize. Wallace drove his way to second but ran out of time to run down Harvick for a chance at the win.

It was the kind of solid day that leads to more, though. The team didn’t panic, overcame their early struggles, and put themselves in a great position. They’ll remember that next time, and it’ll come easier.

Defending race winner Ryan Blaney had a good car, but not a great one. Despite Harvick’s win, the Fords weren’t as strong on Sunday as they have been at Michigan in the recent past. Blaney made the best of what he did have and was able to be in the mix at the end, finishing fifth. That’s important as Blaney is currently the only driver in the playoff picture on points, but Martin Truex Jr. is only 19 points behind Blaney, so if it does come down to points, Blaney is still vulnerable.

Austin Hill, making his Cup debut, wasn’t spectacular, but that’s just fine. Hill drove the No. 33 to an 18th-place finish, on the lead lap. A penalty for a crew member over the wall too soon on lap 126 meant Hill had to start at the back of the pack, but the rookie did manage to stay calm and get the job done. Whether Hill lands a full-time ride at Richard Childress Racing in the future (and confuses everyone who shouts for “Austin” in the shop only to be answered in stereo) remains to be seen, but his debut was a solid one.

One caution, and the lack of another, turned the tide for Harvick on Sunday. During a cycle of green-flag pit stops, Bell and Chastain were fighting for what would have been the race lead if the cycle completed without incident.

But it didn’t. Chastain made a move to Bell’s outside and Bell moved to block just a moment too late. The two made contact and spun, bringing out the caution and changing the complexion of the race entirely. Harvick stormed to the lead on the restart and left the field to race for second, thanks in part to a caution that didn’t happen.

A flat tire for Daniel Suarez could have spelled disaster for Harvick with just four laps to go if the caution allowed Wallace and Hamlin a crack at him. Suarez made it to pit road by the skin of his teeth, though and disaster was, for Harvick, averted.

The Cup Series hits Richmond Raceway, the only remaining short track in the regular season. There are a couple of reasons to keep an eye on this race.

One, of course, is the playoffs. For drivers who haven’t secured a spot with a win, which at this point is probably the only way the field changes (though Truex does have room to pass Blaney in points), the chances are running out.

The chance of more than 16 different winners is still a real one, so not even the race winners can rest on their laurels if they want some momentum entering what looks like the most unpredictable playoffs in years thanks to the Next Gen car, which hasn’t allowed any team to gain a massive foothold.

But the spring Richmond race, despite also being an afternoon affair, was not the Next Gen’s finest hour. The car struggled to produce a great show at both Richmond and Martinsville Speedway in the spring.

Have the teams learned enough to put on a more competitive race this time around? If they haven’t, perhaps it’s time for NASCAR to make some changes, allowing more horsepower at the smaller flat tracks.

It’s very concerning. It certainly raises questions about Busch’s long-term health and whether he’ll be able to return this year or at all. The No. 45 team is hopeful for Busch to be in the seat for Richmond, but concussions have their own timeline, so that may or may not happen. Busch will get a playoff waiver from NASCAR, as he should under the circumstances, but that could be the least of his or his team’s worries as the situation drags on.

It also has reignited questions about the safety of the Next Gen car. Those cropped up after a safety test last year at Talladega and were never really answered with any data from NASCAR.  Busch wasn’t cut from the car or carried away on a stretcher—he climbed from the car and walked off the track under his own power, but as time goes on, it’s clear that the crash was worse than it looked.

And it does give pause. Was it a fluke incident where Busch hit at just the wrong angle, or are drivers at greater risk than they were a year ago?

It was good to see Old Man Harvick cracking a smile again, but it would be even better if Kurt B was healthy enough to dress in his firesuit and ready to strap in @ Richmond.

yeah i like seeing the older drivers do well. makes me sad as this is about the 3rd or 4th time i’ve seen a group aging and looking at retirement.

The playoff picture is becoming clearer, but there are still a couple of wild card races ahead.

Every team, & sponsor want’s to be in the PO field, & at 16 cars almost half the field will make it.

The next big PO hurdle, will be making the first cut. After the points reset, when the POs start, teams light on stage wins, & or multiple regular season wins, will have a steep hill to climb.