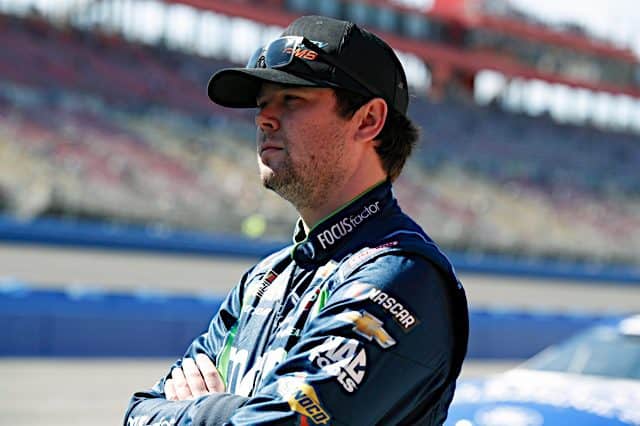 Michigan International Speedway is a special place for Erik Jones. The Byron, Mich. native grew up just over an hour away from the track and dreamed of racing there. Now, Jones has collected not one, but two top-10 finishes in his NASCAR Cup Series career at MIS with an eighth-place showing in the FireKeepers Casino 400 (Aug. 7).

With Michigan having similarities to Auto Club Speedway, it was the perfect opportunity for Jones to have a strong run in his mission to burst the playoff bubble for several others. After all, the Petty GMS Motorsports driver finished third at Auto Club earlier this season.

The No. 43 FOCUSfactor Chevrolet showed speed all weekend, starting out with a 10th-place qualifying run. When the race finally began after a weather delay, Jones immediately charged up to sixth by lap 15.

A competition caution split the field strategy-wise, as Jones stayed out to move up to the front row. He held strong in the closing laps of stage one, finishing the stage in third.

Jones’ speed continued to be on display in stage two, as the hometown driver ended that one in sixth to attain 13 stage points on the day, the third most of any driver.

A yellow with about 40 laps remaining was exactly what Jones needed as he struggled with a tight-handling car. He immediately got back to business, driving from 11th to fifth with just over 30 laps to go. Jones then held steady in the top five for several laps before relinquishing a couple of spots to wind up eighth.

The top 10 was Jones’ first in the Irish Hills since a third-place run in his rookie season. While a win is certainly the team’s focus with three regular season races remaining, it was a great result for both Jones and crew chief Dave Elenz, who is a Michigan native himself.

The success of Jones’ season can be put in perspective in multiple ways. Eighth at Michigan would have been considered a win for this team in the past. Now? It’s almost a disappointment. Jones now has racked up eight top 10s on the season, the most a Petty-affiliated car has achieved since Marcos Ambrose had 12 in 2012.

Examining the standings goes to show just how much parity the Next Gen car has brought and how it has affected Jones. He sits 14th in regular season points, which would have him in the playoffs if it were based on points alone. Unfortunately for the No. 43 team, the system rewards wins and 15 different winners leave just one spot open, putting Jones in a must-win situation.

But there’s hope yet for this underdog down the stretch. Based on runs at Talladega Superspeedway and Atlanta Motor Speedway, it would not be too shocking to see the King’s No. 43 sitting in victory lane at the regular season finale in Daytona.

Just like the 18-year-old phenom we saw take the NASCAR Xfinity Series by storm, winning in his series debut at the Daytona International Speedway road course a year ago, Ty Gibbs is a quick study running a Cup car. A day after winning the NXS race at the 2-mile track, Gibbs continued his substitute role for an ailing Kurt Busch in 23XI Racing’s No. 45 Toyota, who is hoping to return at Richmond Raceway next week.

The now 19-year-old driver made the most of it, earning his first career top 10 in just his third career start by finishing 10th.

In comparison to his fellow Toyota stablemates, only 23XI Racing co-owner Denny Hamlin earned a top 10 quicker, finishing inside the top 10 in his second Cup start. The result was even more impressive considering Gibbs was hit with a speeding penalty on pit road during the final stage, forced to fight from the rear over the final 35 laps of the race.

Finishes of 18th, 17th and 10th in Gibbs’ first three starts are impressive, especially with the difficulty of the Next Gen car. Michigan may very well have been his last Cup start of 2022, but it certainly does not take much insight to know that Gibbs will soon be a regular at this level.

Behind him, Ty Dillon earned his best finish in over two months with a 14th-place run. A week removed from being on the receiving end of a still-mysterious spin from Kyle Larson that resulted in violent impact, Dillon avoided a pileup in stage one to earn his first top 15 since the Coca-Cola 600.

The result is definitely what the doctor ordered for Dillon, who had a tumultuous month of July that included three DNFs, the violent crash at the Indianapolis Motor Speedway road course and the pending loss of his job. The Welcome, N.C. native continues his audition for a 2023 ride after mutually agreeing to part ways with Petty GMS following the season.

Justin Haley earned his fourth top 20 in five races with a 17th-place finish despite an ill-handling car. Haley’s setup for the race mirrored that of Tyler Reddick’s Auto Club setup, a race where Reddick led 90 laps. Unfortunately, the car did not respond as well as Haley battled tight-handling conditions most of the race.

Austin Hill was able to match the finish Gibbs had in his debut with an 18th-place run of his own in Richard Childress Racing’s No. 33. Hill made contact with Cody Ware on pit road during the competition caution but sustained minimal damage in the process. After a slow start, Hill gradually worked his way into the top 20 and got as high as eighth at one point during green flag pit stops. It was a solid result for a driver who RCR may be grooming for its Cup program in the near future.

Corey LaJoie’s 19th-place run was his third consecutive top 20, giving him 11 on the year – the most he has attained during a single season. Spire Motorsports teammate Josh Bilicki earned his best finish on a non-superspeedway with a 21st-place showing.

Fans got a glimpse of the future in Cup among Gibbs, Hill and Noah Gragson. Gragson was flexing his muscles in Kaulig Racing’s No. 16 Chevrolet, finishing 12th in stage one and driving up to fourth in stage two at one point. Unfortunately, Gragson’s strong run was derailed when he hit the wall and broke a toe link on lap 109. The 30th-place result overshadows what was an impressive run for another driver who seems destined to be at the premier level soon.

Two young drivers both having issues on the same lap.

Take a look at what happened to Noah Gragson and Ty Gibbs. #NASCAR

Michael McDowell’s career year seemed like it was going to continue as the Front Row Motorsports driver was running inside the top 10 in the early going. But as soon it was looking up, his day came crashing down after getting involved in a multi-car crash on lap 25. The wreck relegated McDowell to 28th, 13 laps off the pace.

Erik Jones (eighth): “It was an up-and-down day for the FOCUSfactor Chevy.   We had track position early and got up there toward the top five and just kind of got farther and farther back through the day a little bit.

“Lost the handle a bit toward the back half of the top 10 and thankfully, we got that late yellow and were able to make some changes and get a good restart with about 37 laps to go and drive back up to a top-10 finish. So, solid day, had a decent car and just needed to do things a little bit cleaner, little bit smoother and I think we could have had a better finish.”

Martin Transportation Systems returned to Front Row Motorsports and McDowell’s No. 34 Ford Mustang in red, white and black colors. I may be a bit biased considering these were my high school’s colors, but the scheme certainly popped on the track. Unfortunately, the hood popped up at one point, too, as a result of the crash shown above.

"I was hoping it would free up but, umm, yeah, nooooooo. On the plus side, my cold shirt is ICE cold!" @Mc_Driver always looking at the positives@DRIVEforMTS | @LovesTravelStop pic.twitter.com/FpneicAH4o