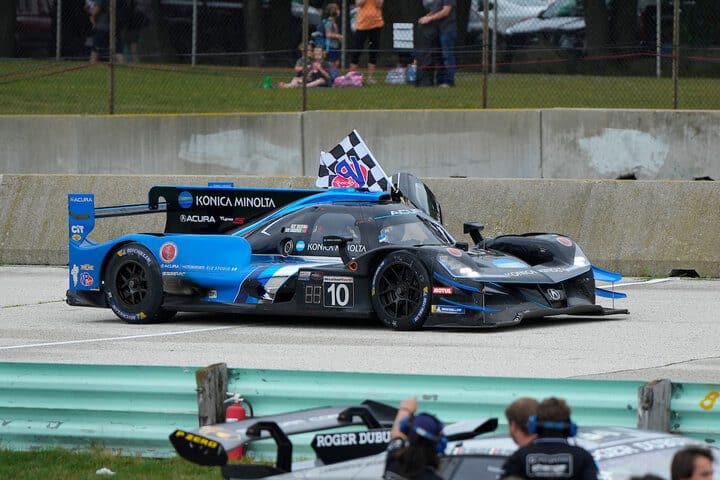 Wayne Taylor Racing’s Filipe Albuquerque and Ricky Taylor were able to hold off a charging Oliver Jarvis in the later stages of the race to win the IMSA Fastlane SportsCar Weekend event at Road America Sunday (Aug. 7) in changeable weather.  It is Albuquerque and Taylor’s fourth victory of the year.

“I needed to re-invent myself,” Albuquerque told NBC Sports’ Matt Yocum in victory lane.  “I knew that [turn 7] was tricky when [Jarvis] got in there.  I said, ‘this is me, [I’m] coming,’ and went to his left.  It was a big moment over there.”

Unlike the rest of the week, the race went green Sunday morning under threatening skies.  Albuquerque led from the pole and opened up a couple of seconds on the pack in the opening laps.

While the heavy rains that had marred the preliminary Porsche Carrera Cup North America race early in the morning were gone, the opening laps did see some mist falling.  The weather forecast for the race did result in IMSA making a late change to minimum drive-time rules, cutting it to 30 minutes.  This was more or less designed to prevent the issues from Watkins Glen that resulted in nine teams being given post-race penalties.

The caution came out early on when PR1 Mathiasen Motorsports’ Steven Thomas spun in turn 8 after contact from High Class Racing’s Dennis Andersen.  No harm, no foul at first.  Then, he tried to turn around.  He tried to spin his ORECA 07-Gibson around on the wet grass and managed to get his rear wheels stuck in the gravel trap, requiring assistance.  The 30-minute mark was reached by the time the pit lane opened, so nearly the entire field pitted under the yellow.

At this point, the rain started to pick up, but not before a number of teams had put fresh slick tires on.  As a result, things got rather slippery.

Action Express Racing’s Pipo Derani spun out in turn 14 after his car twitched under braking.  Others had to tip toe around.  JDC-Miller MotorSports’ Richard Westbrook took rain tires during the caution, which turned out to be a good move.

The heavier rain lead to the rest of the DPi teams heading to the pits for wets.  Jarvis was the first to do so.  Everyone else follows.  The result of this was that Westbrook ended up with a lead of nearly two minutes in class.

That massive advantage was usurped by a caution due to debris.  That, along with a drying track surface, brought everyone to the pits for another round of stops.  Tristan Vautier continued to lead until another yellow flew.

In this situation, Andretti Autosport’s Gabby Chaves ran wide at turn 13 and got into the wet grass.  He plowed through a VP Racing Fuels advertising placard, then slid back out onto the track, directly in front of Sean Creech Motorsports’ Malthe Jakobsen.  Jakobsen was forced off the road, into the wall, then into the trap in turn 14.  Chaves was able to continue, but ended up a lap down.  Jakobsen was out on the spot.

Another round of stops here saw Jarvis get out of the pits first as the Meyer Shank Racing with Curb-Agajanian pit crew performed a short fill on his stop.  That put him in the lead with Albuquerque second and Vautier third.

For much of the final run of the race, Jarvis and Albuquerque battled hard for the lead.  At one point, Albuquerque was shoved wide at turn 1 into the runoff.  With 25 minutes to go, Albuquerque got a big run on Jarvis exiting turn 7.  He had to dodge the Rick Ware Racing Acura of Ryan Eversley and clipped the grass, but he was able to make the pass under braking for turn 8.

Jarvis still continued to pressure Albuquerque as they constantly dealt with slower GTD and GTD Pro traffic.  This allowed Earl Bamber in the Chip Ganassi Racing No. 02 Cadillac into the fight.  With nine minutes to go, Jarvis drove too shallow into the Kink.  As a result, he went off the track before spinning back across the track and hitting the wall head-on.

While Jarvis was able to immediately drive away from the scene, the track was littered with carbon fiber pieces and mud, forcing IMSA to call a caution.  With too little time remaining to get the track cleaned up and potential damage to the barrier, the race ended under caution, giving Wayne Taylor Racing the victory.

Chip Ganassi Racing’s Bamber and Alex Lynn ended up in second, followed by Sebastien Bourdais and Renger van der Zande.  Jarvis and Tom Blomqvist were able to hold on to finish fourth despite the front end damage and a right front tire that just barely made to the checkered flag.  Vautier and Westbrook ended up fifth.

LMP2 saw PR1 Mathiasen Motorsports teammates Steven Thomas and Patrick Kelly start on the front row.  It did not take long for Kelly to snatch the lead away from Thomas.  Once out front, Kelly ran off and hid.  Within 25 minutes, Kelly had 45 seconds on Thomas, who had fallen into in a three-way battle for second with Era Motorsport’s Dwight Merriman and Andersen.

Unlike the DPi class, most of the LMP2 teams changed to wet tires during the first caution.  That put everyone in good position to move up the overall order.

With driver changes during the caution, Josh Pierson won the race off pit road in the No. 52, but very quickly lost the lead to Tower Motorsport’s Louis Deletraz.  Within a few laps, Deletraz had driven up to second overall with DragonSpeed’s Juan Pablo Montoya giving chase.

Ultimately, the race came down to a race between Deletraz and Ryan Dalziel, who was quickest in practice on Friday.  The two raced each other hard, but Dalziel was able to get past for the lead with 12 minutes to go.  From there, Dalziel held on to give Era Motorsport the win.

Deletraz and John Farano were second, followed by Andersen and Fabio Scherer.  PR1 Mathiasen Motorsports’ Thomas and Tristan Nunez were fourth, while Kelly and Pierson were fifth.

Jakobsen started from the pole in LMP3 and led early over Jarett Andretti and Cameron Shields.  Then, the pit stops shook the order up.  Chaves won the race off of pit road in class.  His time at the front was short-lived as Riley Motorsports’ Felipe Fraga was able to take the lead just after the restart.

The aforementioned Chaves-Jakobsen crash took the second and third-place teams in class out of contention.  That elevated the Duqueine of Andrew Wojteczko Autosport’s Matt Bell into second.  Unfortunately, Bell was unable to do anything to keep the duo of Fraga and Gar Robinson from taking their third win of the year.

GTD Pro was a battle for nearly the entire race between Pfaff Motorsports’ Porsche and VasserSullivan’s No. 14 Lexus.  Jack Hawksworth started from the pole in the Lexus and led early on with Matt Campbell giving chase.

In the dry, the Lexus appeared to have the upper hand.  However, the Porsche appeared to have an advantage in the wet.  At the one-hour mark, Mathieu Jaminet was able to get past Ben Barnicoat to take the class lead and pulled out a small lead.

After the second caution, Barnicoat was able to take the lead back on the restart.  For the remainder of the race on the drying track, Jaminet tried his best to get back to Barnicoat and get back past, but was unable to do so as the Lexus duo took their first win of the year.

Corvette Racing’s Antonio Garcia and Jordan Taylor finished third, followed by The Heart of Racing’s Ross Gunn and Alex Riberas.  BMW M Team RLL had electrical problems in the opening 10 minutes that resulted in John Edwards having to reset the car.  They never recovered from the issue.

Turner Motorsport’s Robby Foley led from the pole and ran well until the rains came.  Bill Auberlen got in the car at that point, but it appeared that the Turner BMW didn’t put him on wets.  As a result, Auberlen got swamped on the restart and ended up in ninth.

Team Korthoff Motorsports’ Mike Skeen ended up in the lead with WeatherTech Racing’s Daniel Juncadella giving chase.  It only took a few laps for Juncadella to take over the lead and pull away.

Juncadella ultimately made a mistake in the pits that ended his chance at winning.  During the third caution, Juncadella ran the red light at the end of the pit lane.  That resulted in a stop and 60-second hold that took him out of the hunt.  Juncadella and Cooper MacNeil would eventually finish 11th.

Auberlen ended up back in the class, but in a fierce battle with Winward Racing’s Philip Ellis.  Ultimately, contact was made and Auberlen spun out in turn 8.  This move was not penalized.

Auberlen’s spin gave Ellis the lead, just like he had a couple of weeks ago at Lime Rock Park.  This time, the Mercedes held together to give Ellis and Russell Ward their first points win of the year (Ward and Lucas Auer won the Motul Pole Award 100 at Daytona during the ROAR Before the 24 in January, but that only gave the team the class pole for the Rolex 24).

CarBahn Motorsports with Peregrine Racing’s Robert Megennis and Jeff Westphal were second in their Lamborghini, followed by Frankie Montecalvo and Aaron Telitz in the No. 12 VasserSullivan Lexus despite multiple instances of contact and bodywork flying off.  Paul Miller Racing’s Bryan Sellers and Madison Snow finished fifth, while NTe Sport’s Jaden Conwright and Marco Holzer were fifth.

From here, there is a split schedule for the remainder of the IMSA WeatherTech SportsCar Championship season.  The next race is the Michelin GT Challenge at VIR on Aug. 28, which will feature only the GTD Pro and GTD classes.  That race will air live on USA at 2 p.m. ET.  The prototype classes will not be back in action until the Motul Petit Le Mans at Michelin Raceway Road Atlanta on Oct. 1.