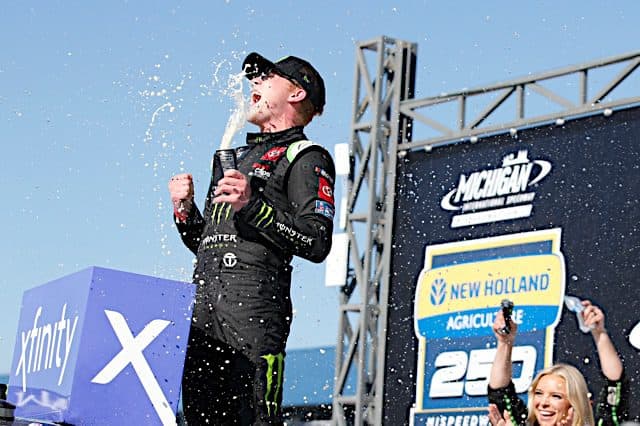 Ty Gibbs won his fifth race of the 2022 season on Saturday (Aug. 6) in the New Holland 250 at Michigan International Speedway ahead of Justin Allgaier. Noah Gragson finished third, followed by Brandon Jones. Austin Hill rounded out the rest of the top five the day before his NASCAR Cup Series debut.

Gibbs was able to pull the rug out from underneath his fellow playoff-bound competitor Gragson to take the checkered flag. Gragson swept the first two stages, leading the entirety of stage one before barely edging out AJ Allmendinger for stage two.

The race marked Gibbs’s ninth win in 39 starts, setting his winning percentage at an astonishing 23.08%.

If you’re a fan of green-flag racing, this one was for you. The race ran caution free from the restart on lap 68 all the way to the finishing lap at 125, making this one a competition of pit strategy and conservation. We don’t need cautions to have fun in this column, though, so let’s dive in.

If you thought you were seeing double yesterday, there are two possibilities. Either A) you could have hit the sauce a little hard in that pregame for the race, or B) you were just seeing Jordan Anderson Racing‘s two identical cars.

Going to be seeing double this weekend!

Pretty cool opportunity to have the 31 and 32 hit the track in Michigan with @MyattSnider and myself behind the wheel in matching @BommaritoAuto Chevrolets! 🙏🏼

Grateful to have Sefton Steel and @ImpactbyMCS help make this all possible. pic.twitter.com/HnG2IPUmna

Now typically, something like this wouldn’t make our winners list, but when it’s a small team like JAR, it catches my eye. Not only do these Bommarito Auto schemes look phenomenal, but for this small of a team to have the kind of funding to field a pair of entries is a big step forward in the right direction. The team’s full-time driver Myatt Snider ended up 17th, while owner Jordan Anderson failed to qualify.

The story of Brandon Brown and BrandonBilt Motorsports has been one that has piqued the interest of those in tune with the Xfinity Series in the last few weeks. Brown shared a few weeks ago that due to funding, he will be taking on a smaller role as the team driver. But despite the news, he brought home a top-15 finish (13th, to be exact) for the small team he began his career with. If that doesn’t make you feel all warm inside, I’m not sure what will.

Allmendinger might have brought his ride home in seventh, but after his stage two door-to-door finish with Gragson, you have to think a top five was what Allmendinger had banked on. He still holds the points lead by a slim 19 markers over runner-up Allgaier, and as the regular season winds down, the 15 bonus playoff points are on the line ahead of this year’s championship battle.

Sheldon Creed needs a win, point blank, and with five races remaining in the regular season, time is running out. The 2020 Camping World Truck Series champion moved up this season, along with some high expectations. That hasn’t changed but he’s largely disappointed with six DNFs and just eight top 10s in 21 races. Creed is right on the bubble of the playoff window in 13th, 52 points behind Ryan Sieg.

It’s hard to find many big losers during such a long green-flag race that can’t be found via the simple race results, but these two have high stakes pinned on the points standings and Saturday played a big role in those, to say the least.

Nowadays there’s a new crypto sponsor every week, and I think I’ve found a common theme between almost all of them.

.@sam_mayer_ now heads out for his lap in the @BUSD_X Chevrolet.

They all look badass, for the most part, especially this BUSDX-sponsored ride that Sam Mayer wheeled around this week. The flame-colored shading goes perfectly with the black base and makes for some interesting shades in the sunlight. I don’t care how many odd and end cryptos wind up sponsoring cars as long as they’re all as good looking as this.

Gibbs now has five wins in his first full-time season in Xfinity. We all knew that he was at least a half-decent driver with exceptional equipment coming into the year, but I don’t think anyone could have predicted this.

Not only has Gibbs been utterly dominant throughout the year, but we’ve had the pleasure to watch a young man grow up a lot over the course of the season. You’d be a fool not to at least think he has a great chance at taking home the championship, and if that does wind up happening, it really could shake up this year’s Silly Season.

CHECKERED FLAG: @TyGibbs_ adds yet ANOTHER win to his young #XfinitySeries career!

Team presidents and representatives can say what they want, but as of right now, Kyle Busch‘s Cup Series future with Joe Gibbs Racing is still up in the air as the search for sponsorship continues. The team has made it very public knowledge that they want Busch back in Cup and Gibbs back in Xfinity, but if a deal doesn’t get done and Busch walks, who fills the seat?

There are plenty of options, but if Gibbs wins the Xfinity championship, it almost has to be him. If it’s not, the team has arguably the biggest shoes in the sport to fill along with the biggest hole in its wallet to patch up. The youngster brings youth, talent and quite the personal following with him along with that famous last name. Only time will tell, but I’m sure if you were to ask him, Gibbs would rather make the jump sooner than later.

The Xfinity Series will take next week off, but don’t fret, we’ll return to Watkins Glen International on Aug. 20. Gibbs won this race last season as a part-timer and will be looking to add the sixth notch to his win total on this season in his return to the New York road course. That green flag drops at 3 p.m. ET and can be found on USA, the Motor Racing Network and Sirius XM NASCAR.