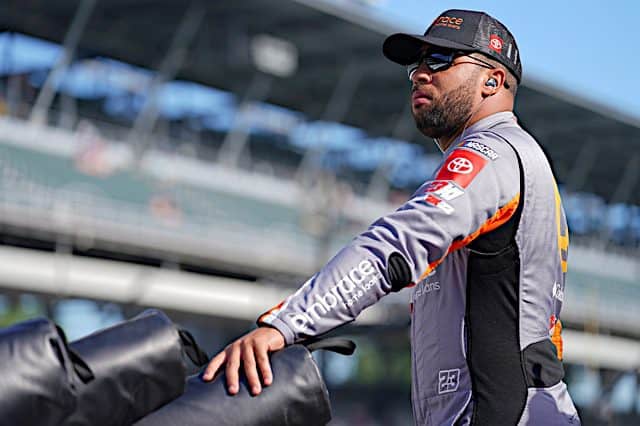 Anytime someone opines that a driver maybe just does not have it anymore, I go back to what I was told in the 2000s by a NASCAR Xfinity Series veteran when we were discussing the plight of a former champion mired in a tough slump.

That was proven again on Sunday afternoon (Aug. 7) at Michigan International Speedway in the NASCAR Cup Series.

Given his spot in the standings and good ol’ lady luck apparently choosing to abandon the No. 4 team at Stewart-Haas Racing in recent weeks, many casual observers wrote off the chances of Harvick winning in 2022.

But much like the “Man In The Arena” speech, Harvick, crew chief Rodney Childers and everyone else on the team showed that it matters not what the outside world says. Instead, what matters most is what those inside the walls of SHR think and believe, and the season may have indeed turned for Harvick with his Michigan victory.

Harvick knows how to win — and win in clutch moments. The same can be said for his crew chief. Remember, just two years ago, the regular season was Harvick, Denny Hamlin and everyone else.

Momentum is a powerful thing in racing, and Joey Logano holding up Bubba Wallace in the closing laps at MIS may have helped awaken a sleeping giant.

2. Is this the year of the playoff busters?

As Sunday’s race ended, the field saw multiple drivers without a win this season near the front. Had things gone differently, Wallace, Martin Truex Jr., Ryan Blaney, Erik Jones or Austin Dillon could have gotten their first win of the season.

Instead, it was Harvick.

But with so few playoff spots left and possibly more winners than postseason positions, there’s a very real scenario that could give us very strong drivers and race teams not in the playoffs but very capable of winning.

See also
Thinkin' Out Loud at Michigan: Kevin Harvick, Sorry for Doubting You

We saw Tony Stewart do that in 2006, winning three times in the playoffs despite not being among the drivers in that year’s playoff format. He kept drivers racing for a title from picking up more points.

With so many drivers capable of winning, it’s not out of the question that 2022 could be more of the same. These playoff busters could interject and keep a driver from advancing by winning a race for themselves.

It could very well overshadow the title chase, and that’d be a welcome sight to fans who hate this championship format.

3. Do more tracks only need one race per year?

Sunday’s crowd in the stands and infield says yes.

I have always thought it odd that both Michigan and Pocono Raceway had repeat visits to their respective facilities within two months of each other. The weather is a factor, to a degree, but other sports play outdoors in the early fall and spring in that region.

When you have something so similar twice a year, it can be a bit monotonous.

The plan to spread things out and have just one race at Michigan and another elsewhere to give a different venue exposure appears to work. It only further gives weight to the argument that, with the exception of Daytona International Speedway and Charlotte Motor Speedway, no track should have more than one NASCAR weekend in a year.

Why race somewhere twice a year when you can liven up the schedule with a different venue and market to reach fans in? Even if you want to stay in the same region, why not race once at an existing track and another nearby at a similar venue; such as, for example, once a year at Talladega Superspeedway and once a year at Barber Motorsports Park?

Or what about an annual event at Richmond Raceway and one at Virginia International Raceway?

Plus, with only one race a year, as Sunday showed, fans are more apt to show up.

4. How much emotion is too much?

In a post-race interview that seemed to never end, a tearful runner-up Bubba Wallace fielded multiple questions from USA Network. Wallace being on camera was expected; he had just finished second and ran arguably his most complete race on a non-superspeedway.

At what point is enough enough, though? One question? That’s to be expected.

Wallace’s face had the words of the late Lewis Grizzard’s column after his beloved University of Georgia lost to Georgia Tech, when his entire column read, “Frankly, I don’t want to talk about it.”

Wallace’s self-deprecation — similar, by the way, to what we saw from Chase Elliott prior to his first win — has a place during post-race interviews. But there’s a thin line between taking raw emotion into fans’ living rooms and making things worse; Sunday’s post-race coverage flirted heavily with it.

Ty Gibbs fought his way to a top-10 finish, another solid run for a driver thrust into a spotlight for which he didn’t ask. But Gibbs is making the most of his chance, regardless.

With this much proven talent, it’s foolish to lock him down and relegate the teenager solely to the Xfinity Series next year. If Kurt Busch is not cleared to race full time, or perhaps in his potential final year if he opts for a part-time schedule similar to what AJ Allmendinger is doing at Kaulig Racing, Toyota would be knuckleheaded to not find a way to put Gibbs in a Cup car next year.

That’s even if it’s on a part-time basis. Otherwise, it’d be a waste of Gibbs’ time and talents.

Bubba carries a lot of pressure from many angles…driving for Michael Jordan, carry the banner for the black community. And knowing, judging from the many comments posted on this site, that he is going to be the target a lot of personal, derogatory speech. That’s a lot to handle. No wonder he gets so emotional.

On the flip side, I’d imagine he’s dealt with most of that (except driving for MJ, obviously) all his life. You’d think he’d have built up a mental wall and learned to block that crap out.

He has likely dealt with a bit of it but seeing how many hate comments he gets on a post about his wedding, his dog, or a simple sponsorship promotion is disgusting. I’d be more emotional/wore down after that too.

“Guys like that, they don’t wake up one day and just forget how to drive.”

Sometimes,, “Guys like that, they don’t wake up and just know how to race.”

lol and why does everyone think driving for MJ means you better be good or your gone. Look at his NBA team, he cares about the money, not a winning team. Look deeper and you will see that when he gets a player who developes into deserving more money, MJ trades them. Denny wants to win, MJ is still a gambler.

Just how sure are you that Gibbs isn’t going fulltime Cup racing next year?

With the KB thing still unsettled, I see it as real possibility.

Nobody complained about Michigan and Pocono until the new car and drivers arrived. Or anywhere else. How much does economics fit in?

Not sure where you were, but a TON of fans complained about Michigan and Pocono’s racing over the recent years, especially with the awful 550 hp package. And the Next Gen car put on 2 of the best shows those tracks have seen in a long time.

I said, “until the new car and drivers arrived.” You made my point!

Let me start by saying that I am a Bubba fan, and hope he has a lot of success. But his post-race interview was just bad. If you were the McDonalds executive that signed off on sponsoring a Nascar team, does that interview do anything to suggest that you spent McDonalds money wisely? He had his head down for most of the interview, so you couldn’t see any of the sponsorship logos. He barely mentioned McDonalds. And he whole energy and vibe did nothing to portray McDonalds positively.

I get that you have to mention sponsors. But these guys are drivers first and promoters 2nd. I don’t care about Mcdonalds after I just finished 2nd, I’m either celebrating a good run or getting to work in my head on how to get better.

You better care about McDonald’s after a race regardless, they are paying huge bills for him to race. This sport takes BIG money to just make the field. But he’s got nothing to worry about, even with his own admission of emotional/ mental instabilities.

Your right, bubba has nothing to worry about no matter how bad he does.

I respectfully disagree. It used to be that way, but considering that now the person who has the sponsorship gets the car, unless you’re the next coming of Richard Petty, Dale Sr, Jeff Gordon, or Jimmy Johnson, you best be a promoter first or the only team you’ll be driving for is Uber.

Yep, look at Aric Almirola and Smithfield. Someone there loves him.

A driver has to be able to go to a meeting with a potential sponsor and “sell” that he is a better fit than another driver. Back in the day a driver had to show his talent to get an offer from an owner like Jr. Johnson, the Wood Brothers, Richard Childress, Bud Moore and others with cars capable of winning.

VIR is a nice place to spend an afternoon in Southern Virginia. It is, though, in no way, shape, or form up to dealing with a Cup race. It has neither the infrastructure nor a wide enough racing surface to produce anything other than about 80 parade laps. There’s a very good reason why IMSA’s full cadre does not run there.

I say Gibbs goes to Cup for sure. Busch lucked into a win this year but look at his last 3 years. So why pay Busch a ton of money when you have young Gibbs who has a really good chance of winning in his first year. And you can get sponsors for young Gibbs in his first year easily because the cameras and TV talk will be about him. Kyle is in a tough spot here.