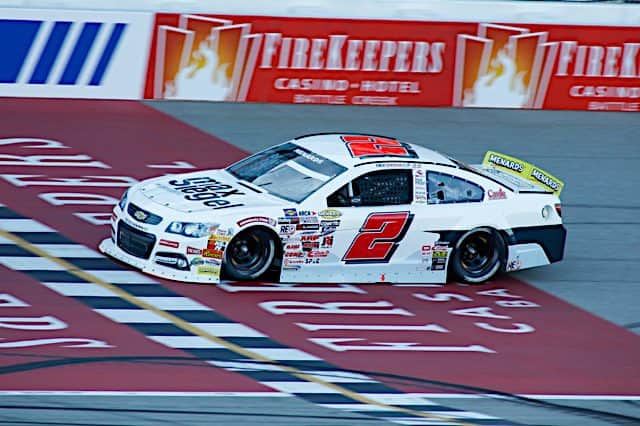 When the checkered flag flew on Saturday night (Aug. 6), Nick Sanchez became both the victor and new points leader.

Holding off Corey Heim by 0.456 seconds, Sanchez picked up his third win of this ARCA season and fourth in his career.

Sanchez now leads the points by seven over Rajah Caruth and nine over Daniel Dye.

Greg Van Alst’s ninth-place finish moved him up to fourth in the standings, with Toni Breidinger rounding out the top five.

As the ARCA competitors now enjoy an off weekend before competing twice in the following one, how did the shake-up in the points affect the power rankings?

Although the top three are separated by single digits, Sanchez’s three wins now tie him for the series high this season. Those three victories have also propelled him to the points lead.

Consistency throughout the ARCA season is important, but wins are also valuable commodities as this championship battle might not be decided until the season ends at Toledo Speedway in Ohio. Each ARCA win adds three bonus points, so Sanchez’s nine bonus points are the difference in the standings.

Although it was his seventh top-five and top-10 finish this season, Smith never really contended for the ARCA win at MIS. Still, Sammy Smith trails Brad Smith by six points and Amber Balcaen by 47. Sammy Smith could overtake both drivers in the points after the two next ARCA races, coming at Watkins Glen International and the Illinois State Fairgrounds.

Caruth is tied for the most top-10 ARCA finishes with 10, but he only has five top fives. He came up one spot shy of that mark at MIS, finishing sixth.

Caruth still has the best average finish of the top three contenders, but that margin has narrowed to less than 0.5. Moreover, among the top three, Caruth has led the fewest laps: 34 compared to Dye’s 224 and Sanchez’s 113.

When the race ended, Caruth parked his No. 6 Chevrolet on pit road, climbed out and then sat beside it for some time. He spoke to the medical staff and looked thoroughly exhausted; the 100-lap race took place on a very warm day.

Although ARCA will not have a race this upcoming weekend, Caruth will attempt to make the NASCAR Camping World Truck Series race at Richmond Raceway. It would be his second career start after he finished 11th in his series debut at World Wide Technology Raceway at Gateway.

During practice, Dye blew a right front tire and pancaked the wall. Although his GMS Racing team repaired his No. 43 Chevrolet, Dye did not qualify, so he started 19th. Dye rapidly drove through the field, though, ultimately gaining the most positions en route to a third-place result.

Daniel with the drive of his young career, to a solid third place finish at Michigan! The @GMSRacingLLC No. 43 @Helm1943, @daytona_garage Chevy was a rocket. Thank you to all our great partners for the support! 👊 [PR] pic.twitter.com/Z1DZnLrAUr

Post-race, Dye appeared in physical discomfort and was taken to the infield care center, where he was successfully treated and released. It was a hard-fought, long day for him, and continuous grinding like at MIS might make the difference for Dye in his quest for the ARCA title.

“This is my first race on a track like this, so to leave here with a third is great,” Dye said in a post-race press release. “It was super cool to run up front having Helm on board, and [I’m] really proud to be a part of this GMS Racing organization. [Crew chief] Chad Bryant made good calls all day to get the car better and we came out of here with a decent points day.”

Taylor Gray did not compete at MIS because he was ineligible due to his age (17). Nevertheless, Gray’s three ARCA wins this season leave him No. 5 on this list.

Gray is tied for the most wins, one shy of most top-five finishes (six) and has led the sixth-most laps despite not competing in five of the 12 events.

Gray will be back in ARCA competition for the next four races and seven out of the remaining eight, only missing Kansas Speedway due to age. Of those seven events, Gray has finished inside the top five at six of them.

Could Gray win the most ARCA races this season without winning the championship? It’s quite possible.