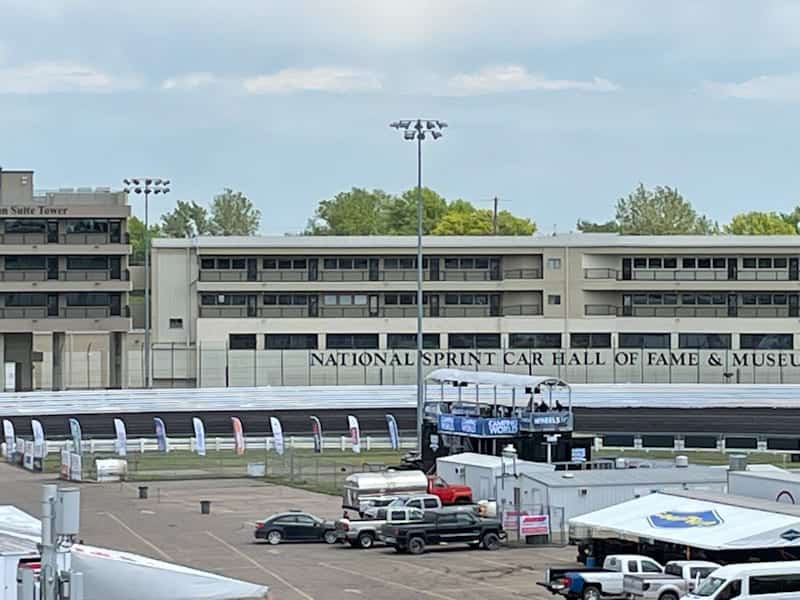 The pinnacle of sprint car racing comes this weekend with the return of the annual Knoxville Nationals.

The four-night event kicks off Wednesday evening (Aug. 10), so let’s take a look at six drivers Frontstretch has its eyes on heading into the crown-jewel 2022 edition of the race.

Yes, it was Allen’s Shark Racing teammate Logan Schuchart that dominated Sunday night’s (Aug. 7) Capitani Classic at Knoxville, the last tune-up race before the start of the Nationals. But 2022 has seen Allen assume the flagship position in the Shark stable. Allen, who has been racing on the World of Outlaws tour full time since 2014, won one race in his first eight years. This year, he’s won three.

Shark is no stranger to big-dollar race wins (the team won the $50,000 Jackson Nationals and the $75,000 National Open last year), and Allen has spent 2022 flipping the script on what to expect from the team. Of course, I could just be ignoring Schuchart’s own prowess because Allen’s the one driving the throwback scheme for the team full time this season.

Qualifying 4th is @JacobAllen1a! He will line up P2 in Heat 1️⃣. #ChompChomp
📸 @rubright22 pic.twitter.com/NYaUjKUEpk

A longtime Knoxville regular who’s contending for the points crown in 2022, Brown was expected to be a storyline heading into the Nationals on the heels of a strong showing during the King’s Royal weekend at Eldora Speedway. Brown’s had a resurgent 2022 campaign that has seen the No. 21 faster than it’s been in years courtesy of a new crew chief, longtime sprint car ace Danny Lasoski.

Well, Brown certainly was a storyline Sunday night in the Capitani Classic, but not how his team intended.

🔴 Brian Brown is upside-down at the exit of turn two on the start of Heat 5. He is out of the car.#CapitaniClassic #Xtream

It’s certainly preferable to wreck in Sunday’s lead-up race rather than in an actual prelim, but having to go through a car heading into a four-night program is not what the doctor ordered (the team did make repairs enough to win a B-main later on Sunday night).

Lasoski’s leadership and Brown’s confidence will absolutely be headline stories this week.

No, Larson has not been in the same form that saw him all but unstoppable on dirt in 2021 and 2022. That doesn’t change the fact Larson is the defending Knoxville Nationals champion and has still scored no shortage of dirt wins in 2022, scoring multiple victories in a micro sprint and four feature wins on the Outlaws circuit this year.

No special insight for this one. It’s Larson on dirt. He’s always a threat.

The No. 57 goes back-to-back in Oskaloosa! pic.twitter.com/ySEGSPu4Ic

The driver known as Hot Sauce scored a strong fourth-place finish in the Knoxville Nationals A-main last season, best among the regional ringers who made the trip to the capital of sprint car racing.

That’s relevant because thus far in 2022, regional ringers have made a lot of noise on the national level. Scelzi himself scored feature wins at Tulare Thunderbowl Raceway and Bakersfield Raceway (both in California) when the Outlaws made their westward swing earlier this year.

Meanwhile, the Pennsylvania Posse has seen Brent Marks spank the Outlaws both at their home track (Devil’s Bowl in Texas) and score two six-figure paydays in three days during the King’s Royal weekend earlier this summer.

Marks will be on every radar screen looking at Knoxville this week, but Scelzi gets the call here for flying under it. The No. 18 could be the sleeper pick of the Nationals.

For one, the 10-time Outlaws champion has only won the Knoxville Nationals 10 times. But Schatz’s last win in the Nationals came back in 2017.

What really mattered, though in watching Sunday’s race at Knoxville, was seeing how Schatz got stronger as the race went on. Schatz has publicly observed on more than one occasion this year that his No. 15 car has faded over the course of features more often than not.

Yet in the week leading up to the Nationals, Schatz came on strong at Knoxville, and the weekend prior scored his first Outlaws feature win since February at Weedsport Speedway.

There’s no debate that Sweet is facing a lot more competition for the Outlaws title this year as compared to last season. David Gravel, Carson Macedo and Sheldon Haudenschild have all taken turns threatening Sweet at the front of the field in 2022.

But this summer, Sweet’s found another gear. Rather than relying on points racing to stay out front, the defending series champion has scored two major wins in the last month, grabbing his first career Williams Grove Speedway (Pa.) win in the Summer Nationals, then taking the Ironman 55 feature at I-55 Raceway last Saturday out in Missouri.

That Ironman win was special given the circumstances; the night prior, Sweet had his purse snatched, literally, by Macedo in the final corner after leading for a good long while.

. @dirtvision REPLAY: OMG!!! What an INSANE finish to tonight's Feature from @i55!!!! @carson_macedo Steals the win in the final corner!!! pic.twitter.com/hLgTNMQjeg

Seeing the No. 49 team shake that type of loss off to steal a major win 24 hours later speaks volumes as to where they are right now. And while the Knoxville Nationals don’t count toward the season points crown, Sweet grabbing the crown jewel of the season is likely a momentum swing no driver in the Outlaw ranks will be able to counter down the stretch.

Not one mention of Brent Marks. Are you kidding me? He only swept at Eldora and won at Knoxville in June. I think maybe do a little more research and not write on emotiion.
I like Jacob Allen but highlight him and not Brent. Also what has Schatz done this year? Yes he is a legend at Knoxville, but his season performance has been very subpar. I am a Brent fan but I respect him more for what he does with what he has to work with. Yes he has the budget but he and his crew set the car up, and Brent runs the team heck he even drives the truck. There is no big name crew chief waiting for him when he brings the car in to the pits. He is the only big name driver without a big name crew chief. It is just Brent and Heath and Fud. And 20 podiums in the last 25 races. I think he surely deserved a mention.