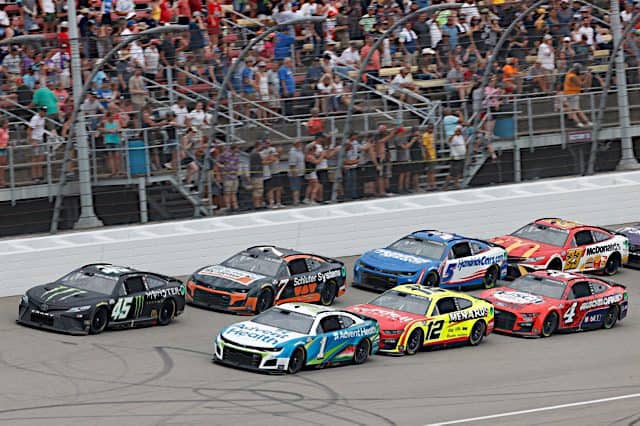 Michigan International Speedway was considered to be one of the key races in how the Next Gen car will be perceived on intermediate tracks in the NASCAR Cup Series. Naturally, if you’re not at the track, the TV broadcast is the primary way you’ll think about how the race went.

NBC Sports seemed to have taken that to heart prior to the race on Sunday, Aug. 7.

The FireKeepers Casino 400 brought Dale Earnhardt Jr. back to the play-by-play role for the second time in Cup this year. He fully admits he’s not the best play-by-play man out there but that he enjoys it to a point.

Rick Allen took Sunday off from the booth. However, Allen didn’t just fly home and spend the day with his family. He was still there at the track at the butt crack of dawn with the rest of the production staff and was willing to be a team player, as Earnhardt explained in a tweet.

after our morning meeting, Rick stopped me and simple said to take a rundown (a detailed sheet of paper) for the CDTG show “just in case” there was a weather issue and I was needed to cover in the booth.

Earnhardt clarified that he wasn’t supposed to have a role on Countdown to Green Sunday. He was going to just lay out and go over some notes in the booth until the race broadcast started at 3 p.m. ET. As you could tell, that didn’t exactly come to pass as it was pouring at the track three minutes into the pre-race show and Steve Letarte was down an umbrella.

As a result of the deluge, Earnhardt and Jeff Burton spent about 35-40 minutes anchoring from the booth. They talked about the various topics of the day in the Cup Series and related their own experiences in regards to either growing up in the sport or having kids growing up around the sport.

For someone who had effectively not prepared to work the pre-race show, Earnhardt did well despite not having significant prep time.

The pivot is just one more example that Allen has stated previously about the kind of atmosphere he wants on NBC Sports’ NASCAR broadcasts. In 2018, Allen told Frontstretch that he wants the booth commentators to be bound together as a group. That can mean anything from actually taking vacations together (which has happened) to helping each other out whenever one can.

Once the rains let up, viewers started getting more pre-race interviews as everyone came out from under cover.

Michigan apparently had its best attendance for a Cup race Sunday since 2016. It seemed like you could hear the crowd quite a bit. However, I’m not really sure if all of that sound was natural. And if not, it’s not a good look if you’re pumping in crowd noise for a Cup race.

Stat-wise, this year’s race had fewer lead changes (15) and fewer on-track passes in total than last year’s event with the high downforce package on the Gen-6 car. I don’t recall last year’s race being all that exciting for fans.

A quick check of last year’s critique shows there was a really narrow groove and the resin laid down at the time didn’t really do anything to promote better racing. It appears that the Next Gen car did promote better competition, but there was apparently less of it. A different production strategy paid off.

However, much of what I’ve read about the race on Twitter has been positive. It just goes to show that on television, how a race is presented is quite important in how fans perceive it. If they only see the front of the race and not much is happening there, they’re going to think the race was boring when it might not have been.

Sunday’s race was probably not the most inclusive broadcast I’ve seen over the past couple of years from NBC Sports. However, what we did see was quite competitive. There was a lot of action toward the front of the pack for much of the day. I would have liked to see a little more action further back, but NBC had the excuse of having decent action for the lead at the same time.

One of the more notable moments occurred after Christopher Bell crashed to bring out the final caution on lap 160. Replays appeared to show that Bell tried to clear himself in front of Ross Chastain, who had just pitted. Contact was made, resulting in Bell hitting the wall.

By all indications, Bell more or less took himself out. However, that wasn’t the biggest takeaway here; rather it was something Steve Letarte said, something akin to, “I’ll be the first person to call Chastain out” in regards to some of the issues that driver has had this year.

Now, it should be stated Letarte was not blaming Chastain for the crash (although I’m pretty sure that a lot people probably did just because Chastain was there).

But does Letarte have some kind of bias against him? I don’t think that’s the case. I think that’s one of those, “I call it when it see it” kind of things, not unlike Supreme Court justice Potter Stewart’s infamous concurrence opinion in the Jacobellis vs. Ohio case in 1964 on obscenity. I argue that it is the opposite of bias. Instead, it’s pure, unadulterated opinion.

In addition, it was definitely noticeable in this instance that Earnhardt was not reliant on monitors in his call of the race. You heard his voice increase in intensity when the crash happened in real time before viewers could see it on their screens.

Much like Allen, Earnhardt is a rather excitable man in the broadcast booth. You can just listen to his commentary and get a decent idea of how much he was enjoying the race. With that in mind, he seemed to enjoy Sunday’s event immensely.

While Earnhardt might not think he’s anything special as a play-by-play man, he is perfectly serviceable. It’s a man that has one of the largest race collections on DVD of nearly anybody. He can go and look at darn near anything whenever he wants. That said, Earnhardt shouldn’t be the full-time play-by-play man for NASCAR broadcasts — and I don’t think he would want the job, either.

Post-race coverage was relatively brief since the race started 70 minutes late and it was after 7 p.m. ET by that point. Viewers got interviews with the top-three finishers (Kevin Harvick, Bubba Wallace, Denny Hamlin), the winning crew chief (Rodney Childers) and a check of the points. There was also some post-race analysis before USA Network left Michigan.

That’s all for this week. Next weekend is a bit of a quieter time as the Cup Series and NASCAR Camping World Truck Series will be racing at Richmond Raceway.

In the world of dirt, it is quite different, as this week is the Knoxville Nationals, where $175,000 will be on the line to win the A-Main, a purse of $579,550 for the A-main and $702,270 for the night. That’s not counting the other nights of competition as everything gets underway Wednesday night.

TV listings can be found here.

We will provide critiques of the Cup and Truck series races from Richmond in next week’s edition of Couch Potato Tuesday here at Frontstretch. The Critic’s Annex in the Frontstretch Newsletter will cover Saturday’s New Holland 250.

I thought this was a pretty typical MIS race…chaos for 2 laps after a restart, then a lot of not much happening.

I don’t know about Latarte, but I think Burton definitely has some bias issues with Chastain, & as a supposed professional, any feelings like that should remain private. But he seems to go overboard to air his.

Seems like they all have a bias against Chastain.

Give Burton the boot and put Allen back in. As for the race these cars don’t seem to handle any better in dirty air than the previous cars. You have no idea who might actually be fast until they manage to get to the front and bam! Kevin Harvick wins.

Clean air was king. There is still a problem. But it is a work-in-process. AS for the broadcast, I listened to the radio. I would un-mute when I wanted to hear the banter.