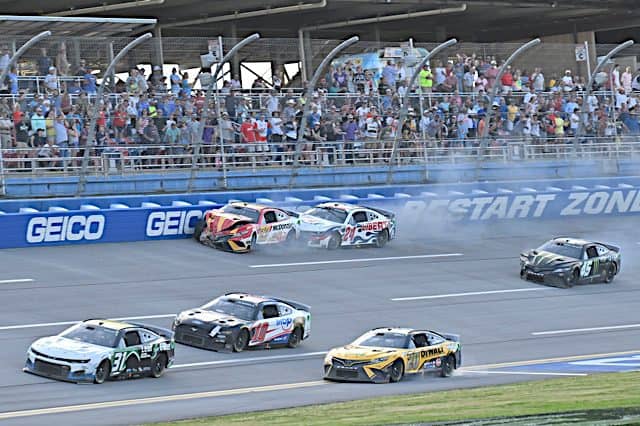 Did You Notice? … Early NASCAR Cup Series championship favorites for 2022 have crashed back down to earth? Just 10 races ago, at the halfway point of the regular season, the postseason field looked far different than it does right now.

There were only two drivers with multiple wins: William Byron and Ross Chastain. Byron could have easily had a third victory, losing out to Joey Logano after contact at Darlington Raceway, and was in solid position to challenge for the overall top seed. Chastain had been on a hot streak of his own, winning a second race of the year (Talladega Superspeedway) and posting six top-three finishes in the year’s first 13 events.

Fast forward to August and both drivers are still guaranteed to make the playoffs. But each one finds themselves facing a set of problems no one anticipated. Byron is the big mystery, going without a top-five finish the last 10 races while posting no result better than ninth. During that stretch, he’s led just 42 laps, 41 of them at Atlanta Motor Speedway — a pack race he wound up TKO’d in a wreck not of his making.

Byron was upbeat at Michigan International Speedway this past weekend, claiming the car had speed, only to become a victim of circumstances. But he also acknowledged the difficulty in being able to nail down a rhythm with a Next Gen chassis that’s still on its first year of competition.

“There’s really not a lot of consistency, as we’ve seen, with performances,” Byron said at MIS. “There’s not a lot to lean on, in terms of what to expect.”

With Chastain, expectations are precisely the problem for a No. 1 team that’s gotten in a few too many messes. An aggression that snuck up on everyone during the first half of the season has backfired spectacularly over the last three weeks. People now expect Chastain to make the mistake, or they expect to get revenge over past crimes against them.

Such highly-anticipated payback from Denny Hamlin happened two weeks ago at Pocono Raceway, ruining Chastain’s bid for the win. The next week, on the Indianapolis Motor Speedway road course, Chastain using the access road as a shortcut led to a 30-second penalty after the final restart in a failed bid to sneak ahead of winner Tyler Reddick.

Then, at MIS, Chastain got knocked out when trying to pass fellow contender Christopher Bell on fresh tires. But the story that will linger comes from Kyle Larson’s radio, where the reigning NASCAR champion laughed when asked if he’d be willing to work with Chastain, a fellow Chevrolet driver, in a bid to get to to the front.

“Ross doesn’t work together with anybody,” Larson said. “Funny.”

It’s created a downward spiral for Chastain, going three straight races without a top-10 finish for the first time all season. He’s posted just one additional top-three finish over the past 10 weeks, adding two playoff points during that stretch while Chase Elliott breezed by him with 18.

The gap between the two now stands at 11 with Elliott in position for more as the all-but-certain regular season points champion. For Chastain, the open question is now how many other drivers are willing to make his life difficult (at best) or outright turn him when the playoffs offer two easy opportunities to get even (the Southern 500 and the Bristol Night Race).

Behind Elliott at the halfway point sat veteran Kyle Busch, ranked fourth with a playoff-clinching win from the Bristol Dirt Race. Ever since, Busch has slowly unraveled, posting two additional runner-up finishes before eight consecutive races outside the top 10. His bid to remain in a Joe Gibbs Racing Toyota for 2023 has slowly crumbled, with the podcast Door, Bumper, Clear reporting the two sides are no longer talking.

If Busch does wind up moving on, it’s a massive distraction to his hopes to capture the title in 2022. We’ve only seen two drivers make the Championship 4 during the elimination-style playoffs (2014-21) when it was clear they wouldn’t be returning to the same team the following season.

In those cases, there were extenuating circumstances. Jeff Gordon (2015) had announced his retirement following the season, and Hendrick Motorsports rallied around that during the playoffs. Martin Truex Jr. (2018) was leaving Furniture Row Racing due to owner Barney Visser’s decision to close it; it allowed the team to remain on the same page as they were all transitioning to new jobs.

There’s no modern era champion who didn’t start the Daytona 500 with the same team the following year. Busch would be hard-pressed to break that precedent, especially when fighting up to three top-tier championship contenders within Joe Gibbs Racing itself.

Behind Busch at halfway, sitting in fifth and sixth in playoff position, were Joey Logano and Alex Bowman. Logano, to parrot Byron’s quote about inconsistency with the Next Gen, won a second race at World Wide Technology Raceway in June to score more playoff points. But he went seven races without a top-five finish after that, only emerging this weekend to take a fourth at MIS.

Team Penske is currently a bit distracted, Ryan Blaney on the bubble as the lone winless playoff driver with Truex just 19 points behind him. Logano may actually be the best positioned of those I’m listing here due to his past playoff experience and Darlington success; remember, the Southern 500 serves as the first race in this year’s Round of 16.

Bowman, meanwhile, is in freefall. The No. 48 team has reverted to Jimmie Johnson 2018-2019 status,  posting more DNFs the last 10 races (four) than laps led (zero). Like Byron, Bowman has also gone without a top-five finish during this stretch, his best result a ninth at MIS.

That leaves Bowman with the fewest playoff points of anyone in the current field besides Blaney and Kevin Harvick. Being a lower seed hasn’t stopped Bowman from advancing out of the Round of 16 before (2018-21) but, in a crowded field, 2022 could prove far more difficult.

As these drivers have fallen off, we’ve seen new ones step up: Reddick, Denny Hamlin, even a Daniel Suarez. Add in Harvick’s win at MIS, and it’s easy to see why, behind Elliott, the championship race is more muddled than ever before.

Since Jade Buford was replaced earlier this year, we’ve already seen the No. 48 team win with another driver (Reddick at Texas Motor Speedway). So the equipment is good. Can Andretti make the transition?

“With the DBC news on the Busch-JGR situation,”

Sorry, what is DBC?

I also heard Almirola is coming back next year, not retiring, so the #10 seat is not up for grabs. Where is Busch going to go?

Also wondering what DBC is. Still thought Aric was stepping back next year, Ryan Preece was the top candidate. I think Busch would just be a disruption.

Funny, I thought the biggest downward spiral would have been Larson. He gets knocked out at Daytona, comes back & wins California. So far so good, but after that it’s all been mostly downhill.

Last season he was riding the hot hand, which got hotter during the playoffs.

This season he’s looking to back into the playoffs with a single win, & that way back to the second race of the season.

The way he’s been running he’ll have to hustle to transfer out of the first round.
What difference a year & a new car make.

I’d love to see Kyle Busch running for HMS, but it would have to be a satellite team. Busch and his crew chief just aren’t clicking. With a Hendrick car and the right crew chief I can easily see him winning a lot. Can Rick and Jeff get the sponsors for Kyle, I bet they can easily.

Baby Busch drove for Mr. H and they got rid of him because his attitude fits in better with Reverend Joe.

And I bet Rick and Jeff have had, and are having talks about it and looking at different scenarios. If Harvick s come around every so often, Kyle Busch’s come available very seldom and the reverand is going with his grandson I bet.