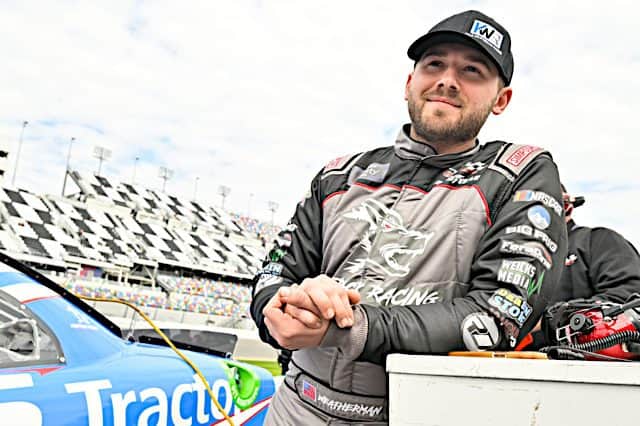 It’s approaching the first anniversary of the announcement of Jesse Iwuji Motorsports — a team owned by NASCAR Xfinity Series driver Jesse Iwuji and NFL Hall of Famer Emmitt Smith, among others.

Iwuji himself was set to be the driver for the 2022 season, and to start things off, he qualified his car 30th in a field of 47 cars going for 38 spots at Daytona International Speedway. Not a horrible start, as half the battle is just making the race. Just ask Jordan Anderson what not being able to qualify did to his team’s 2021 season efforts.

The team struggled in the first six races of the season. Not super surprising. A team can rarely enter a top-level racing series, let alone NASCAR, and succeed in their first season. The best, most recent example of that success in the Xfinity Series would be Kaulig Racing, who, in their debut season in 2016 with Blake Koch, reached the Xfinity Series playoffs and the Round of 8.

But not every new team can be Kaulig.

In the first six races of 2022, the team failed to qualify twice — once with Jesse Little at Phoenix Raceway and then with Iwuji at Circuit of the Americas. Iwuji was behind the wheel in the team’s four starts and failed to crack into the top 25 in all four races. He had pair of 27th-place finishes at Daytona and Atlanta Motor Speedway, accompanied by 36th at Auto Club Speedway and 34th at Las Vegas Motor Speedway.

Iwuji struggled, and his racing experience’s shortcomings undoubtedly helped influence the decision to bring Kyle Weatherman in to drive the No. 34 Chevrolet at Richmond Raceway in the spring. The decision was announced the Thursday before Richmond, late in the evening. That decision to bring Weatherman to Jesse Iwuji Motorsports, however it came about or what factors contributed to it, has turned out to be an excellent decision for the team.

I’m not here to shine additional lights on the debate if Iwuji should be approved to race or not, because while that is a conversation worth having, it’s not the entire crux of this week’s column. Let’s compare performances.

The average start for the car is 26.67 in the 18 instances it made the race. Iwuji’s average starting position is 30.75, with his best start being 17th at Texas — one of two races he started inside the top 25. But those stats are skewed because Weatherman qualified the car in both of those top-25 starts as Iwuji had military obligations. Of course because of the driver change, the No. 34 had to start at the rear.

Weatherman has fared much better in qualifying. His average starting spot is 21.3 not including the times he qualified the car for Iwuji. This past weekend at Michigan International Speedway, Weatherman qualified eighth, a team best. He has qualified inside the top 25 in seven races and has only one start of 30th or worse, compared to Iwuji’s five.

When it comes to final results, Weatherman has the better statistics as well, posting an average finish of 23.0. In his second start with the team, he scored their first top-20 finish (16th) at Martinsville Speedway. Two races later at Darlington Raceway, he scored a 12th-place finish. The following two months were a little rough, but Weatherman rebounded with an eighth-place showing at New Hampshire Motor Speedway for the team’s best finish. He has since followed it up with two more top 20s in the three most recent races.

Iwuji is averaging a 29.75 finish, putting the team’s average finish in 18 starts at 26.0. He has failed to finish inside the top 20 and has a best finish of 22nd at Road America. Four of Iwuji’s finishes are outside the top 30. But, to give Iwuji a bit of credit, two of those four finishes came in the season’s first four races, showing the team has gotten better.

In the tweet announcing that Weatherman would take over driving duties at Richmond, the team statement opened with, “Being a driver and owner comes with an option each weekend to be either a driver or owner.”

Weatherman began the season with DGM Racing’s No. 92 team, competing in the opening five races of the season before DGM Racing shut down that particular entry and consolidated to two full-time rides. There were likely hopes of additional races, but DGM’s loss has been Iwuji’s team’s gain.

Weatherman and the No. 34 team enter the final Xfinity Series off-weekend on the best streak of the team’s young existence. That may not be saying much, but it indeed points to the fact the team is heading in the right direction.

A 10th-place finish at New Hampshire turned into the eighth-place finish following Landon Cassill‘s and Noah Gragson’s cars being disqualified. At Pocono Raceway the following weekend, Weatherman brought the car home in 19th. It was a mid-field finish, but still a top 20 — a far cry from where the team was just a few months ago.

Road courses are a bit of a mystery for Weatherman. Three of his six best tracks, but also two of his worst six tracks, are road courses. So maybe the 30th-place finish at the Indianapolis Motor Speedway road course wasn’t that big of a shocker, but Weatherman rebounded to qualify eighth at Michigan and finished 16th, which is where he ran most of the day.

The same press release announcing Weatherman’s drive at Richmond stated that Jesse Iwuji Motorsports “plans to be in motorsports for a very long time.” Keeping Weatherman in the car for the remaining 12 races of the season is crucial to long-term success. He’s a classically trained racer, whereas Iwuji only began to learn how to drive competitively later in life.

That’s not to say that a person can’t learn to drive in their mid-20s. That’s how it used to be before kids started racing regularly at five years old.

For now, Iwuji should keep his owner hat on and work to improve his race craft in other racing disciplines, keeping the driver’s hat on top of Weatherman’s head. The long-term sustainability of Jesse Iwuji Motorsports is brighter now than it was three months ago. That is due to the contributions that Weatherman has made inside the car, and the marginal gains made each week are starting to show up more often.

Weatherman is a wheelman. Look at the 47 car this year. Race after race, missing the show. Yet Weatherman almost always got it in the show. He can take just about any ride and make it fast. I dont think Iwuji has what it takes to make it in NASCAR as a driver, but might be better suited as an owner.

Iwuji is a great guy but he’d be better in a tie and slacks than a firesuit. If he wants to further his racing career, run a couple years in ARCA and then try trucks and Xfinity again.