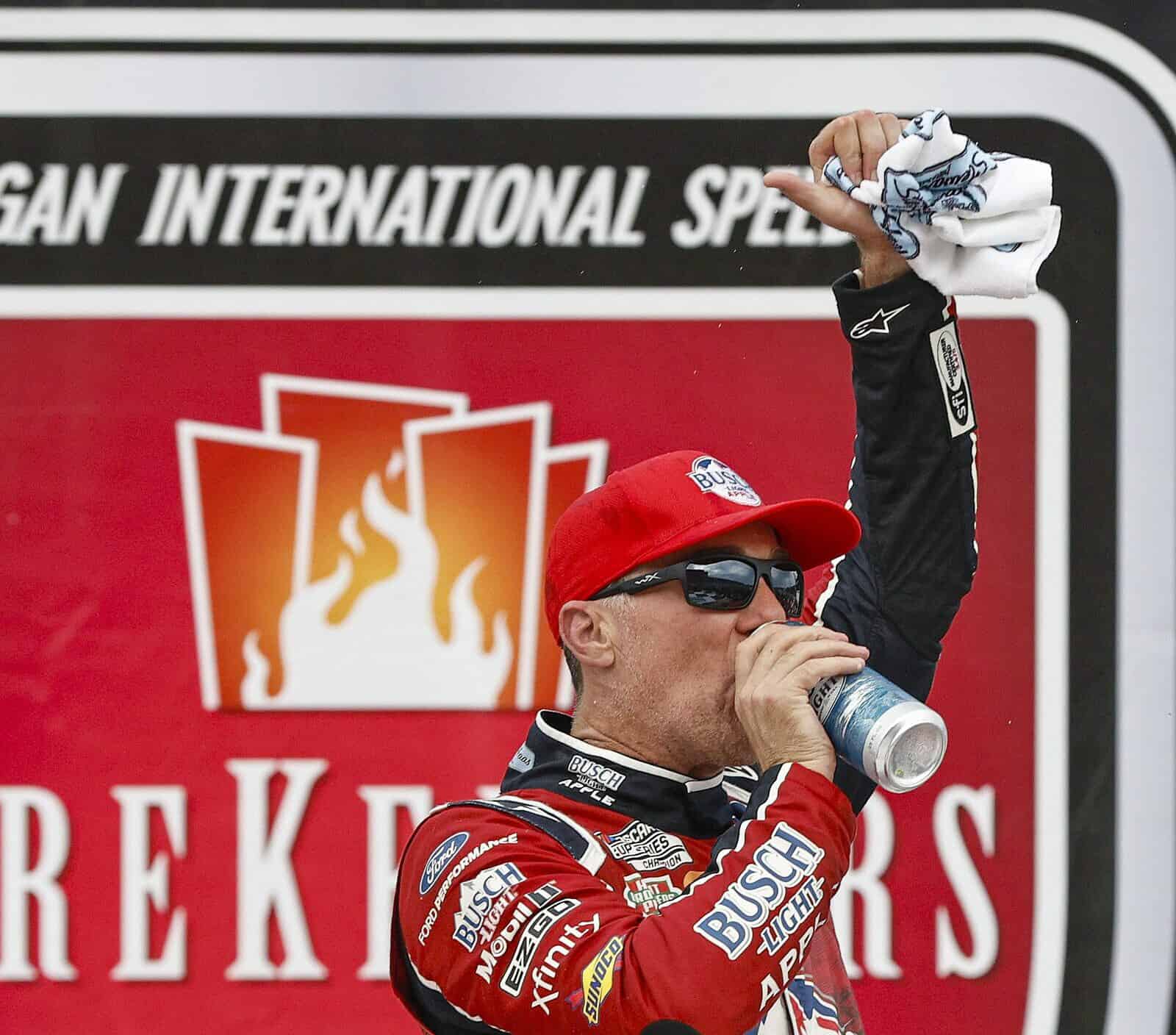 Been there, done that and then some.

Below the playoff cut line with four races left in the regular season?

Oh no, the horror.

This more or less summed up what Kevin Harvick faced heading into Sunday’s (Aug. 7) NASCAR Cup Series race at Michigan International Speedway and Harvick’s outward attitude toward it after he won said race.

“This is all easy to deal with,” Harvick said in the MIS media center after earning his 59th career Cup victory. “It’s really not that hard. You compartmentalize this, and you set it aside.”

This could come off as a somewhat glib response.

However, Harvick went on to remind those sitting in the media center how some of us were introduced to him 21 years ago in February 2001.

“There’s really no match for jumping in a racecar and taking over for Dale Earnhardt,” Harvick said.

Harvick was a 25-year-old NASCAR Busch Series (now Xfinity Series) driver for Richard Childress when he was called upon to succeed Earnhardt after the seven-time Cup champion was killed on the last lap of the 2001 Daytona 500.

A week later, Harvick made his Cup debut at Rockingham Speedway. Instead of a black No. 3 car, Harvick piloted a white No. 29 Chevrolet.

He spent the rest of the year racing double duty in both Cup and Busch as he navigated the confusing period of being the guy who replaced NASCAR’s most recognized driver.

“There’s nothing like that was for the first six or eight weeks,” Harvick recalled. “You just can’t match it. Never will. Never come close. There’s nothing even close.

“As you get older, too, but I think that part comes with life in general. …

“Those moments you just can’t match. I think that everything after that is — that was the training ground. That was the start of the process.”

Even then, almost two years without a Cup Series win for someone like Harvick is nothing to ignore, even if he’s had a longer losing streak (115 races, snapped in 2010).

Especially when you’re 46 years old, in the first year with the Next Gen car and your winless streak came after you won nine races in 2020.

But Harvick pointedly declared Sunday that anyone who doubted his team didn’t know them.

“[The win] means a lot,” Harvick said. “As we went through the first part of the season and really not having everything where we wanted to be, and we really just kept our heads down and just kept communicating and working and working through what we thought our weak points were.

“And really, over the last five or six weeks, the cars have run a lot better, and a lot of that goes to just [crew chief] Rodney [Childers] and … everybody just kind of just thinking about what we need to do different and trying things. And, really, it’s gone smoothly over the last several weeks in the simulator, at the racetrack and the way that things have raced.”

Childers has been Harvick’s crew chief since Harvick joined Stewart-Haas Racing in 2014. He said going through their winless streak after the success of 2020 was “definitely a mental struggle” for the No. 4 team.

“It just comes down to the people that are around you and what certain people say every day and the way our team meetings go in the mornings and just that dedication,” Childers said.

Childers observed he hadn’t realized the winless streak had been more than 60 races until he was told during post-race.

“Nobody really ever changed a lick,” Childers said. “Every single morning we act the same. We talk about the same things of what we need to do better and when we need to do it. …

“We try to be perfect, and we try to win, but when we don’t win, we don’t have flames coming out of offices and people going crazy. … We’ve just kind of gradually got better, and honestly, that’s been fun just learning this car. I’ll admit I was probably the hard-headed one all year. Just every week you talk about, well, this is what we do with the old car, this is what we won with the old car. None of that matters anymore.”

Now, any talk about winless streaks and missing the playoffs doesn’t matter either.

Before they get to the playoffs, the series has three races to get through, starting with Richmond Raceway this weekend. The short track is just the second track the Cup Series will make a return trip to this season.

Harvick and Co. should feel good about their chances. In the spring race, Harvick used a long green-flag run to end the race to finish second to Denny Hamlin.

“I’m really happy that we’re going back to a lot of these racetracks that I can actually open up a notebook and not fire off out of the pits and say, ‘Well, I wonder how far I should drive it in today? I wonder if it’s going to hit the limit or be tight or loose?'” Harvick said.

“At least going back, the thought processes will be way different for us as far as setups and things like that.”

While that may be different, Harvick said the team won’t change anything else about its preparation after ending its winless drought.

“I’m going to debrief on Tuesday and write my notes down, and they’re going to send me 27 emails of what the characteristics of the racetrack are and all the different setup things and everything that they send me every week,” Harvick said. “It’s going to be just the same routine. We’re just going to grind through the same things again next week, and it will be no different than the last 65 weeks that we’ve lost.

“That’s the great part about having an experienced team and being around people for a long time and being able to have that trust in people. […] Everybody knows this is the expectation. Nobody is working towards anything different.”