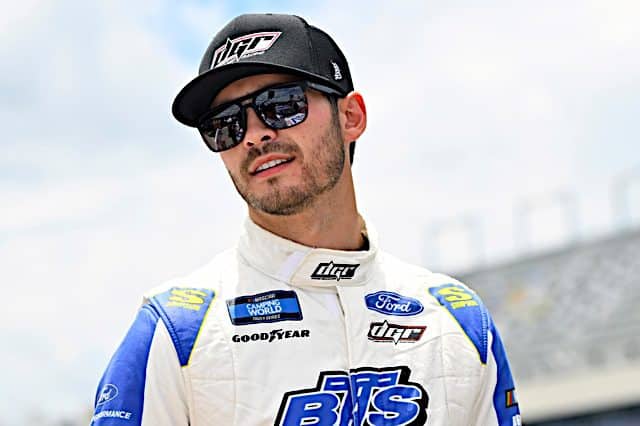 Every driver dreams of making it to and succeeding at the pinnacles of motorsports, and everyone has a unique path in rising through the ranks. But few drivers can say that they’ve had a path as adventurous as Tanner Gray.

However, despite his early success on the dragstrip, Gray had always set his sights on competing in stock cars.

“I get that question [about the switch] a lot, obviously, but I just always enjoyed circle track racing,” Gray told Frontstretch. “In drag racing, the only thing I ever drag raced was the Pro Stock car, aside from the junior dragster when I was young. But besides that, I was in a 600-cc micro sprint, go-karts and everything else.

“So I had done a lot of circle track racing, mainly on dirt. But I just really enjoyed this form of racing more than I did the drag racing. So when I had the opportunity to come back over this way, that’s kind of what I wanted to do. I knew that if I wanted to make a career out of driving, this was probably the direction I needed to go.

“I enjoy all [forms of racing]. I still dirt race as much as I can, and I really love that. And then obviously getting to road course race just in the Truck Series. I enjoy it. I’m not that good at it, but I enjoy it. So, this is something I’ve been working on getting better at.”

Gray made the switch to stock cars in 2019, competing full time in the then-K&N Pro Series East, which has since been reorganized into the ARCA Menards Series East. In his inaugural season, he won a race at South Boston Speedway and finished third in points. He also made three Truck Series starts in 2019 before moving to the series full time in 2020.

Since joining the Truck Series, Gray has scored seven top-five finishes and 15 top 10s in 65 career starts, with a best finish of third on four different occasions. His best points finish was 14th in his 2020 rookie season, although he also sits 14th in points with six races remaining in the 2022 season.

As with most drivers, Gray’s favorite memories in his time in the Truck Series have been his greatest performances.

“Anytime we run well,” Gray said. “One of my favorites that I ran was 2020 in the Bristol Night Race where we ran third. I remember that was a really fun race for me.”

Gray was off to a red-hot start in 2022 after a relatively disappointing 2021 saw him finish in the top 10 just twice. Gray eclipsed that mark in just the first three races of 2022, as he opened the season with finishes of fourth, fifth and eighth at Daytona International Speedway, Las Vegas Motor Speedway and Atlanta Motor Speedway, respectively. After the first three races, he sat second in series points.

However, Gray and the No. 15 team went on a cold streak after their hot start, as Gray has recorded just two top 10s in the 14 races since.

“Near the beginning of the year, I felt really confident about everything,” Gray said. “And then, as the year went, we just didn’t really execute or finish off these races that we should have. [Missing the playoffs] is kind of a tough pill to swallow, but overall, I think we just got to work on getting back to where we were to start the year and execute, finish things off and be there at the end.”

With the playoff heartbreak, Gray remains set on improving his performance in the Truck Series before he entertains the thought of making the move to the Xfinity Series and beyond.

“I mean, it all depends on progression and stuff like that,” Gray said. “I feel like I need to run better in the Truck Series before I take the next step to move up. And that’s kind of what we’re committed to doing right now. So we just got to figure out how we can maximize our days every year and run better. And then hopefully those other opportunities and whatnot come along.

“I feel like there’s been times that we’ve showed a lot of speed. Like we’re close to be able to win more, and then there’s times where we haven’t been in the ballgame.”

Since 2021, Gray’s tenure in the Truck Series has been a family affair. Gray, now 23, has since become teammates with his 17-year-old brother Taylor Gray for the races the latter is old enough to run.

Gray described the sibling rivalry as competitive, but friendly.

“I think we definitely want to beat each other,” Gray said. “But we still help each other out, bounce ideas off each other and whatnot. But it’s being able to have him in the shop. We watch film and stuff together, and I’ve enjoyed it. He may have a different outlook in this case.”

There are six races left in the 2022 season, and all signs indicate Gray being back for 2023. There is still time for Gray to recapture the speed he had at the beginning of the year and end the season with positive momentum, as he continues to set his sights on scoring an elusive first career win in the Truck Series.