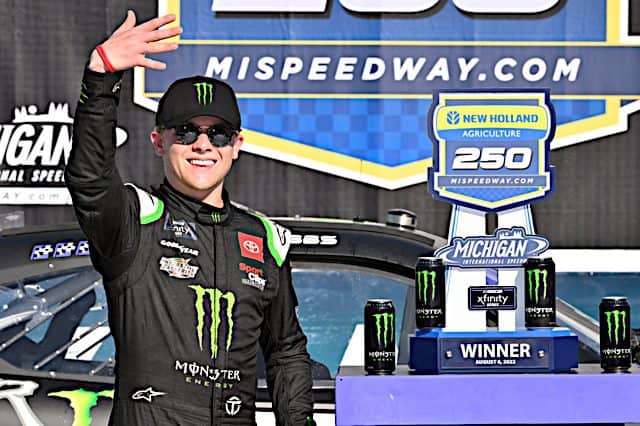 Ty Gibbs has rocketed up the NASCAR ladder.

Gibbs was just getting started with his accomplishments. He won his NASCAR Xfinity Series debut in 2021, then followed it up with three more wins.

This year, Gibbs has competed in Xfinity full-time, amassing a series-high five victories and a top bet to win the Xfinity championship.

When Kurt Busch was forced to temporarily step out of the No. 45 23XI Racing Toyota due to issues related to a concussion sustained in the NASCAR Cup Series action, Gibbs was tabbed to fill in. Astoundingly, Gibbs has quickly learned the Next Gen car. On Sunday (Aug. 7), Gibbs achieved his first-ever Cup top 10 with a 10th-place finish at Michigan International Speedway.

Gibbs has not dwelled on his successes for long though. Rather, he wants to keep winning races and succeeding as a NASCAR driver.

“I feel like that’s so hard for me to sit back and just dwell in the presence of all this that’s happened in the past couple of months or years,” Gibbs said after he won the Xfinity race at MIS. “It’s been so crazy, so I just acknowledge it and keep working harder and harder. And I feel like that pays off. You can’t rest, you always got to keep working, you can’t stop when the job’s not finished so just got to keep going and going.”

Gibbs’ meteoric rise has not surprised those in ARCA, who immediately knew he was talented.

“Right from the start, Ty showed he was going to be an elite talent,” ARCA Communications Manager Charlie Krall told Frontstretch. “They came and tested with him when he was 14 or 15 years old. He was testing those race cars. They would rent out Toledo Speedway for the day. Even then, he was already incredibly focused, and you could tell he was already on track to become a very successful racecar driver with the attitude he was showing. I am not at all surprised that he’s climbed the ladder as quickly as he has.”

Furthermore, Krall knows Gibbs’ constant determination is to thrive as a racecar driver, basking in the glory of a win during the race weekend before turning his attention to the next event.

“I have not seen his attitude change at all. He’s always been just that – I want to come out and race. He will do all the other stuff that race car drivers have to do – appearances, autograph sessions, all those things – and he’s great at it. He just wants to be a race car driver. He lets it be known and that’s where all his energy and focus go into. It is hard to argue with that philosophy because the results speak for themselves. He has been immensely successful at a very young age. While I have seen him change from a 14-year-old to a 19-year-old, just like anybody else, his attitude has not changed. He just wants to race.”

Gibbs’ success adds another name to the pantheon of ARCA winners excelling in NASCAR, such as NASCAR Camping World Truck Series playoff drivers Christian Eckes, Grant Enfinger and Chandler Smith, among others.

“We build champions,” Krall said. “This is exactly what ARCA is here to do. We are here to provide a training ground for these young drivers to gain experience at many Cup-level racetracks in very similar race cars. It absolutely is what our platform is for. We are the first step that you are going to take to become a professional race car driver. It should be no surprise that Ty Gibbs has launched from a successful ARCA career into a very successful Xfinity career and eventually he will be a successful Cup Series race car driver. There’s no doubt about it.”

Gibbs is only 20 years old. His 18 victories in the main ARCA series are fourth-most in series history, despite only competing in 47 races. Comparatively, ARCA all-time winner Frank Kimmel amassed 80 wins and 10 titles over 503 races.

Although Krall would love to see Gibbs continue competing in ARCA, he knows Gibbs’ time in ARCA is over. In Gibbs’ defense, he checked off his goals in ARCA: gain experience, win races and win a championship.

“While we all wish we had more times with all our successful drivers, we all know that’s exactly what they were all here to do,” Krall acknowledged. “They were here to get some experience, have some success at this level and then move on to bigger and better things. We are excited for them and proud of them that they were able to make that happen.”

Krall praised not only Gibbs but a multitude of successful ARCA drivers racing in NASCAR. Fortunately for ARCA, there are more talented youngsters racing in the series, such as Rajah Caruth, Nick Sanchez, Sammy Smith, and several others.

“That’s why we started racing at Talladega, Pocono, etc. so drivers could add a win at a NASCAR track to their resume. That’s what this platform has been for right from the get-go a chance to give drivers experience at some of the premier racetracks in the country to very similar cars raced in NASCAR.”

Now the ARCA points leader, Sanchez signed a four-race deal with Xfinity team Big Machine Racing. He does not have anything set in stone for next year, but his Xfinity performance this year clearly is an audition.

“[For] 2023 I’ve had talks with many people,” Sanchez told Frontstretch. “I know at some point there will probably be something with Rev Racing that I do in 2023. As far as looking at other cars, other series I can get in, whether it be the NASCAR Camping World Truck Series or NASCAR Xfinity Series or ARCA, that’s all open. Obviously, with Chevrolet, that’s the key there but obviously, those four races with Big Machine Racing will set the tone for my 2023 Xfinity Series schedule if I have any of them.

“My goal is to build with this team [Rev] as they progress, so I do not think that changes. Chevrolet’s helped me knock on a lot of doors and open some of them. So those talks will continue with them on how I can progress in the sport.”

ARCA has developed massive amounts of NASCAR talent, as Krall quipped, “We have a pretty important role in the development of NASCAR stars of tomorrow. Absolutely we build champions at this level. They have all been here. It is a very important step.”

Gibbs even has shocked himself with his enormous ascension through the NASCAR ranks. He does not want to think too much about it; rather, he prepares for his next event.