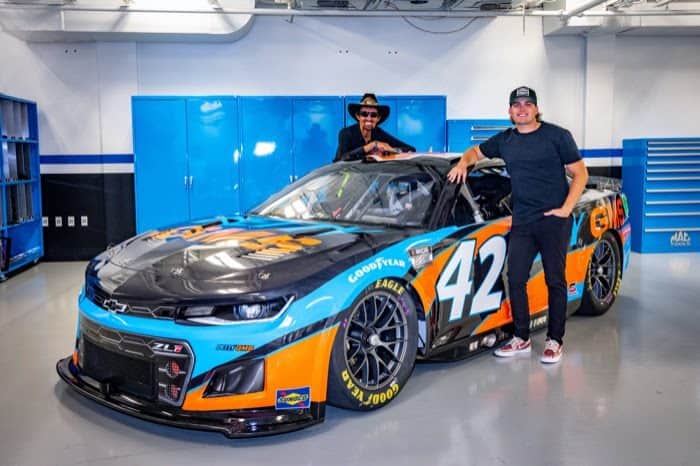 Noah Gragson has quickly become one of NASCAR’s most polarizing figures. No matter how you feel about the youngster from Las Vegas, Nevada, one thing is for sure, he certainly has some talent.

It was that talent that made Petty GMS Motorsports decide that he should be part of their organization. On Wednesday (Aug. 10), the organization announced the 24-year-old will drive its No. 42 entry full-time in 2023. Gragson will take the place of Ty Dillon, who will not return to the team after 2022.

Dillon currently sits 30th in the NASCAR Cup Series point standings and is a long shot at making the playoffs. Will Gragson be able to carry that team to the playoffs in 2023? Clayton Caldwell and Anthony Damcott discuss whether or not the hire of Gragson will push the No. 42 to the next level.

The announcement of Noah Gragson driving the No. 42 for Petty GMS Motorsports is not a surprise in the slightest. But now that he’s been announced, everybody is beginning to set expectations for how he will do in 2023.

But I believe that people need to pump the brakes on any expectation of him making the playoffs next year. 2023 will be Gragson’s first full-time Cup season. Sure, he’s running a part-time schedule this year for Beard Motorsports and Kaulig Racing, but part-time is a different ballgame than full-time, especially when you currently run full-time on Saturdays.

Petty GMS is pretty set on keeping Gragson long-term as a teammate to Erik Jones. In terms of young driver rosters, Petty GMS has got a pretty good lineup. And it’s for this reason that 2023 should be Gragson’s warm-up year, per se. He has an entire Cup career ahead of him, so the fact that people are already talking about him making the playoffs in his first season is jumping the gun a little bit.

Erik Jones has come close this season and last, but right now they are not a playoff team but even he with all his experience couldn’t make the playoffs yet. I don’t expect Gragson to come in and suddenly change that especially if there’s no change to the equipment he will be running in. In that case, I don’t really see him doing much better than Dillon has done this season, and releasing Dillon would be pretty much pointless unless something happened behind the scenes that we don’t know about.

Instead, Petty GMS should be taking the Ty Gibbs/23XI Racing approach. Set realistic goals such as complete all the laps, drive smart, don’t wreck the race car, and once Gragson gets a lot more comfortable in the car, then maybe the goals can become bigger, such as leading laps, winning a stage and playing pit strategy right to win the race.

If Gragson gets handed too high of expectations in just his first season, and doesn’t deliver on those expectations, fans will be calling for him to be released from the ride or say that he needs to go to a “top-tier team” to pursue a real championship opportunity. While I’m sure this kind of criticism does not, and more than likely will not, bother Gragson, it is still not fair to hold him to those expectations in his first full-time season.

Petty GMS Motorsports is still a new team who will only be in their second season when Gragson joins them. They’re a mid-pack at best right now. They will not be contending for wins regularly next season with neither Gragson nor Jones. The best course of action is to give Gragson time to adjust to his new team, new car, new series, etc., before raising the bar substantially higher for him. -Anthony Damcott

No matter how you feel about Noah Gragson, one thing is for sure. The kid can drive. I know, he can be rough around the edges, and he goes over the line way too often. I understand how some people can’t tolerate him, but he has been arguably the best driver in the NASCAR Xfinity Series the last two or three seasons. That’s something not a lot of drivers can say. There is no question, he is ready for the next level.

It’s why Gragson will make the playoffs, because he’s got the ability and Petty GMS is getting a better driver behind the wheel in 2023 than they had in 2022. Dillon hasn’t nearly had the success Gragson has had in the Xfinity Series and his Cup Series career so far has left a lot to be desired. He is currently 30th in the NASCAR Cup Series point standings and has just one top-10 finish. Dillon’s teammate, Jones, has had a far better season, sitting 14th in the standings with eight top-10 finishes including two top fives. Petty GMS may be a mid-pack team, but the No. 42 car hasn’t even been that this year.

I believe the gap between the No. 43 and No. 42 cars will close significantly in 2023. Since 2020, Gragson has won eight NASCAR Xfinity Series races and finished fifth and third the last two years in points. He currently sits fourth in points this season with a legitimate shot at winning the championship in what will now be his final year at JR Motorsports.

You can’t have a better three seasons than Gragson’s had. He’s shown speed and consistency. No doubt he’s ruffled some feathers, but on track Gragson has really grown and shown he has what it takes to run for the championship.

I also believe Gragson will be in a better situation than Dillon was this year. Some of the troubles that have arose on the No. 42 car this season are out of Dillon’s hands. There’s no question about that. Any team in their first season of existence will have some growing pains. Fortunately for Gragson those growing pains won’t be nearly as severe in year two as they were in year one. That will give him a better chance at some more consistent finishes and will help in his chances to make the playoffs.

Another thing I like about Gragson is his aggressiveness. Aggressiveness is key in NASCAR nowadays. One of the most consistent and best drivers in the Cup Series this season has been Ross Chastain. Much like Gragson in the Xfinity Series, Chastain has not made too many friends thanks to his aggressive on-track nature. While some may argue he is too aggressive, it has worked for Chastain who has won two races and currently sits third in points. It is far and away his best year in the Cup Series.

With how tight the competition is thanks to the new car, being an aggressive driver is important. Chastain said this in an interview with NBC just this past weekend at Michigan. While some drivers are hesitant to make a pass if it’s risky, Chastain goes ahead and makes the move. It may not be the most popular thing and may anger some drivers but ask anyone who makes the most passes during a race? The answer is Chastain. If being aggressive is an asset in the Cup Series nowadays, well Gragson certainly has that area covered. I believe that will benefit him greatly in 2023.

In the end, I think Gragson’s aggressiveness, his talent and his team’s improvement will lead to a playoff berth for Gragson in 2023. – Clayton Caldwell

i feel there’s a lot that noah has to do to be in championship chase next year. he has to harness that aggressiveness, as if it’s shown too often in cup, he’ll end up on receiving end of the payback. noah has to realize he will no longer be in jrmotorsports equipment which is backed by hendrick. maybe noah will surprise all the doubters and fit in and learn what he can from petty and other older drivers. he’s just got to remember if he’s running against ty gibbs, or even chastian, in cup, don’t drive with his emotions, drive with his brain.

The fact that you’re even asking that question about a driver who hasn’t ever turned a lap in Cup as a fulltime driver, about next season. Highlights everything I dislike about this format.
From Daytona, everything is focused on the playoffs.

If by chance, a non playoff driver wins during the playoffs. He didn’t win, he “stole a win,” that’s total BS, but I’ll guarantee that will be the headline.

Hahaha what the hell are you smoking, he won’t ever contend for a win much less a championship, you are funny

Noah will not only win a race next year, not only will he make the playoffs next year, but he will make it to the “Final 4” next year. Put money on it. Y’eard it here first! lol

Wins for Petty are far and few between. So he should be able to turn Petty, a team that backs into a win once in a blue moon, into a championship contender as soon as he gets behind the wheel? Maybe you should talk to Keselowski and see what he thinks.