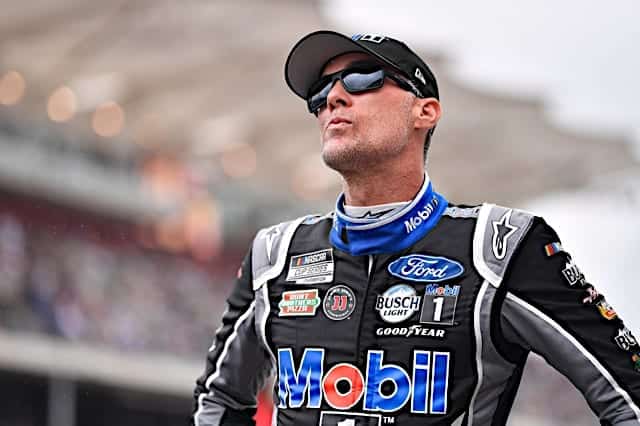 There have been drivers throughout NASCAR’s history who have been dominant for a period of time, some to the point of defining the time when they raced.

When The King was winning seven titles, unprecedented at the time, it was the Richard Petty Era. Then came the Dale Earnhardt Era, the Jeff Gordon Era, the Jimmie Johnson Era, the Kevin Harvick Era … or not.

Yeah, let’s talk about Harvick for a second.

For some reason, when talk turns to the dominant drivers over the last 20 years or so, Harvick somehow slips through the cracks. That’s largely thanks to Johnson, who came into the NASCAR Cup Series a year after Harvick and proceeded to win 83 races and seven titles. Killjoy.

If it’s not Johnson, it’s Kyle Busch, NASCAR’s current active win leader by just one over Harvick, whose victory Sunday (Aug. 7) at Michigan International Speedway was the 59th of his career.

The truth is, Harvick’s one of many through the years who have raced in the shadow of the greatest the sport has ever produced. Some drivers belong on that very same list, including Harvick; they just happened to race at the same time as Petty or Pearson or Earnhardt or Gordon or Johnson. Harvick is the most recent addition to that list, a quiet lock for first-ballot Hall of Fame entry when he does decide to hang up his helmet for good.

Harvick won’t catch Johnson on the wins list. In the long run, Busch will wind up with a few more than Harvick as well simply because he has more years left.

But a look at Harvick in relation to his peers (and the best of all time) is telling. Let’s start with those 59 wins. Only nine drivers have more, and Harvick was racing against three of them for much of his career. In the entire existence of NASCAR, only 14 drivers have equaled or topped 50 wins.

Harvick only has one title, but don’t read too much into that for a couple of reasons. One, while Richard Childress Racing is a very strong organization, during Harvick’s tenure the team was overshadowed by bigger, richer teams like Hendrick Motorsports, Joe Gibbs Racing and Roush Racing (now RFK Racing).

That Harvick won as many races as he did in those years speaks volumes.

The current playoff system also plays a role. Harvick was far and away the best driver in the Cup Series in 2020 and was stymied by the system — a system that some claim was to stop Johnson from winning titles left and right (it wasn’t, not any more than the original format was to stop Matt Kenseth’s reign of terror in 2003). But anyway, today’s drivers are better served with lending much greater weight to their other accomplishments.

And Harvick’s are more than enough.

Rushed to Cup a year before he was really ready, Harvick’s talent wasn’t yet matched by maturity, and he drew ire at many turns, either accused of trying to be Dale Earnhardt, the driver he’d had the monumental task of replacing at RCR after Earnhardt’s untimely death, or of not being good enough to carry Earnhardt’s steering wheel, depending on the day. Sometimes both in the same day.

Car number or not, everyone knew that was Earnhardt’s car when Harvick won his first career race at Atlanta Motor Speedway in 2001, beating the eventual season champion Gordon in the process. It was an emotional day for many, and certainly put Harvick’s name on the map.

Harvick’s early career is littered with conflict and confrontation with other drivers, though he mellowed over the years. He won the Xfinity Series title running double duty in 2001, and again in 2006, before NASCAR put a stop to Cup driver running for titles in other series.

A closer look at Harvick’s statistics shows exactly why he’s become one of the best of not only his era, but of all time.

He’s the active win leader (or tied for the lead) at seven tracks and second in active wins at five more. There are just three tracks where he’s raced more than twice where he has not won.

Harvick’s Cup career by the numbers:

Not many drivers can boast of the accomplishments that Harvick has in his career. While some of them escaped fans because he was always running in someone’s shadow, he’s cemented himself a place not just among the best of his time, but among the best ever to race in NASCAR’s top series.

65 race drought and “The Closer” is still used? How untrue in this day and age and very unoriginal.