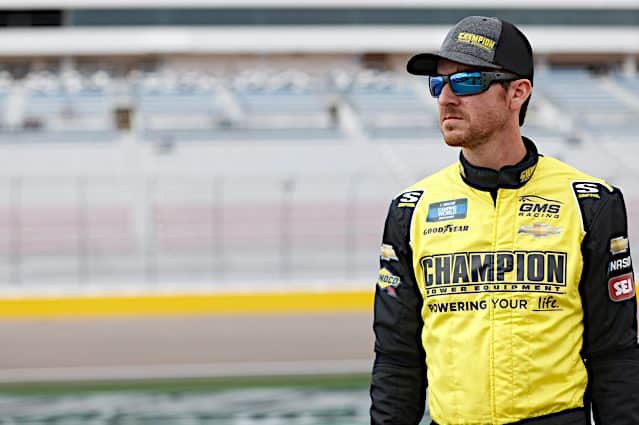 Grant Enfinger entered the NASCAR Camping World Truck Series playoffs at the bottom of the heap … almost. Seeded ninth, the 10-year veteran went winless through the first 16 races of the season and had just three top fives and seven top 10s all year. Something was just off with the No. 23 team.

But all it took was a single race to put Enfinger right back into the championship conversation.

In the Truck Series return to Lucas Oil Indianapolis Raceway Park after a 15-year hiatus, Enfinger led just 13 laps en route to his first victory since 2021. A late caution set up an overtime finish, and he took the lead, the win and the first guaranteed spot in the Round of 8.

“Well, we’re finally moving forward!” an elated Enfinger said about his win. “This is my first win since [Martinsville 2020]. [We had a] terrible [regular season], not because of these guys behind me, you know we’ve just been a little off as an organization.

“I can’t say thank you enough to Mike Beam, Maury Gallagher, Ron Booth, everybody at GMS Fabrication, and everybody on this No. 23 team. We’ve been working so hard because we’ve been sucking. It hurts to say it, but we have had a terrible season to this point, but we had a great No. 23 Champion Power Equipment Chevrolet all day.”

Interestingly enough, the win came just three races after Enfinger was reunited with crew chief Jeff Hensley, who sat atop the pit box for the veteran driver for his four full-time seasons with ThorSport Racing. In fact, there’s a level of trust between the two that is one of the keys to finding success on the race track.

“For four years, we’ve rode the roller coaster together,” Enfinger explained when asked about the trust level. “We’ve been in the lows, we missed the playoffs in our first year together, but we haven’t missed it since. We’ve had some success together. He’s a racer and I’m a racer, and neither of us are very smart, but we put it together tonight.”

Following those four full-time seasons at ThorSport, 2021 put Enfinger in a precarious position where he was forced to share a ride with Christian Eckes due to a lack of funding for a full season with the organization. And though he did miss one race during 2021, Enfinger managed to put together a full schedule by running for Rohrbaugh Racing for the races Eckes had in the ThorSport ride.

The part-time schedule raised questions about whether the veteran’s career might be winding down, and that’s where GMS Racing came in. Last October, the organization announced it had signed a two-year deal with Enfinger, who had previously been with the team in the ARCA Menards Series.

But despite the team’s strong performance over the past few seasons, Enfinger’s year didn’t start off well at all. He had a DNF in the season opener at Daytona International Speedway and followed it up with a disappointing 23rd-place finish at Las Vegas Motor Speedway.

Deep in the standings, Enfinger mounted a string of five top 10s, including a pair of third-place runs at Darlington Raceway and Kansas Speedway, but the majority of his season has resembled a roller coaster more than that of a championship contender.

With all of that said, is it realistic to believe Enfinger even has a chance at mounting a serious run at the championship?

One thing he has going for him is that he’s already locked into the Round of 8 and doesn’t have to worry about the next two races at Richmond Raceway and Kansas Speedway. Instead, he can look ahead to the next set of three races that stand between him and the Championship 4.

The Round of 8 kicks off in mid-September at Bristol Motor Speedway, a track that’s been a relatively good one for Enfinger. He’s never finished outside the top 10 at the short track and has a best finish of second last season.

Then the series hits Talladega Superspeedway where one of Enfinger’s seven wins came from in 2016. He’s led 96 laps at NASCAR’s largest oval track and two of his first three career victories were at superspeedways after the win in the season opener at Daytona in 2020.

Of course, if there isn’t a win at one of those two races leading to the final event in the Round of 8, the series heads to Homestead-Miami Speedway where Enfinger has a trio of top-10 finishes.

While Enfinger hasn’t won at two of the three tracks that sit between him and his shot at joining the Championship 4 for the second time in his career, enough consistency can work in his favor as well. He does need to start winning more stages, though, as his seven playoff points put him at a disadvantage against the majority of the rest of the playoff field, most of whom have double-digit playoff points to carry through the next five races.

Despite the results this season before the win two weeks ago, it’s important to remember that Enfinger and Hensley know how to navigate the playoffs. The pair have been there three times and that included a 2020 trip to the Championship 4 in Enfinger’s career-best season to date.

If Hensley and Enfinger can turn their long-time trust into results on the race track, there’s a very real chance the rest of the playoff field needs to worry as the season winds toward its close.

It’s a long shot but there’s reason to believe there’s a chance.