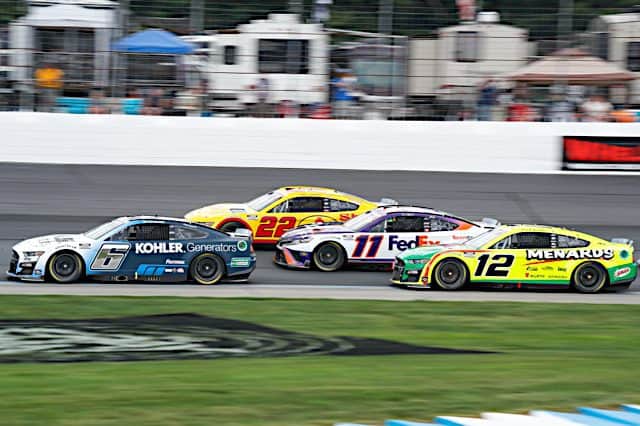 After years of speculation over whether it might happen, NASCAR is finally in a position where its postseason could consist entirely of race winners.

Whether it’s a good thing or not is a question that depends on your idea of what NASCAR racing should be.

The arrival of the Next Gen car has been something of a shot in the arm for the NASCAR Cup Series, fostering a regular season that’s been unpredictable both in terms of winners and overall race quality. Tracks that have historically delivered snoozers have excelled.

Along the way there have been a whole host of winners, including some genuine breakthrough stories for drivers like Daniel Suarez, Ross Chastain and Tyler Reddick.

There have been familiar faces in victory lane, too. All four of Hendrick Motorsports’ drivers won in the first 11 races. Joe Gibbs Racing teammates Denny Hamlin and Kyle Busch knocked out wins in the spring. Joey Logano entered the winners bracket at Darlington Raceway.

The mix of new stars and familiar faces have accounted for 15 different winners in the opening 23 races of the 2022 season. That level of parity is something NASCAR dreamed of when it launched the new car, making the Next Gen era intriguing to follow.

But with the playoffs drawing near it also has some genuine title contenders feeling nervous.

Ryan Blaney’s had a tremendous 2022 season. He sits second in the standings and has eight top fives on the year, trailing only Chastain (10) and Kyle Larson (9).

But the No. 12 team has yet to get to victory lane this year. With 15 winners and only 16 playoff spots available, that means Blaney finds himself on the playoff cutline with three races remaining before the postseason.

The North Carolinian has a 19-point edge on Martin Truex Jr., who now finds himself out of title contention provisionally despite sitting fourth in the regular season standings. Erik Jones sits a strong 14th in points, but is essentially a non-factor for the playoffs without a win.

Meanwhile Briscoe and Cindric, whose seven-combined top fives are fewer than Blaney’s, are set for their playoff debuts at the beginning of September.

This has always theoretically been possible in NASCAR’s current “win and advance” playoff structure. The postseason format was made to put an emphasis on winning when it first came around in 2014. But never has winning meant more, or consistency meant less, than in 2022.

For the first time in NASCAR’s playoff era, there’s a chance that one, or even multiple, drivers in the top five in points could be knocked back to 17th and removed from title contention as the playoffs arrive.

From a drama standpoint, this is an intriguing development. It’s made following the summer stretch as interesting as any season in recent memory. Trips to places like Sonoma Raceway and Michigan have truly mattered in a season-altering way.

But it’s worth noting just how far removed this format is from NASCAR’s history.

Look back to nearly any other year and consistency has mattered — at least a little. It surely will again come playoff time, too. But during the start of this unique new era of NASCAR, winning has truly meant everything.

Historical champions of NASCAR often secured their titles through sheer consistency. Winning races wasn’t always enough to top the standings at season’s end. Someone like Matt Kenseth or Alan Kulwicki could come around and top 10 their way to the Cup.

That’s no longer the case in 2022 — at least not during the regular season.

If Kyle Busch doesn’t sneak by Reddick and Briscoe after they crash at the Bristol Motor Speedway dirt race, he likely doesn’t make the playoffs. Had Larson not narrowly fended off Austin Dillon at Auto Club Speedway in February, last year’s dominant Cup champion could have found himself on the outside looking in with the postseason approaching.

You won’t find many people that think Cindric or Briscoe are more likely to win this year’s title than Blaney or Truex. Yet the first pair are all-but locked into the postseason while the latter duo are at genuine risk of finding themselves on the outside looking in.

There’s nothing inherently wrong with this given that the teams knew the risks going into the year. Everyone understands that the modern championship format can leave any teams that don’t win on the outside looking in come playoff time. This is the NASCAR equivalent of a 7-8-1 Carolina Panthers team making the NFL playoffs while the 10-6 Philadelphia Eagles missed out in 2014 – a consequence of the NFL’s focus on division champions in its two-conference playoff structure.

It’s been the same for everyone all year and has made for an exciting run through what’s typically a late summer lull for the sport.

But it is going to feel a bit strange come the Southern 500 if two top-five point contenders from the regular season aren’t among the Field of 16 competitors taking playoff photos.