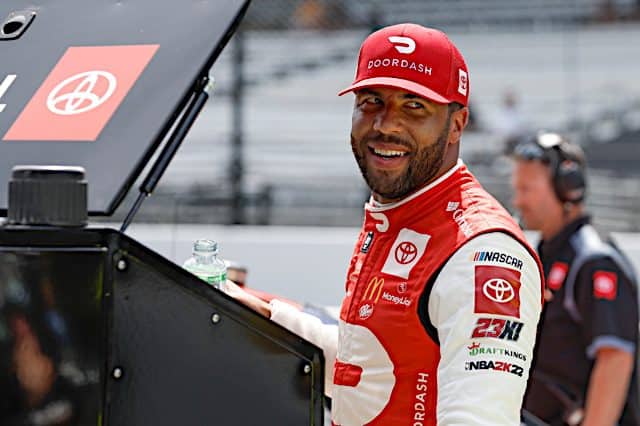 Bubba Wallace will be back with 23XI Racing for 2023 and beyond.

23XI announced a multi-year extension with the NASCAR Cup Series driver on Aug. 12.

The re-signing comes on the heels of Wallace’s first career pole and a runner-up finish at Michigan International Speedway last weekend.

“Bubba was a key part of the early stages of 23XI, and I am thrilled that he will continue with the team,” team co-owner and fellow driver Denny Hamlin said in a team release. “When we announced Bubba as our first driver the goal was to help him take his career to a higher level, and we have done just that.

“Bubba and the No. 23 team earned the organization our first win and first pole award, and with a career-best four consecutive top-10 finishes heading into Richmond [Raceway] this weekend, Bubba is continuing to get more competitive each week. We’re excited to see his growth as he and the team work toward achieving our goals.”

See also
5 Points to Ponder: How Much Emotion Is Too Much?

The exact length of the extension was not announced.

“It feels great to get this renewal done and to know I have a home at 23XI Racing,” Wallace said. “Thanks to [team co-owner Michael Jordan] and Denny for continuing to believe in me. We’ve come a long way together in less than two years and we’ve checked off some major goals along the way — including the team’s first win and first pole. We know we still have work to do, both on and off the racetrack, but I feel good about our team and the direction we’re heading.”

In two seasons with 23XI, Wallace has scored a win at Talladega Superspeedway, as well as seven top fives and nine top 10s in 49 starts. Wallace is currently on a career-best streak of four consecutive top 10 finishes in the Cup Series.

Denny: “He’s going to bring a lot of dollars to Mike and me….at least for now!”

Yep, and that’s exactly why they hired him. He’s the only half black driver and smart sponsors realized that both Nascar and the TV announcers would keep him in the news and on the screen a LOT. Riding with him along with his in car camera for 3 straight laps is shoving him down our throats a little too much though. Looking at all the cup driver’s and teams, it should be very easy for a Gibbs car to finish the season in the top 20. Wonder how illegal that car is though.lol