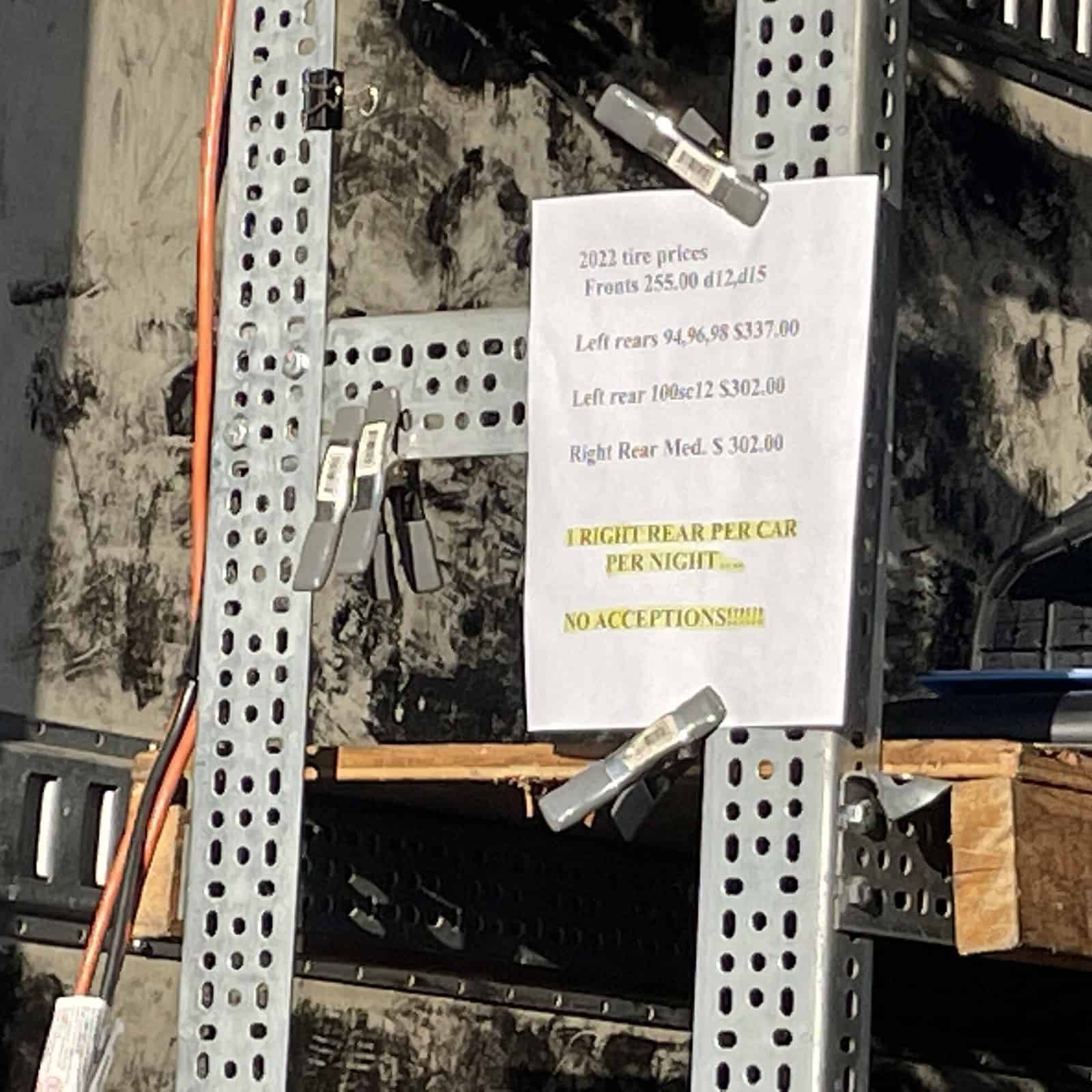 2021 saw racing tires one of the many commodities in short supply across the nation as the economy reeled from the COVID-19 pandemic. But sadly, here it is August 2022 and tires, or lack thereof, remains a storyline across dirt racing.

This is sadly as dirty a half dozen as they come.

I thought about starting this article recalling the USAC Winter Dirt Games tire scandal at Bubba Raceway Park in February, but I already wrote a full article on that mess.

Instead, my first real exposure to the ongoing tire shortage having an impact at the track came at Selinsgrove Speedway in April. Selinsgrove, which was hosting an unsanctioned 410 sprint car race in Pennsylvania on a Sunday after the All-Star Circuit of Champions had been in residency in the state, took a blow when ASCoC regulars were reportedly told to stay away from the track after Port Royal Speedway took exception to Selinsgrove hosting their race minus an ASCoC sanctioning fee.

But another blow came to those of us at the track Sunday when it was announced, well into the racing program, that the feature distance was cut from 30 laps to 25 in no small part due to a number of race teams starting even hot laps that night on used rubber.

In the grand scheme of things it didn’t matter much. Anthony Macri and Brent Marks, arguably the two most dominant drivers in 410 sprint car racing this year, decided the feature between themselves. But the tire shortage reared its head, cutting down an advertised distance after thousands of tickets had been sold and rendering the midfield runners all but limping to the finish.

Fast forward to this summer, and the tire shortage grabbed one of its biggest scalps of 2022 with the announcement that the Flo Racing Night in America late model series, a high-dollar, high-visibility race at the nationally recognized 34 Raceway in Iowa had been canceled.

Tuesday night's Castrol FloRacing Night in America event at @34Raceway has been canceled due to the ongoing tire shortage.https://t.co/it2Tz7z0rJ

It was probably inevitable given just how much super late model racing has been going on this summer. Super late models in this country are seeing a level of schedule congestion usually reserved for European soccer, with the World of Outlaws, Lucas Oil Late Model Dirt Series, DIRTcar Summer Nationals, XR Super Series, Flo Racing series and others all crisscrossing the country this summer.

Still, this was a national tour race that wasn’t outside the geographic footprint of where the sport has been competing. A $22,000-to-win race going down the tubes is a major misfortune.

The Iowa racing scene took another such hit this week with the announcement that Yankee Dirt Classic also had fallen victim to tire shortages despite not being scheduled for nearly another month.

Not only does the race cancelation mark the premature end of the racing season at 300 Raceway, it also marks only the second time since 1978 that the event will not be contested.

Yes, I am aware that there is a big difference between asphalt super late model slick tires and dirt racing tires of any kind. But let’s face it, the Racetrack Revival at North Wilkesboro is a huge deal, a racing program with national visibility that drew a NASCAR Camping World Truck Series-size crowd for its debut modified race.

I still have reservations about the quality of race that they’ll be able to put on at North Wilkesboro as a dirt track, but I’ll definitely be there to take in at least one of those dirt racers, as will many dirt trackers and track chasers across the country. Even losing one of those dates cuts down what is scheduled as a once-in-a-generation event. Because if an asphalt super late model race in the heart of NASCAR country is vulnerable, a dirt race in an already saturated schedule of national racing is, too.

After this past weekend, the Ultimate Super Late Model Series may be facing the biggest tire fiasco since USAC’s in February. Here’s the facts. Chris Ferguson was disqualified from an apparent win in Saturday’s $20,000 USA 100 at Virginia Motor Speedway on the grounds that the tire compound he ran was not the same as that mandated for the event.

Ferguson, however, took major reservation to the disqualification and took the discussion to social media.

In terms of PR, there’s no getting around it: Ferguson is winning the battle. Dirt social media accounts have been flooded with statements of support for Ferguson, the Show-Me 100 race winner back in May. It’s to a point that the director of the Ultimate Series had to post a plea to social media as well to let the facts play themselves out, as the series has committed to review the disqualification.

DirtonDirt did a detailed recap of much of the circumstances surrounding the DQ, and having read it I can’t see a clean resolution to come. It sounds like two parties talked past each other, and it’s a fair question whether this ever would have come up if right-rear tires weren’t in such short supply. But what remains central to the story is that tire codes are the story, not the race that said tires put on on the racetrack. It does no one in the sport any good to have races decided in inspection.

The Knoxville Nationals Are Broken

How can I write that considering that tonight only marks the second night of the four-race crown jewel sprint car race? Because I remember what the race format did to last year’s Nationals feature.

For those who don’t remember, a thrilling battle for the race lead between eventual race winner Kyle Larson and 10-time World of Outlaws champion Donny Schatz was derailed by a scheduled mid-race break that saw all the cars coast down pit road for race fuel, right-rear tires and adjustments.

No, this format has nothing to do with a tire shortage. And yes, I would have legitimate concerns about the ability of a right-rear sprint car tire to go a full 50 laps around Knoxville Raceway. There’s been no shortage of long-distance dirt races in all disciplines that have ended in a flurry of late-race cautions as tires go pop.

Which begs the question: why not just shorten the damn feature? The opening 25 laps of last year’s Nationals were rousing and would have been well worthy of crown-jewel status, with two titans of the sport trading blows.

Hey, that’d at least save some tires.