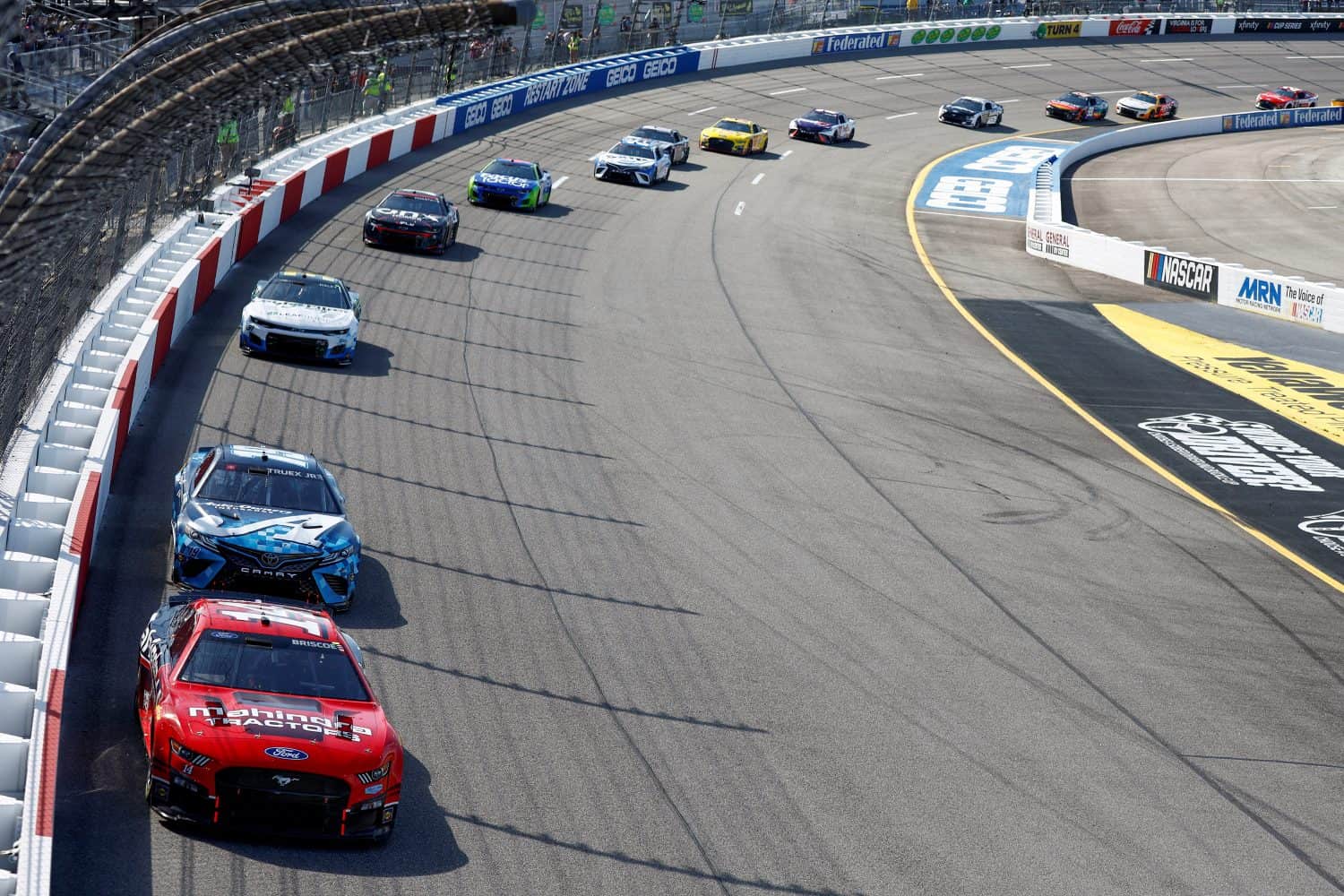 Richmond Raceway looms in the windshields of the NASCAR Cup Series this weekend, with just three races left until the end of the 2022 regular season, and only one postseason spot up for grabs, far more dramatic than any other late-season situation in the playoff era.

I went down Virginia, seekin’ shelter from the storm
Caught up in the fable, I watched the tower grow
Five-Year Plans and New Deals, wrapped in golden chains
And I wonder, still I wonder, who’ll stop the rain?
– Creedence Clearwater Revival, “Who’ll Stop the Rain?” (1970)

Regarding this race weekend, at least, John Fogerty missed the mark a bit. The storm is the aforementioned playoff drama, and it’s followed the field all season long, but as a Richmond native, I can confirm that the rain will stop for race weekend (at least I hope so, given how fickle the weather in the summer here can be). Some pretty heavy storms rolled through in the middle of the week, cooling things down for the weekend.

At the risk of sounding cliché, that won’t cool things down on track on Sunday, Aug. 11. A stunning 15 of 16 playoff spots are already taken, with just one guaranteed slot remaining. If that’s filled by the end of Richmond weekend, that’ll put drivers already with a win in danger of falling below the cut line if a winless competitor makes it to victory lane.

That said, let’s take a look at some of the biggest winless contenders with a chance to lock up a playoff spot this weekend.

With three wins in the last six races at Richmond, zero finishes outside the top five since fall 2018 and 725 laps led in that same span, Martin Truex Jr. has become the king of (and typical default pick for) Richmond.

An inauspicious start to his Cup career in the Commonwealth (41st and 40th in 2006) wasn’t the best sign for Truex, and he was notoriously not very good on short tracks for years and years. Once he arrived at Furniture Row Racing, and with the subsequent move to Joe Gibbs Racing, Truex found his groove; in his first 10 seasons, he recorded two wins. The eight full-time campaigns since have featured 29 victories.

Truex is looking for No. 30 since the move to FRR before the regular season ends and will likely need it in order to make the playoffs despite being fourth in regular points. Richmond is the ideal venue for him to make a run at it; he hasn’t finished outside the top 10 in a stage since fall 2017.

It seemed like Ryan Blaney was destined to never finish at race at Richmond inside the top 10 — at least, not until a year ago. It wasn’t until his 10th race, last spring, when he managed to come home better than 15th, and he followed that 11th-place effort up with a 10th in the fall.

This spring? Seventh with a race-high 128 laps led. Prior to that, Blaney hadn’t led a single circuit there.

Similar to Truex, Blaney’s had a great season yet still has yet to win a points race — as hard as he tried to put that window net back up in the All-Star Race, it only counted as a non-points victory. The No. 12 team is second in points but hasn’t managed a victory, though Daytona International Speedway in a couple weeks provides Blaney an opportunity to defend his race-winner title there and secure a walk-off clinching of a postseason berth.

That said, Blaney can put his troubles at Richmond way behind him with a win this weekend. Don’t be shocked to see the Nos. 12 and 19 duking it out for the win and a chance at the title.

Bubba Wallace has suffered a similar fate to his good friend Blaney early on in his Cup career: just one finish inside the top 20 at Richmond, a 12th in the fall of 2019. Outside of that? Zero finishes better than 25th.

Given how horrendous his 2022 quickly became thanks to a host of bad luck, wrong-place-wrong-time instances and more, this weekend might just be something to write off and move on to Watkins Glen International. But given his recent finishes (five straight top 15s, four straight top 10s with his last two races featuring results of fifth and second, respectively), maybe things aren’t so bleak.

It’s also worth noting that he never finished outside the top 20 in NASCAR Xfinity Series competition at the short track, with two top 10s and no finishes worse than 16th in six starts. Considering Wallace is coming off a pole last week and an eventual runner-up finish, the No. 23 team has some of the momentum it needs to attempt a last-ditch effort at a playoff spot.

Erik Jones would have two top-10 finishes in Virginia’s capital if not for a post-race inspection failure back in the fall of 2019, which relegated him to the back of the field and broke up a 1-2-3-4 Joe Gibbs Racing finishing order.

He had a few other good runs while in Gibbs equipment there, including four straight top 15s, but a solid fifth-place start in the spring of 2022 with Petty GMS Motorsports didn’t end well (23rd).

Heading into the weekend, Jones hasn’t had a bad 2022; eight top 10s have been a part of some sneakily good runs. However, he’s still out of playoff contention, barring a win, and needs said victory to keep his postseason hopes alive.

Maybe-or-maybe-not-retiring Aric Almirola initially seemed like he was making 2022 his final season of racing until things became a bit more nebulous with his future plans, but regardless of that the No. 10 is still looking for its first win of the year and a postseason spot.

Despite his time in the No. 43 a period of dealing with mid-pack equipment, Almirola made it work with four top 10s at Richmond. In the Stewart-Haas Racing No. 10, he’s improved further at Richmond with three top 10s, none of which were lower than eighth. The spring didn’t go so well, Almirola finishing outside the top 20, but if the past is any indication he could be a dark-horse contender come Sunday.

I limited the driver-specific sections to those sitting in the top 20 in points, but that’s not to say someone else could pull off a victory.

It’s easy to overlook Brad Keselowski this season, as he sits 28th in points and far, far out of the playoff picture barring a win. Richmond is a place he could do it, though, as he’s won twice there over the years with 12 of his 25 starts resulting in top-10 finishes.

Austin Dillon hasn’t finished lower than 11th in his past four Richmond starts, three of those efforts resulting in a top 10, though brother Ty has yet to finish better than 20th there.

Chris Buescher came home 15th in the spring, while Michael McDowell‘s best effort was a 12th in 2016; both of them have been adept at road courses this year, though, so Watkins Glen next week might be their next prominent shot at a victory. Ricky Stenhouse Jr. has just one top 10 at Richmond and that was over five years ago, and Cole Custer has yet to record a top 10 at Richmond in general.

Justin Haley‘s Cup debut at Richmond resulted in a dismal 29th-place finish, but he recorded three straight top 10s in Xfinity over the past couple years. Among other winless drivers with just one Cup start at Richmond, Harrison Burton came home 18th and Todd Gilliland 25th in April.

With three races and three wildly different track configurations (short track, road course and superspeedway) left until the playoffs, Richmond might make for the most flared tempers before the postseason begins. The Federated Auto Parts 400 begins on Sunday at 3 p.m. ET with coverage on USA Network.