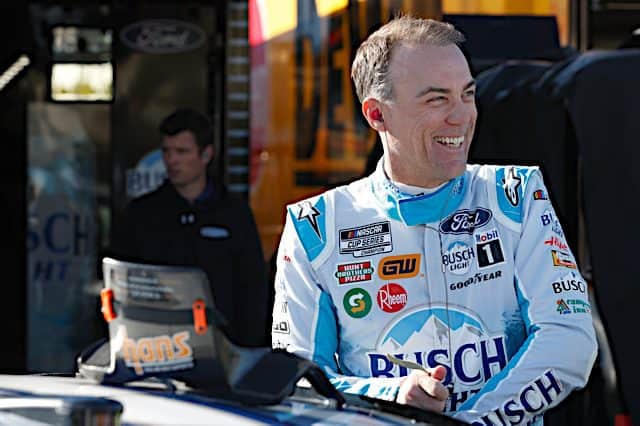 That one’s hard to say.

With his win last weekend at Michigan International Speedway in the Cup Series, the 58th of his career, Kevin Harvick broke a 65-race winless streak dating back to the 2020 Bristol Motor Speedway night race. With Kurt Busch now missing a fourth race with concussion-like symptoms, Harvick also became the most experienced Cup driver in the field.

At age 46, and with retirement rumors circulating, it is worth wondering if Harvick will ever win again. Although, to be fair, many were already wondering that.

At the start of 2022, I made a sweeping claim in conversation with my brother that Harvick and Martin Truex Jr. would never win again. I predicted both veteran drivers would struggle to adapt to the Next Gen platform, go winless and hang up their helmets at the end of this year or next.

Harvick just proved me wrong, and I’m seriously second-guessing what I said about Truex.

If you thought Ryan Blaney and Martin Truex Jr. were safe bets to make the playoffs going into the weekend, think again.

With Kevin Harvick's win, he jumps ahead of Truex with just ONE SPOT LEFT in the postseason remaining! #NASCAR pic.twitter.com/fupte1E9SQ

So I’m going to say no, Harvick is not done winning. It just took him some time to find his footing in a car more mechanically different from a 2021 Cup car than that 2021 car was from the 2001 Monte Carlo in which Harvick scored his first victory.

Sixty-five races isn’t even the longest streak Harvick has broken. In the 2010 Aaron’s 499 at Talladega, Harvick broke a 151-race winless streak dating back to the 2007 Daytona 500.

Before breaking that winless streak, Harvick was a hot-and-cold, flash-in-the-pan type of young gun. He missed the playoffs their first two years and again in 2009. He’d only won multiple races a year twice. Ten years into his Cup career, he’d won 11 races: not an insignificant number, but fewer than Ryan Newman.

In the 12-and-a-half years since the 2010 Aaron’s 499, Harvick has won 48 races, one championship and is a likely lock for the Hall of Fame. His second wind is one of the most impressive in NASCAR history.

He has visited victory lane 28 times in the #NASCAR Cup Series since then, putting him in an elite class of racing legends. pic.twitter.com/iFCkDyzHIV

Are we set up for a third wind, one that carries the dominant Harvick we know past the big 5-0 in years and 6-0 in wins? Who’s to say? I’m done underestimating Harvick.

I will concede there was a definite finality to the celebration in Michigan. Harvick took his time with a slow salute to the fans and then well and truly burned it down before giving his daughter Piper the flag.

Dale Earnhardt Jr. said on the NBC broadcast, “this celebration feels different.” Whether he was referring to the winless streak’s end, or if he thought Harvick was treating this win like his last, I don’t think anyone can say.

It does call to mind Clint Bowyer’s streak-breaking victory at Martinsville Speedway in 2018, one he celebrated with both his child and his SHR crew. That didn’t end up being Bowyer’s last win; that would come later that year at Michigan (of all places) after a battle with Harvick (of all people) was cut short by rain.

Although to be fair, you could never accuse Bowyer of not celebrating every win like it was his last. Harvick might have just learned something from his old teammate.

I’ve learned my lesson. I’m not going to bet against Harvick, and you shouldn’t either.

Ryan Blaney or Martin Truex Jr: who’s in and who’s out of the playoffs by Daytona?

As much as I’d love to say neither and watch the fireworks, if I’m going to pick, it has to be Truex.

Despite the shot I called back before Daytona, the fact both Truex and Ryan Blaney are winless after 23 races is one of the biggest surprises in a season full of them. Truex is a former champion racing for Joe Gibbs Racing, Blaney looked primed for a breakout season after winning multiple races in ‘21 for the first time in his career. And yet, neither has managed even a runner-up result in 23 regular-season races.

Right now, Truex is fourth in the regular-season standings, 19 points back of Blaney in second. Numerology that would please Darrell Waltrip aside, I’m betting that the No. 19 car can close that gap over the next two races.

Truex owns three wins at Richmond Raceway and one at Watkins Glen International. Regardless of playoff pressure, the three-quarter-mile oval in the Virginia capital might just be Truex’s best shot at a victory this season.

💬 from @MartinTruex_Jr as he fights for a spot in the #NASCAR playoffs. pic.twitter.com/O3siFcVgBm

Across those two tracks, Blaney has only three top 10s. Despite his pole and seventh-place run earlier this year, Richmond has long been a thorn in Blaney’s side, and it’s finally going to sting him.

At New Hampshire Motor Speedway, the Cup Series’ most recent visit to a flat-ish, short-ish track like Richmond, Truex won two stages while Blaney failed to score a single stage point. It is not out of the question for the two drivers to be tied by the end of stage two at Richmond.

From there, it’s really anybody’s game. Yes, the Toyotas have struggled on the road courses this season, but they looked to have turned it around at the Indianapolis Motor Speedway road course. Yes, Blaney is a world-class pack racer, but Daytona is a total crap shoot. Heck, with what we saw entering turn one at Indianapolis, Watkins Glen’s 90-degree first corner might be a crapshoot too.

So then, if you’re trying to predict who comes out on top, it all comes down to Richmond. At Richmond, I’m taking Truex over Blaney every day of the week and twice on Sundays.