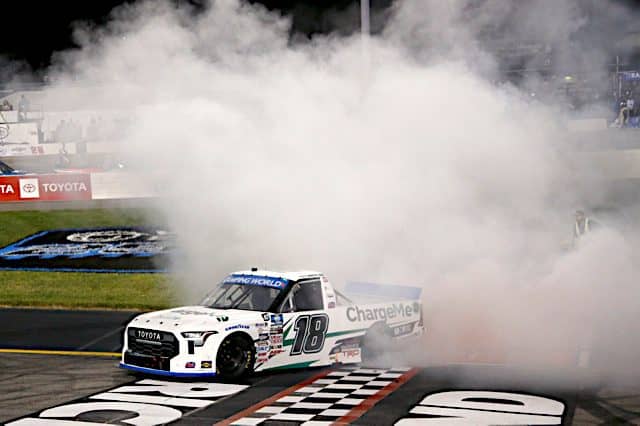 The No. 18 Kyle Busch Motorsports driver took the lead off pit road after stage one and never looked back to claim his third win of the year and fifth of his Truck career.

Smith led 176 laps en route to the victory, locking himself into the next round of the playoffs.

“I’ll leave that to you guys,” Smith said when asked if the championship goes through him and his team. “Like I said at media day, if the good Lord wants it to be our championship, it will. If it’s not, it’s not. But I like how everything’s going right now, for sure.”

Taylor Gray drove from 24th to sixth by the end of his night, while Matt Crafton crossed the line in seventh. Christian Eckes, Zane Smith and Carson Hocevar completed the top 10.

As far as the racing goes, it was a relatively quiet race, save for one crash in the final stage. Stages one and two went clean, as no cautions for incidents occurred in the first half of the race.

Majeski won stage one but lost a couple of spots on pit road during the caution. His jackman fell down in the box as he went over the wall, and Majeski couldn’t avoid running into him, stopping short of his markers.

Incredible by jackman Paul Steele to still finish @TyMajeski's stop after this. pic.twitter.com/WETHtNQkjQ

Thankfully, the jackman, Paul Steele, got up quickly and finished the stop for the No. 66 ThorSport Racing team. He remained on pit road and working the rest of the event.

With the slip-up, Chandler Smith and Nemechek got out ahead of Majeski on pit lane, and Smith darted out front on the restart. Smith and Nemechek held their spots through stage two, while Enfinger got by Majeski to place third in the stage.

Stage three was pretty much the same, with Smith and Nemechek out front up until about 35 to go. As Smith went by the lapped truck of Nick Leitz, Hocevar made contact with Leitz’s No. 33, which spun around and backed hard into the outside wall.

After the ensuing restart, Smith was able to soar back out in front and maintain the lead through the end of the race.

In the playoff race, Crafton is now three points above the cut line, while Hocevar and Eckes are three and six points below, respectively, heading into the final race of the Round of 10. Enfinger and Smith have clinched their spots in the next round.

The final stop in the Round of 10 for the Truck Series is Kansas Speedway on Friday, Sept. 9. Television coverage for the Wise Power 200 kicks off at 7:30 p.m. ET on FOX Sports 1.