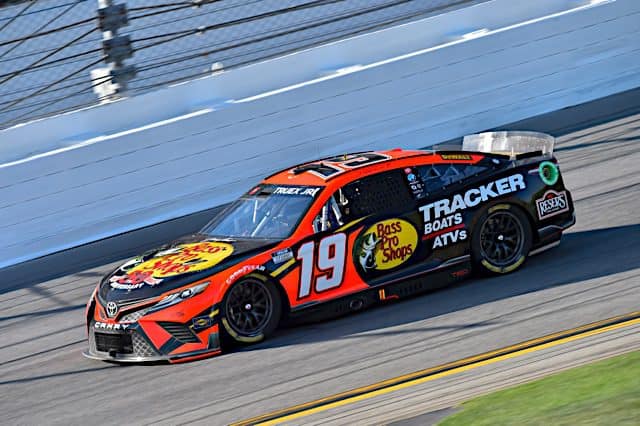 There are just three more chances left for NASCAR Cup Series drivers to lock themselves into the playoffs. How can we get the winner at Richmond Raceway to be in your daily fantasy NASCAR DraftKings lineups? Read on to find out before tuning in to the Federated Auto Parts 400 on Sunday, Aug. 14 at 3 p.m. ET on USA Network.

Richmond, known as the Action Track, is a short, flat oval with more tire wear than other recent tracks we’ve visited (unlike last week’s race at Michigan International Speedway). Cup has already visited the Virginia D-shaped oval earlier this year as well as some other flat tracks, like Phoenix Raceway and New Hampshire Motor Speedway. The 2022 events should provide more quality clues into which drivers will run well here in the first year of the sport’s Next Gen chassis. Just keep in mind that Phoenix and Richmond were run several months ago, so teams may have adjusted their setups since then.

You could also look at Nashville Superspeedway and World Wide Technology Raceway at Gateway, tracks that also have lower banking in the corners. But these tracks are a little bit longer in length and shaped differently than Richmond. Recent trends should also come into play, too; certain drivers like point leader Chase Elliott are streaking as the sport enters its final push before the postseason.

Richmond has a tendency for long green-flag stretches, so you want to seek out drivers that have been successful on long runs through NASCAR’s Loop Data on green-flag speed. Previous short track success can also be studied, especially since drivers had such a small window to fine-tune their setups this weekend.

Before I share some who I’m going with this week, let’s take a look at my results from Michigan:

Unfortunately, we didn’t really know how Ricky Stenhouse Jr. would’ve done if he went the full distance, as the No. 47 Chevrolet was involved in a big crash early on. On the other hand, Christopher Bell was running at the front before he moved up in front of Ross Chastain and ruined his day.

Even with those mishaps, this lineup won both the $1 multi-entry double up and the $6,000 Quarter Jukebox tournament (just barely in the latter).

The top score in the Quarter Jukebox was 357.8 and had a lineup of Denny Hamlin, Ryan Blaney, Harvick, Wallace, Alex Bowman and Austin Hill.

I really like Joe Gibbs Racing this week, as does DraftKings, with three drivers over $10,000. Kyle Busch was a little bit expensive for me to fit in my lineup, especially since he hasn’t finished in the top 10 since June at Gateway.

So I pivoted to Hamlin, who has very respectable stats at Richmond. In the past 13 events, he’s won twice while earning nine top fives and 11 top 10s. He hasn’t even finished worse than 16th during that span. Plus, last year Hamlin led 207 and 197 laps in the spring and fall races, respectively, posting an average result of 2.0.

Did I mention that one of his Richmond wins came this year? The driver of the No. 11 Toyota took advantage of the late tire falloff and led the final five laps for his first victory of the season.

Hamlin did well at Nashville, too, this year, leading 114 circuits en route to sixth place. He then matched that result at New Hampshire a few weeks later. If he can jump out front from his third starting spot, Hamlin should be able to notch some fastest laps and laps led bonuses to pad your DraftKings score.

Hamlin’s teammate Martin Truex Jr. might just find his first victory of the year at a place where he won three times in the last six races, including last fall. Even when Truex doesn’t win, he finishes up front at Richmond, earning top fives in every race since fall 2018.

And if he doesn’t bring it home this weekend, Truex could still give you bonus fantasy points if he leads some laps. He led 80 in each of the past two Richmond events and was out front over 100 circuits in seven of the last 11 races there. A sixth-place starting spot puts him in good position entering the race.

Thus far in 2022, Truex has been out front despite falling short of victory lane. For instance, at New Hampshire, he took the helm for 172 laps before ultimately coming home fourth. He also led 82 laps at Nashville within the first 200 laps but wound up finishing 22nd.

Richmond serves as Truex’s best chance to lock himself into the playoffs, desperation which could make him more aggressive. However, I’m still willing to bet on the 2017 Cup champ at one of his better racetracks.

Erik Jones feels a tad bit pricey for his value, but he could still pay it off. Short tracks haven’t exactly been the No. 43 Petty GMS Motorsports team’s strength this season, so tread cautiously with him.

That said, a top-10 qualifying effort is a solid start for this driver. He’s also been successful at similar tracks. At Nashville, he advanced from 23rd to 11th, scoring 44 fantasy points on DraftKings. Also, at Gateway he went from 21st to seventh place, producing 52 DraftKings points for his effort. And at Dover Motor Speedway, Jones gained 15 spots to end in 10th.

Jones is unlikely to lead very many laps this week but has put himself in position as a dark horse contender. Take note. But also take heed; earlier this year at Richmond, Jones started fifth and ended up mired back in 23rd place.

For some reason, I really like the young NASCAR Xfinity Series full-timers this week. Ty Gibbs, who’s still filling in for Kurt Busch as he recovers from a head injury, has had very admirable results these last few weeks. He finished 16th at Pocono Raceway, 17th at the Indianapolis Motor Speedway road course and earned his first Cup top 10 at Michigan. Not bad for a driver making his first three starts at the sport’s top level.

I know Xfinity cars are different from the Next Gen Cup vehicles, but it doesn’t change the fact that Gibbs won at Richmond in NXS. He led 114 laps in April, sealing victory after contact with Toyota teammate John Hunter Nemechek. Last season, he was out front for 67 circuits before ending in seventh place. He definitely knows his way around the 0.75-mile racetrack and could perform well once again in the Jordan-branded No. 45.

Richmond has been very kind to Austin Dillon the last few years. He was sixth in the fall 2018 and spring 2019 events and earned a best finish of fourth in fall 2020. He even led 55 laps in that 2020 event. Then, last year, he came in 10th and 11th in the spring and fall events, respectively, and followed those up with another 10th this past April. A 25th place starting position helped to boost his DraftKings score in that race.

Unfortunately, Dillon hasn’t had good finishes lately, with four results of 23rd or worse in the last six races. However, he did get a 10th place at Pocono when both Hamlin and Kyle Busch were disqualified. A 13th at Michigan last week gives some hope he’ll bring momentum to Richmond with the No. 3 team.

Starting 12th, hopefully Dillon can avoid problems and put together a top-10 finish to continue his strong runs at this track.

Like I said, I like the young Xfinity drivers this week. Like Ty Gibbs, Noah Gragson also won a Richmond NXS race, triumphing in last year’s event. He’s only finished in the 20s twice in his seven career starts. In the 2020 NXS doubleheader, he ended eighth and fifth in each race, and in 2018, he finished Richmond runner-up.

Last week, Gragson looked strong at Michigan in the Cup event before making a mistake and crashing out. But he had qualified 12th, his best starting spot of the year for a Kaulig Racing program that’s in its first year racing full-time at the Cup level.

Gragson has two other top-20 results in Cup this year: a 20th at Talladega Superspeedway and an 18th at Kansas Speedway. Since Kaulig typically has good speed on shorter tracks, Gragson should earn his third top 20.