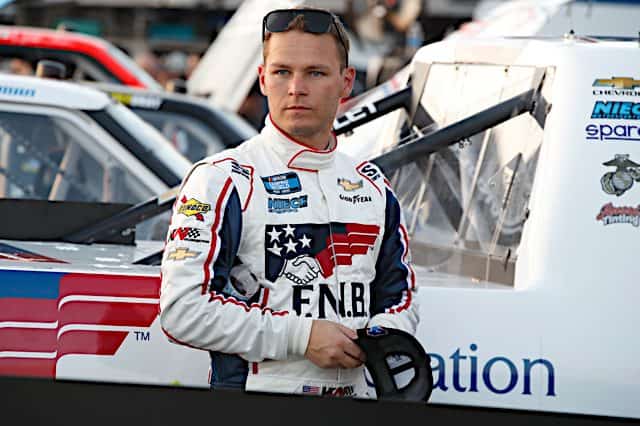 Brandonbilt Motorsports announced Saturday morning (Aug. 13) that they have signed Kris Wright to drive the No. 68 Chevrolet in nine of the final 12 races of the 2022 NASCAR Xfinity Series season in place of Brandon Brown starting at Watkins Glen on Aug. 20.  Wright will bring primary sponsorship to the team from the FNB Corporation, in addition to associate backing from the Wright Automotive Group and Big Dig Energy, sponsors that were with Wright at Niece Motorsports.

Brandonbilt Motorsports announces today a driver change that will find Kris Wright @KrisOnNASCAR piloting the No. 68 Chevrolet Camaro in nine of the twelve remaining races, beginning with the NASCAR Xfinity Series Race at Watkins Glen. pic.twitter.com/GvJANFiqhZ

“I am extremely grateful for the opportunity to be back in the NASCAR Xfinity Series garage, and surrounded by a great team [in] Brandonbilt Motorsports,” Wright said in a press release.  ““The team has been super helpful in trying to acclimate me into the No. 68 Chevrolet Camaro for the majority of the remainder of the 2022 season.”

In addition to Watkins Glen, Wright will drive the No. 68 at Darlington, Kansas, Bristol, Charlotte, Las Vegas, Homestead, Martinsville and Phoenix.  It is unclear at the moment what Brown’s plans will be for those nine races.

Wright comes to the team after running full time in the NASCAR Camping World Truck Series for Niece Motorsports.  Through 17 races, Wright is currently 26th in points with a best finish of 15th at Circuit of the Americas back in March and four DNFs, all due to crashes. In 41 career NASCAR starts at both the Truck and Xfinity level, Wright does not have a top-10 result.

The move comes after Brown’s team ran low on funding due to a multitude of factors.  Sadly, their funding problem can almost directly be traced back to Brown’s victory in last year’s Sparks 300 at Talladega Superspeedway and the winner’s interview on the frontstretch that followed.  The association with that situation led to corporate sponsors seemingly shying away from backing the team, in addition to other factors.

As a result, Brandonbilt Motorsports ended up staking much of the team’s future on a cryptocurrency known as the LGBCoin, named after the politically charged chant that evolved out of the mess in Talladega.

“Having the financial support of LGBcoin is incredible, especially at such a pivotal time in our team’s growth as we work to build to the next level of competition,” Brown said in a press release earlier this year.  “From wondering if we would have the financial means to continue to compete, to my first major win (at Talladega no less), to becoming an unintentional meme, this past season was a rollercoaster. The support of sponsors like LGBcoin empowers us to be as competitive as possible and I’m looking forward to competing hard on the track in 2022.”

However, NASCAR disallowed the LGBCoin sponsorship outright as it violated NASCAR’s new policy that forbids both political sponsors and those that are politically based.  As a result, the value of the LGBCoin tanked.  According to Crypto.com, the coin is currently worth less than one-millionth of a cent.  The entire total of LGBCoins currently said to exist are worth $273.83 at the current exchange rate.  This is as opposed to the roughly $180 million market cap on the coin at the time of the announcement, as stated in the linked CBS News article.

LGBCoin was the brainchild of James Koutoulas, the CEO of Typhon Capital Management and a lawyer (As of this writing, Koutoulas’ banner picture on his Twitter page is a picture of himself and Brown at Phoenix).  Koutoulas made significant financial promises to Brown and Brandonbilt Motorsports.  In the wake of the sponsorship being denied by NASCAR, Koutoulas appeared to step up and back the team on his own.

The value of LGBCoin collapsed almost overnight due to the denial.  U.S. Representative Madison Cawthorn was accused of insider trading by Senator Thom Tillis of North Carolina by pumping up the value of the coin prior to the announcement of the sponsorship.  It proved to be one of the factors in Cawthorn losing a primary challenge for his seat earlier this year.

“So LGB coin now, as we all see, is worth less than zero. So it was just kind of a bummer in the way that things happened,” Brown told Frontstretch‘s Dalton Hopkins back in March.  “I think that the way the crypto market works is that the value is based off of how many investors there are and how popular it is.

“The balancing act to keep it popular kind of went out of whack.  When it was denied sponsorship and the value of it dropped, I think it scared a lot of investors out.  And because of that, the value of the coin started going down enough to where they decided that they needed to just do a complete restructure.  Like, basically pause people where they’re at because of how much the value is dropping.”

Cryptocurrency as a whole then fell off a cliff.  The value of Bitcoin is down 48.5% in 2022 and down nearly 65% from the previous all-time high, although it is up about $6,800 per coin from recent lows.  This crash has wiped out a lot of people financially.  While Koutoulas has not commented personally, it likely hurt him financially as well.

The team has had some smaller sponsorships this year from brands such as Solid Rock Carriers and Zero FG Energy Drink, but they haven’t been able to fill the gap that would have been covered by the LGBCoin.  That led to Brown stepping out of the car at Indianapolis in favor of Austin Dillon, who was able to bring sponsorship from Maestro’s to the table.

See also
Austin Dillon Replacing Brandon Brown in No. 68 at Indy, Brown to Drive for MHR

Sad day for the sport. No sense in elaborating it will get erased anyway.

He can be sure to thank Kelli Stavast for his issues. 🤷‍♂️