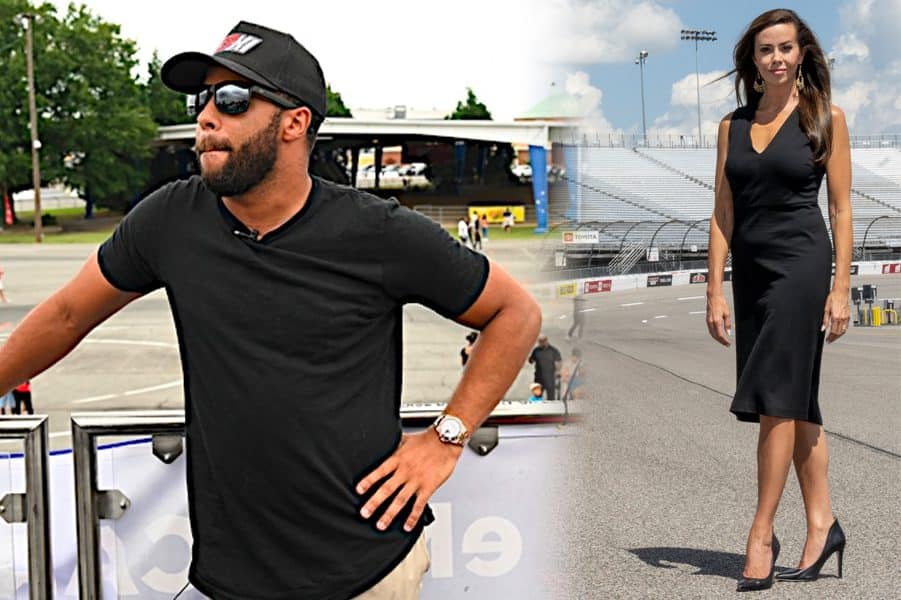 While much of the talk in racing circles has been about the resurrection of North Wilkesboro Speedway this month, another track dating back to the early days of the NASCAR Cup Series is having a revival of its own: Richmond Raceway.

And that revival is being led by new track president Lori Collier Waran and driver Bubba Wallace.

Waran became Richmond’s first female president when she took over the job last month from Dennis Bickmeier, who had held the position since 2011. While Waran is new to the role, she is extremely familiar with the racetrack. As a child, she helped her grandfather park cars for the Richmond races as a means to get to watch the competition.

“He would park cars here for a lot of the events here, especially for races,” Waran told Frontstretch. “That was a way he could afford to watch. He lived just a couple blocks away, and he wanted to be able to afford it, and he couldn’t always. So that was the way he could.

“He would bring me along to help him park sometimes, sort of piggyback on his shoulders and help him park cars. I was pretty terrible at it. But that was a great memory that I had with him.”

And while Waran’s interest in NASCAR waned in her teenage years, it was reignited when she started dating her now-husband.

That sort of NASCAR background should blend well with a track steeped in racing history.

Richmond has been on the Cup schedule every year since 1955, though it has evolved greatly over that timeframe. It started out as a dirt track half-mile before getting paved in 1968. It was then reconfigured to its current 0.75-mile layout in 1988, which is when its popularity exploded to become one of the hottest tickets on the NASCAR circuit.

From 1992-2008, the track sold out for 33 consecutive races, with additional grandstands being built along the way to get the capacity from over 59,000 to over 112,000. But then the 2008 recession hit, followed by a decline in NASCAR popularity.

Since then, seating has been reduced to 51,000. And there have been many races with far less fans in attendance than the smaller capacity allows. On top of that, Waran and company are now tasked with getting fans back out to the track after some may have gotten used to watching at home during the COVID-19 pandemic.

Waran and Richmond already cast out a big net to try to attract more fans on Thursday (Aug. 11) by hosting the first ever Bubba’s Block Party, hosted by Wallace. This brainchild of Wallace and NASCAR Vice President of Diversity & Inclusion Brandon Thompson featured Q&As with Wallace and Rajah Caruth, food trucks of Black-owned businesses, iRacing rigs, pit stop demonstrations by an all-Black crew and several musical performances, including the headliner, rapper Wale.

“The biggest thing is I want everybody that comes to Bubba’s Block Party to have fun,” Wallace said. “That’s the main thing. Come here and have fun, see Wale perform … and have a good time with friends, family and then realize where you’re at.

“It’s like, ‘Oh, we’re at a NASCAR track. Maybe we should go attend the race this weekend. … But it’s like to get them a treat, we got a whole bunch of racing pit stops, pun intended, to go out and broaden your horizon to what NASCAR is about.”

Oh and @BubbaWallace might’ve also sang along for the last song. pic.twitter.com/dHPWsRg5pS

It was Wallace’s choice for Richmond to be the place where the block party was held. It’s one of the few racetracks in Cup that are actually in the heart of the namesake city, with neighborhoods and businesses surrounding the track. The event was all part of his goal to attract a more diverse fanbase and make NASCAR a more welcoming series.

.@rajahcaruth_, making his second-ever Truck Series start this Saturday, is also out at Bubba’s Block Party for media availability at @RichmondRaceway. #NASCAR pic.twitter.com/5P8q5ldscF

“I go to NFL games, college football games and walk in, no problem,” Wallace said. “And go and buy overpriced food and beer. Right? That’s about the only problem. But you’re there for the game, you’re there to cheer on your favorite team, your favorite players, and it doesn’t matter what you look like.

“And that should be the same for NASCAR. You come to cheer on your favorite driver. It doesn’t have to be Bubba Wallace, as great as it is. But it’s to come and have a good time. And when you show up and you feel the vibe is off, that’s what we need to change. The vibe needs to be on no matter what. Yeah, you’re always going to disagree. Like that’s my favorite driver, this is my favorite driver. They don’t like each other. That’s sports, right? We always had that clash. That’s what makes people tune in and watch. But showing up, feeling like you’re welcome is most important.”

Bubba’s Block Party was a huge success. Wallace said there were 3,500 RSVP spots available, and it hit full capacity. Wallace and Thompson are already looking into holding another one in Birmingham, Ala., when the Cup Series goes to Talladega Superspeedway in October.

After doing a Q&A, @BubbaWallace is walking around, taking pictures with everyone who asks. pic.twitter.com/Td5KfSEuo5

As for Waran, her attention now turns to the racing this weekend, as Richmond hosts both Cup and the NASCAR Camping World Truck series. With tracks such as Pocono Raceway and Michigan International Speedway having crowds this year not seen since NASCAR’s boom, the focus shifts to if Richmond can follow suit and what tone will be set for Waran’s tenure.

But as for this Sunday afternoon, Waran will once again get to do something she did as a child with her grandfather.

“The thing that I’m most excited about is right after the anthem package, right after we hear the national anthem and we’re getting ready to have the race start, I’m going to cross over the track and I’m going to sit in the stands for about 10 or 15 laps and do nothing except watch the race,” Waran said. “I’m just gonna sit in the grandstands. I’m not going to go up to the suites, not going to do anything. I’m just gonna sit and watch and take it all in. And I’m looking very forward to that moment.

“That’s the moment that I’m doing nothing but just sitting with the fans, taking it in.”

Adam Cheek contributed to this article.

Wow. Bubba’s block party.
Sounds like she is really shaking it up. Why didn’t Humpy think of that?

I think we should get a picture of Bubba with his posse. I’m sure there is at least one in it.

This feels like more than all the Danica hype already! And it is going to get worse. Danica 2 baby!

Wow, the 19th place driver with a couple of top 5’s and a pole is now a bonafide star. Who would have ever guessed….You just got to shake your head at the stupidity that goes on today.

He gets a whole lotta network airtime as well, for a 19th place driver. Almost like another also-ran named Juan Pablo something or other …

“The headliner was @Wale, and @BubbaWallace presented him with a @23XIRacing jacket at the end of the show.

What he really wanted was a Dale Jr. jacket!

Ms Waran sounds like she has an interesting story. Wallace is same old same old. Looka me, looka me.

Bubba is a disrespectful fool. First the fake noose, then today he leaned on his car for the National Anthem. Nascar sucks!