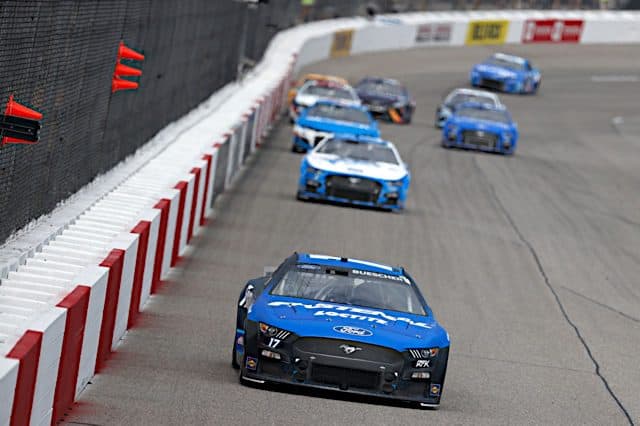 RICHMOND, Va. – For a while there, it looked like Chris Buescher might score his first NASCAR Cup Series win in six years.

As the laps wound down at Richmond Raceway on Sunday (Aug. 14), Buescher’s No. 17 Ford Mustang slowly entered the picture of potential race winner amidst several manufacturer-friendly competitors. Kevin Harvick passed a dominant Joey Logano for the race lead with 66 laps to go and Buescher soon followed, sparking a riveting pursuit of the No. 4 from the RFK Racing machine.

Though it didn’t result in a win, with Buescher finishing third, it did result in the 2015 NASCAR Xfinity Series champion’s second-best finish of the year and best effort on an oval.

“It was a heck of a run …we’re really proud of our team, everyone back at RFK,” Buescher said on pit road after the race. “This has been a racetrack that I’ve wanted to fill with water or put dirt on or something for a long time. We came here in the spring and had a tremendous run, a top-10 run — not quite the finish we needed, but knew coming back that [I] was finally optimistic coming back to race [at Richmond].

“After practice, I don’t know if I would’ve stayed with that sentiment, but the crew did a really good job overnight, had a lot of speed in this Fastenal Ford. Put us in contention to win a race. Wasn’t quite able to get it … lapped traffic in the way, couldn’t pick and get by them. … It was really fast there at the end, so even if everything went right, it would’ve been a heck of a race.”

Prior to Sunday afternoon, Buescher had just two finishes inside the top 20 at Richmond across 12 starts, his best a 15th-place result back in the spring of 2022.

A few post-race words with @Chris_Buescher on his third-place effort at @RichmondRaceway. So close for the No. 17.#NASCAR #FederatedAutoParts400 pic.twitter.com/ea9EmZRHwa

In that sense, Sunday’s race was a step forward. Though lapped traffic both helped and eventually hurt the No. 17 in his pursuit of Harvick, Buescher was proud of the adjustments the team made after qualifying 18th the day prior.

“I think everything [worked],” Buescher said. “I would say that we threw the kitchen sink at this thing last night. Team did a really nice job to dial it in so we had something to race with.”

With varying pit strategies throughout the field during the race, Buescher rolled down pit road for his final stop earlier than Harvick, hoping it would close the gap between the two Fords.

“Definitely hoped that would get it,” he said. “Ultimately, it was close — we had really good speed, we were able to close in on him, just too small of increments. It took a little while to ease up to him, got to him with some lapped traffic, but the same thing that held him up and got us to him, basically [ended] our run.”

With lapped traffic such a factor, Buescher was asked whether he thought they treated him fairly.

“Ultimately, yeah,” he said. “Everyone’s in the way at that point. When you’re fighting for a lead, you feel like the whole field’s in your way. For the most part.”

After Buescher’s wild flip at Charlotte Motor Speedway in May, the nine races since have featured four top 10s. While the No. 17 team still needs a victory to make the postseason, all while teammate and owner Brad Keselowski has yet to score a top five this season, Buescher said the team has been making strides.

“For about three months now, I haven’t been able to wait to get to each and every racetrack,” he explained. “That’s where I feel like the company’s gotten to. I think that our results haven’t always showed it, because we’ve had some freak deals – we’ve been making highlight reels for all the wrong reasons: we’ve been upside-down, on fire, but we’ve been fast at those events before our misfortunes.”

The team did sweep the season-opening Bluegreen Vacations Duels at Daytona International Speedway, but in points competition haven’t been near the playoffs for most of the season.

“It’s not by accident, there’s been a lot of hard work that’s gone into it,” Buescher said. “We’re continuously trying to improve. Got a lot of speed for several months now, and we just haven’t put all the pieces together at the same time. So I think that’s what it’s about right now, it’s about cleaning up, execution. Hoping for a little bit of good luck, and if we can get all of that together, the speed’s there. We just have a tiny bit more to find, but some really good progress.”

Can Buescher find a way to make victory lane in the final two races?

“We’re ready to go,” he said. “Gonna do a lot of homework for the Glen and we’re gonna be ready to get after it.”