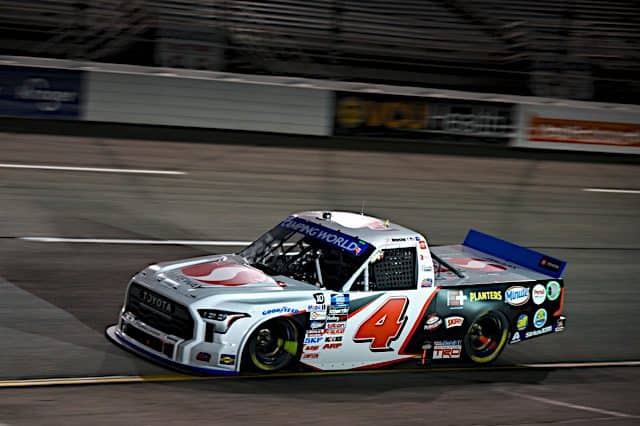 RICHMOND, Va. – Second, second, second. That is how close, yet so far John Hunter Nemechek came in both stages and the finish to the Worldwide Express 250 at Richmond Raceway (Aug. 13).

After starting in seventh, Nemechek quickly launched his No. 4 Safeway Toyota Tundra inside the top five. In stage one, he was chasing after ThorSport Racing rival Ty Majeski, who led all but one lap of the stage.

In a relatively calm race, that segment was a preview for him as to how the final stage would play out. Smith’s No. 18 ChargeMe Toyota stayed out front by a comfortable margin while Nemechek attempted to track him down. Regardless of Smith getting caught in lapped traffic, the 25-year-old was unable to slip by.

Nemechek nearly did pass Smith as the final stage waned. Smith caught lapped truck Layne Riggs, who nearly got turned off of turn 4 by Smith. That opened the door for Nemechek, who moved to the outside and made it three-wide. Unfortunately for him, the preferred line played to the advantage of Smith, who held serve.

The last ray of hope for Nemechek came when a caution flew on lap 216 when Carson Hocevar sent Nick Leitz into the wall. Unfortunately for him, Smith shut the door as quickly as it opened, sealing a KBM 1-2 finish with Nemechek in the runner-up spot.

“I don’t think I could have driven away from the [No.] 18,” Nemechek told Frontstretch after the race. “I did need that caution. Thanks to Carson [Hocevar]; just joking. I was catching the [No.] 18 on that long run. I think I managed my stuff a little bit better than he did and put myself in a really good spot to be able to catch him and pass him for the lead if it would have stayed green.”

After the Leitz incident, the short sprint did not help Nemechek, who acknowledged that wasn’t his strength.

“Even in practice, the [No.] 18 was better on the short run than we were,” he explained. “But we were way better on the long run. Just something that we know – In the end, it was a really good points night, big picture racing trying to advance to the next round. Yes, a win gets us there but if we couldn’t win the race, we did everything that we could. Second, second, second in all three stages isn’t terrible.”

It was indeed a strong points run from Nemechek, who scored 53 points on the day, only second to, once again, Smith. He locked up his 13th top-10 finish of 2022, second most in the series this year to Zane Smith.

The NASCAR Camping World Truck Series now takes a few weeks off until Kansas Speedway on Sept. 9, where two drivers will be eliminated from the playoffs. Nemechek sits fairly comfortably in the points, positioned in second with a 43-point advantage over the cut line.