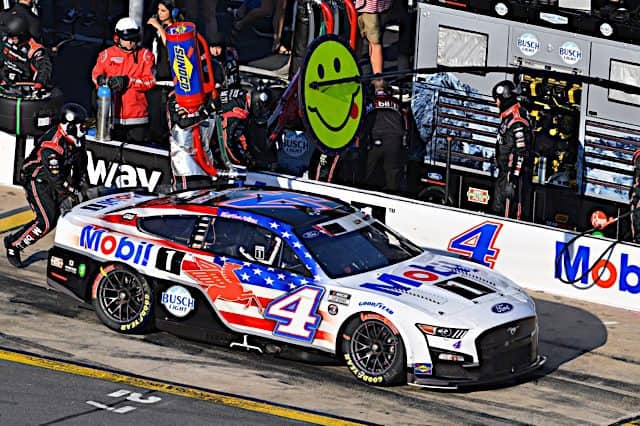 This Sunday (Aug. 14), Kevin Harvick became the first driver to win back-to-back NASCAR Cup Series races in the 2022 season, triumphant in the Federated Auto Parts 400. The 46-year-old held off charges from Christopher Bell and Chris Buescher in the closing laps at Richmond Raceway to win the 60th Cup race of his career.

With 17 winners in the regular season a distinct possibility, Harvick’s second win of the year guarantees him a spot in the playoffs with two weeks left to settle the lineup.

With Bell closing fast, Harvick won by just over four-tenths of a second. Had there been one lap more, the result might have been different; but, just like last week, the breaks are suddenly falling Stewart-Haas Racing’s way.

RETWEET to congratulate @KevinHarvick for WINNING at @RichmondRaceway! #NASCAR pic.twitter.com/6EEUOddSiC

“It’s like I said last week,” Harvick told NBC’s Marty Snider after burning it down in front of the grandstands for the second week running. “The cars have been running good week in and week out, and you see that we have a lot better understanding of what’s going on with how we adjusted on the car after the first run and were able to get our car handling a lot better … we’re just going to keep doing the things that we’re doing.”

When the green flag waved just past 3 p.m. ET, Ross Chastain jumped into the race lead from the outside pole as the pack went three-wide behind him. After a quick caution for Tyler Reddick’s spin, Chastain stretched out his advantage.

While drivers behind, including Bell and Kyle Busch wore out their tires running the outside lane, Chastain methodically paced the field for all 70 laps of stage one, even if old rival Denny Hamlin almost caught him in traffic at the very end. It was Chastain’s fifth stage win of the season.

Joey Logano jumped to Chastain’s outside on the restart to become only the second leader of the afternoon on lap 80. Logano would go on to lead a race-high 222 laps, becoming the dominant car throughout the middle of the afternoon.

The story of the stage was the battle for 16th. Ty Gibbs, in just his fourth race standing in for Kurt Busch in the 23XI Racing No. 45, got a little contact from Kyle Busch on the entrance to turn 1. Entering turn 3, the 19-year-old gave a bump to the 60-time race winner and passed him back. The two of them, Joe Gibbs Racing’s past and future, kept fighting side-by-side, lap after lap until Busch finally cleared the No. 45.

Normally this would be a brotherly battle.

Unfortunately, a mechanical issue put Gibbs behind the wall before the end of the stage. He finished 36th, dead last on the day.

Teams split tire strategy in the second stage, with Logano hitting pit road on lap 124 to front the two-stop strategy cars. Then, everyone else followed suit, with the exception of Ricky Stenhouse Jr., whose crew chief Brian Pattie called the No. 47 to a one-stop gamble.

But old tires, in Richmond, in August are a treacherous combination. On pit entry, Stenhouse got loose, driving over the commitment box and bouncing off Martin Truex Jr. before missing the pits entirely. To add insult to injury, Stenhouse was caught speeding, fully dooming the wild-card strategy.

Ricky Stenhouse Jr. gets into Martin Truex Jr. trying to get onto pit road. #NASCAR

With 60 to go in the stage, Hamlin was the first of the leaders to hit pit road a second time. This time, everyone followed suit within two laps. Logano maintained his lead, but a slow pit stop from Truex dropped the three-time Richmond winner off the lead lap.

Well, for 50 or so laps, anyway. With 11 to go in the stage, as Daniel Suarez blew past on new tires, Truex made the move stick on Logano, getting back on the lead lap before the end of stage two. Logano held on to win the stage, his third of the season.

Under the stage-end caution, Kyle Larson jumped to the lead with a fast pit stop, while Bell stayed out to take advantage of the wave-around.

Three-quarters of a lap after the restart, Bell’s crew chief Adam Stevens looked like a genius. Contact between Chastain and Busch on the entry to turn 3 triggered a multi-car pileup that collected Truex and Erik Jones, bringing out the fourth caution of the afternoon and putting Bell back on the lead lap with fresh Goodyears.

The cautions started to come faster, as no sooner had Logano jumped Larson for the lead than Bell spun on the exit of turn 4, bringing out a caution that saw lead-lap cars Hamlin, Blaney, Bubba Wallace and others pit. With differing tire strategies throughout the top 10, the three-wide action came thick and fast on the restart, but Logano was in clear air in front of it all.

See also
Up to Speed: Richmond NASCAR Speed is a Good Sign for Ford

As the final stage wore on, two strategies emerged. Logano and Kevin Harvick led the standard two-stop schedule, following Ryan Blaney down pit road around lap 295, while the Joe Gibbs Racing teammates of Hamlin, Bell and Truex held off until lap 305, giving the lead back over to Logano.

But Harvick was busy closing in. With 66 laps to go, Mr. Where-Did-He-Come-From took the lead for the first time all afternoon, flying by with Chris Buescher in hot pursuit.

Hitting pit road with 60 to go, Buescher short-pitted the No. 4 and No. 22 by one lap, leapfrogging Logano in the running to claim second place behind Harvick. From there, the RFK Racing driver started to reel in last week’s winner.

With 49 laps left, Hamlin was taken out of contention for the win when his crew dropped the jack before the left front tire was tightened. The extra four seconds that it took the No. 11 crew to jack the car back up and tighten the wheel allowed Bell to jump over Hamlin and take over as the leader of their alternate strategy. From there, Bell was able to close in fast on Buescher and Harvick.

On a typical Richmond long run to the finish, it was a straight-up chess match between the three of them over the final 48 laps.

In the end, it was difficulty putting 13th-place Wallace a lap down that decided the result. Harvick dispensed him with ease, and it took Buescher just long enough that the No. 17 fell into Bell’s clutches, leaving Harvick with just enough speed to hold off Bell to the checkered flag.

Buescher held on for a third-place finish, the best result for RFK Racing at Richmond since Carl Edwards’ win in 2013.

After scoring his best result since a runner-up finish at Sonoma, driver No. 17 said, “Everyone on our Fastenal Mustang did such a tremendous job overnight because we didn’t know we were in this position yesterday. I didn’t qualify real well, and everyone worked hard and had a fantastic race car today. I think it’s a little easy with this format to feel like third place doesn’t matter, but it’s nice to be close.”

Despite finishing lower, Blaney outscored Truex on stage points, meaning the No. 12 team extended its advantage over the No. 19 for the sole remaining playoff spot open on points. With just Watkins Glen International and Daytona International Speedway remaining, a new winner in either of those races could knock both Blaney and Truex out of the postseason completely.

With Kevin Harvick winning at @RichmondRaceway, now 10 drivers are LOCKED INTO the #NASCAR playoffs.

Here's a look at the leaderboard with just @WGI and @Daytona remaining in the regular season. pic.twitter.com/NZuatQ3xas

As it stands, Blaney is just 26 points ahead of Truex for the final playoff position with two races remaining. Next Sunday (Aug. 21), the penultimate race of the regular season sees the Cup Series take on the Watkins Glen International for the Go Bowling at the Glen, airing at 3 p.m. ET on USA.

Sure was nice of Marty to get back on the lead lap so Bubba could get the free pass. Bubba still finished a lap down.

If Marty winds up missing the final 10 event farce, is it possible for him to replace Kurt if he hasn’t recovered from his injury since NA$CAR is making up the ‘rules” as they go?

I still think Blaney is in trouble. Any bets against a Toyota taking him out to get Marty in?

Bell, Friesen and Ken Schrader will be raing in the Pinty’s series at Ohsweken Speedway dirt track near Hamilton on Tuesday night.

Should be “racing”, in real “race” cars.