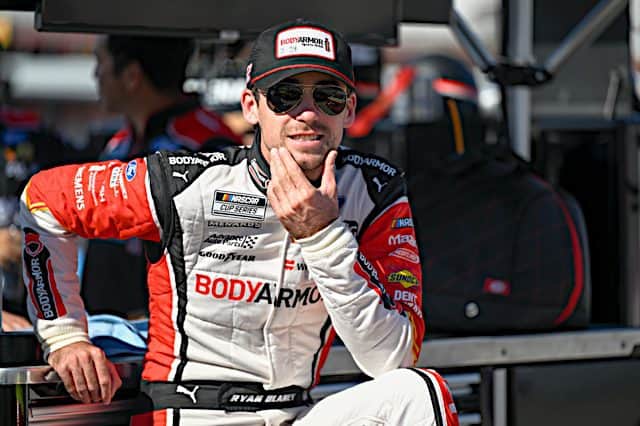 RICHMOND, Va. – 10th place doesn’t sound like much for Ryan Blaney, but it was enough to give him a little more breathing room as the NASCAR Cup Series playoffs approach.

Blaney entered the Federated Auto Parts 400 at Richmond Raceway Sunday afternoon (Aug. 14) second in the point standings. However, he was the last driver eligible on the playoff grid, as there have been 15 different winners this season. For now, only one driver who hasn’t won a race can make the 16-driver postseason field.

After Richmond, Blaney now leads Martin Truex Jr. by 26 points for that final spot, extending his lead by seven points. Truex actually finished three spots higher than the No. 12, but Blaney scored 10 more stage points. Truex finished stage one in 10th and stage two outside the top 10. By comparison, Blaney finished sixth and fifth in the two stages.

“It’s part of it, right? You have to understand we’re kind of racing him for the points a little bit,” Blaney said. “Not a little bit, but for the final spot if no one else wins. So you have to be aware of that and doing all you can.

“It was a good day for the stage points, getting more than he did and kind of stretching it a little bit. Just got to keep doing the same thing every weekend, I mean that’s all you can control.”

The top 10 marked Blaney’s third consecutive at Richmond, a track that used to be one of his worst. Blaney’s crew chief Jonathan Hassler stuck to the plan he entered the race with and didn’t try any huge gambles despite Denny Hamlin and Christopher Bell going with differing strategies from the rest of the leaders.

“Our strategy all weekend was to do a two-stopper [in the final stage],” Blaney said. “That was the game plan the whole time. But then it just depends on, do you short-pit it five laps or do you go a little bit longer by five laps? It seemed like the Nos. 11 and 20, they went long before they made their last stop and they had speed at the end of the race.

“A lot of that, too, is how your car is. If you’re holding on fairly decent then you run it a little bit long. No, that didn’t really affect our strategy at all. We had a plan and stuck to it.”

Another scenario that could’ve thrown a wrench in Blaney’s postseason was the potential for a new winner on Sunday. Chris Buescher came on late in the race and made a serious charge at eventual winner Kevin Harvick. Had Buescher scored his first win in six years, Blaney would no longer have a spot in the playoffs and would have to win one of the next two events.

Despite the tight points battle with Truex and the almost-scare from Buescher, the No. 12 team didn’t give their driver updates and instead let him focus on his own race.

Blaney now must hold off Truex and pray there are no new winners for two more weeks if he is to once again compete for a championship. Next week, Cup heads to Watkins Glen International, where Blaney finished a safe 14th last year. But he didn’t score any stage points in that race.

“You try to win yourself, especially at the Glen,” Blaney said. “People will be off strategy and off cycle. We kind of figure that [the strategy] out during the race. If you think you have a car to win, you could pit before the stages and try to cycle yourself out toward the front and give yourself a shot to win. If you don’t have a shot to win, maybe play the stage point game. Won’t know that until you get there.

“But yeah, just try to be consistent. Try to run top 10, toward the front, try to get stage points, try to win. It’s all we can do.”

After Watkins Glen, the regular season wraps up at Daytona International Speedway. Blaney is the defending winner of that race.

“Ryan Blaney Extends Cut Line Lead Over Martin Truex Jr., Avoids New Winner”
Exactly what did Ryan do to avoid there being a new winner?

Ryan is one I thought would be more successful than he has been. Granted, it’s not that he hasn’t done OK, but I thought he’d be winning and in the hunt for Championships more often than he is at this point in his career.

Unless we see a new winner at WGI or Daytona(which is VERY possible) I see Blaney pointing his way pretty easily. IMO, this is like the Playoff Cut Line “Battle” from last year where it was Reddick vs Dillon, where Reddick easily showed more speed all season and if it hadn’t been for a wreck late at Daytona, would’ve gotten in no problem instead of getting in by the skin of his teeth. However, with how unpredictable and crazy this year has been, there’s a good chance someone like a Mcdowell or Buescher could win at The Glen or a Bubba, Jones, or Almirola could win at Daytona. You could also have Blaney or Truex win at WGI and then see a Bubba, Almirola, or Buescher win Daytona and bump out Kurt or Briscoe based on reg season points.