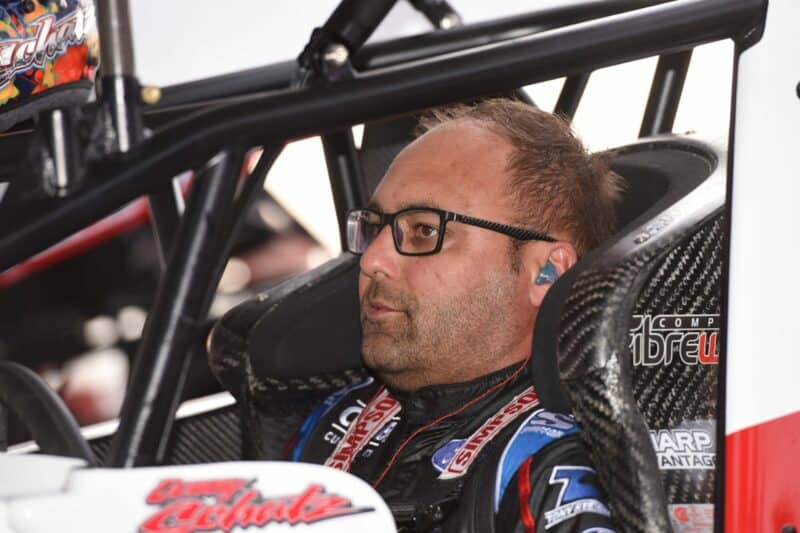 Using persistent drive on the low side of the track, Donny Schatz ate up a 1.5-second lead built by David Gravel after a lap 40 restart, making the pass for the race lead with five laps to go and driving off to score his 11th win in sprint car racing’s most prestigious race, putting him one behind the all-time record set by Steve Kinser.

Schatz’s victory put a silver lining on what proved an underwhelming on-track conclusion to the Knoxville Nationals. Saturday’s feature was marred by six yellow and two red flags over the course of 50 laps, including a violent crash on the opening lap of the race that sent driver Parker Price-Miller to the hospital for observation.

PPM was observed by fans at the track able to extricate himself from his racecar and was communicating with rescue personnel. (Edited to add update on his status as of this afternoon).

Polesitter Austin McCarl led the opening lap but was under immediate pressure from Tyler Courtney, who took the lead on lap 2 and would hold the point all the way to the race’s scheduled break at lap 26. After teams were allowed to change tires and make adjustments, Courtney would quickly lose the race lead to David Gravel on the ensuing restart.

Three yellow flags between laps 38 and 40 saw Gravel continually make hay on the restarts. But once the race went green after lap 40, Donny Schatz immediately began eating into the race lead, making the race-winning pass on the backstretch with five laps to go.

Defending Knoxville Nationals champion Kyle Larson ran in the top 10 early in the A-main after flying into Iowa from NASCAR Cup Series duties in Richmond, Va. He remained in that position before cutting down a right-rear tire on lap 13. Larson would battle back to finish sixth in the feature but never seriously challenged for the win.

2022 has been a much improved year for the 45-year-old Schatz, even if a title run that seemed inevitable after the Fargo, N.D. great won the season-opening Outlaws race at Volusia in February never materialized. Seeing Schatz strong the entire week at Knoxville, from finishing runner-up in last Sunday’s Capitani Classic to winning Saturday night’s feature, is a sure sign of progress in the Tony Stewart Racing camp and will be a worthy crown jewel for one of the all-time giants, even if another win doesn’t come this season. And his pre-race interview was truly T-shirt worthy.

Donny Schatz: "I didn't come rolling up with a walker here, did I?"

Answer to Wade Aunger's asking if Donny felt he could win tonight.

Shark Racing will be disappointed the one trophy they didn’t win at Knoxville was the big one, but they still turned the Knoxville Nationals into a feeding frenzy that lasted all week. Logan Schuchart won the Capitani Classic, the opening-night prelim feature Wednesday night and Saturday’s Last Chance Showdown, while Jacob Allen grabbed the trophy in Thursday night’s prelim feature. Coupled with both drivers also finishing top five in the A-main, this team sits well poised to defend their Jackson Nationals title from a year ago this weekend.

There are some who will argue that short of winning the A-main, Friday’s Hard Knox feature event is the hardest race to win at Knoxville. A shout-out goes to Rico Abreu for winning it for the second year in a row.

The Cinderella story of this year’s Knoxville Nationals goes to Iowa farmer Tasker Phillips, who not only qualified for the A-main for the first time in his career, but posted fast time in qualifying during Thursday night’s prelim program and made a blistering green-flag pass on Kyle Larson during the Last Chance Showdown that night.

JJ Hickle landed a local sponsorship from Knoxville Nuclear Medicine by having the businessman show up at his front door Saturday morning. His Knoxville Nationals A-main lasted one corner on the first lap, with his wing and new sponsor decals getting torn to shreds.

Corey Day seemed to have a lot of wasted speed in his car over the last 48 hours in Knoxville. Friday night saw Day drop from first to fifth early in the Hard Knox feature before spinning unassisted into the fence, then getting involved in another unassisted spin during Saturday night’s Last Chance Showdown. And while Day had a strong recovery during the Hard Knox feature, even that was under fire from fellow competitors:

He also passed the back half the field before the cone…. CC: @MHess51

Prior to the nasty PPM/Hickle incident in the A-main, Sawyer Phillips’s wreck on the opening lap of Saturday’s Last Chance Showdown was (fortunately) the first really nasty crash of the Nationals.

If there’s one driver that’s going to consider this year’s Nationals a missed opportunity, it’s Knoxville Raceway regular Brian Brown. A former track champion at the facility that has showed improved strength all season long, including at Eldora’s Kings Royal, under the leadership of new crew chief Danny Lasoski, Brown and the No. 21 team weren’t a factor in any of the week’s features, falling a lap down well short of halfway in Saturday’s feature.

Kasey Kahne scored top-10 finishes in both his preliminary feature on Thursday night and in Saturday’s Last Chance Showdown, but failed to transfer to the A-main.

Defending Cup Series champion Larson made plenty of moves on track at Knoxville, though never as close to the front as he’d have hoped. Larson won hard charger honors in Thursday night’s prelim feature, going from 22nd to fifth in 25 laps, then made a similar charge in Saturday’s A-main after suffering his flat tire. Larson’s failure to defend the Nationals crown continues a six-year streak of non-repeat winners.

Say a prayer for Parker Price-Miller. Truly a shame to see a driver that came back on all eight cylinders after fighting off cancer this spring have to endure another nasty scare.

Make. The. Knoxville. Nationals. A-main. Shorter. Scheduled race breaks are unnecessary and do nothing to heighten the stature of this event. I’ll wager my Frontstretch salary that the Nationals will still sell out with a 40-lap A-main that goes uninterrupted.

Remember when #KnoxvilleNationals used to be a sprint car race?

Logan Schuchart won Wednesday night’s preliminary feature and entered Saturday not locked into the Knoxville Nationals A-main. A-main polesitter Austin McCarl earned the pole despite finishing fifth in qualifying, fourth in a heat race and fourth in a feature. Seventeen of the top-20 qualifiers in Wednesday’s program had to start a B-main. Translation – there is not a single event in America with a more convoluted race format than the Knoxville Nationals. And they don’t even use passing points!

It’s Knoxville. It’s the biggest sprint car race on the planet. Use the freaking World of Outlaws rules and start heats straight-up after qualifying. The fact that teams have a preliminary night, Hard Knox night AND alphabet soup on Saturday leading up to the A-main provides ample opportunity for a Cinderella to break through without using ridiculous eight-car inverts on prelim nights.

Also, as much as I love single-car qualifying, and I do for premier classes, there is absolutely no point to it if there’s going to be an eight-car invert in each heat race as soon as it finishes. Getting through two hours of hot laps and qualifying that was ultimately negated by the heat race lineups during weeknight prelims did feel like a chore. And spare me the “they pay points for qualifying,” I don’t watch racing to do math.

The format’s not all bad. The Hard Knox program on Friday night really does have suspense to it. The real question is which was Friday’s tensest moment… the battle for the final transfer spots into the A-main, or the heated exchange between World of Outlaws officials and Hard Knox winner Abreu (read: NOS Energy vs. Rowdy Energy) over his victory lane headwear?

Yep, def wish there was a hot mic nearby for that interaction… and the stiff arm to delay the wing dance

I’m pretty sure this is standard practice for the Knoxville Nationals, but credit to the track officials for prohibiting the big transport rigs from parking in the infield, keeping both grandstands’ sightlines unencumbered. Considering dirt racing doesn’t do live pit stops, there’s no reason for any track in this day and age to utilize infield hauler parking that blocks sightlines.

If Brandon Wimmer’s team was trying to turn heads with their Knoxville paint scheme, mission accomplished. If Brandon Wimmer’s sponsor was actually trying to get airtime and exposure for their brand, mission failure. The car was illegible at speed… and even in the wrong light while parked.

For the first time since 2016, @BrandonWimmer is back at the #NOSvilleNationals!

The Fairmount, IN native has one A-Main start to his credit at Knoxville, finishing 17th in 2010. pic.twitter.com/fZQ72eGANC

It was pretty much on a repeat loop on the opening night of the Knoxville Nationals that the grandstand elevator was out on Wednesday night. Literally, of all the weekends?

So, about purses in open-wheel dirt racing…

Last place in the Knoxville Nationals A-Main pays the same as it does to win the Chili Bowl. 💀 https://t.co/SxsSRhRN0a

It’s disorienting as all get out to have “Sirius” playing in the background for driver intros only to have it muted every couple of drivers or so for an interview, then queued back up again. Do pre-race interviews before or after intros are done, but pick one or the other.

The good. DirtVision got WAY ahead of the ball this year, putting a banner on their website months in advance that the only way to watch the Knoxville Nationals was either through an annual subscription or pay-per-view. Anyone feigning outrage over that fact has been willfully ignorant. What’s more, DirtVision even made a tutorial video to explain how users of each app could find their Knoxville Nationals video purchases.

If anyone has a yearly subscription to Dirtvision they aren't using tonight you can slide into my DMs. 😂

The bad. That DirtVision had to make a freaking tutorial video for customers to find the biggest race of their streaming package on their respective apps. For all the progress DirtVision has made with their app since last year (it was right around Knoxville weekend a year ago that next-day video replay was made available), that the Knoxville Nationals is the most expensive program on the app and the hardest to find makes NO sense. Fan outrage got the USA Nationals moved off pay-per-view this year… come on folks, get up in arms. Make Knoxville easy to find.

The duo of World of Outlaws commentator Johnny Gibson and Knoxville Raceway PA announcer Tony Bokhoven worked very well with each in handing the action back and forth during on-track activity. But the amount of heavy breathing and lip smacking that was VERY audible on all four nights of DirtVision coverage when Bokhoven was not speaking was borderline painful. Call it picky, but DirtVision charges a premium for production value. Opening and closing mics is production 101.

@dirtvision do something with the constant breathing on your stream!!! It’s ruined the whole damn week. I’ve had to mute most the dang nights!! 👎🏻

Where it Rated (on a scale of one to six cans, with one a stinker and a six-pack an instant classic): We’ll give the weekend three-and-a-half plastic cups of whatever was on tap at Dingus last night. The crowd was huge, the spectacle great, but between PPM’s injury and an incident-filled race chock full of flat tires, only a Donny Schatz win made this year’s Knoxville Nationals A-main feel like a crown jewel.

Up Next: Tough call, as there’s two $50,000-to-win events going off this coming weekend, but Thinkin’ Dirty is heading back on tour with the Lucas Oil Late Model Dirt Series for the annual Topless 100 at the Batesville Motor Speedway in Arkansas. Coverage can be found on Flo Racing.