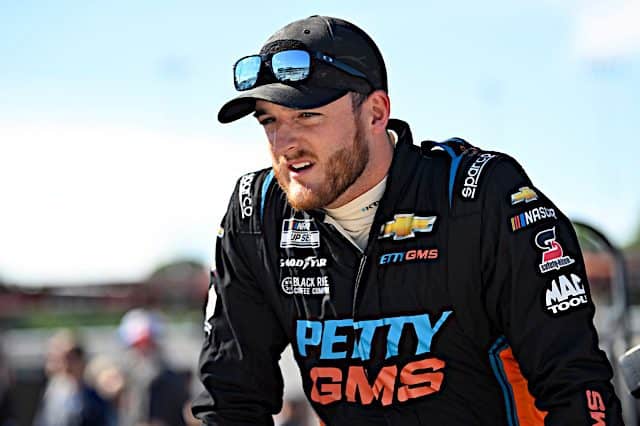 Ty Dillon’s Petty GMS Motorsports teammate Erik Jones has been the superlative driver at the team in 2022, but at Richmond Raceway’s Federated Auto Parts 400 (Aug. 14) it was Dillon who stood out among the underdogs.

Richmond is a track that is typically not kind to underdogs, as several races over the past decade featured long green flag runs and slippery conditions. Conditions like that limit how many changes can be made to a car’s setup with little time for extended adjustments during green flag stops. As has become the norm, if you miss it on the setup, you are in for a long day.

Dillon was about the only one to make some positive noise, earning a 17th-place finish as the lone underdog to place inside the top 20.

One of the more welcoming sights during the race was that the top lane rubbered in, allowing drivers more options in lanes on the track. Dillon was one to use it to his advantage, running the top groove for a large part of the race.

The No. 42 Allegiant Chevrolet slowly lurked through the field in stage one, finishing in 20th. Stage two saw Dillon raise some eyebrows, as he drove up into the top 15 and finished the stage in 12th. What may have been just as impressive was the fact that he stayed on the lead lap. Only 14 drivers were on that same lap when stage two ended.

Despite the car tightening up in the final stage, he held serve in the top 15. However, one of the most crucial factors at Richmond is avoiding mistakes. Dillon fell victim to one on lap 295, as he was hit with a commitment line violation during a green flag stop.

If there was a silver lining in the penalty, it was the fact that several drivers were either one lap down or multiple laps down at the time. It allowed Dillon to stay within the top 20 for the second straight race (he finished 14th at Michigan International Speedway last weekend).

We already knew Dillon won’t return to the No. 42 next season, but following last week’s announcement that Noah Gragson will replace him, Dillon’s runs the last two weeks are just what the soon-to-be free agent needed. Following a July that featured three DNFs, back-to-back top 20s is surely a better audition for another ride in 2023.

Justin Haley was the next underdog in line with a 21st-place finish. Haley’s weekend started out on a rough note when his No. 31 LeafFilter Chevrolet failed pre-qualifying inspection twice. That resulted in him losing his pit selection and car chief.

In the race, the long green flag runs did not help Haley, who was mired outside the top 20 for most of the day battling a tight-handling race car. He finally entered the top 20 in the final stage, running in 19th for several laps. The 23-year-old faded toward the end, resulting in the 21st-place run.

If you flashback to the 2019 fall race at Richmond, you may recall one of the biggest storylines of the race being Ricky Stenhouse Jr. turning race leader Martin Truex Jr. in turn 4. Fast forward to 2022 and a similar incident occurred. In stage two, most drivers opted to pit twice with the value of fresh tires on the worn-out surface. However, Stenhouse’s team made the call to try it on one stop. Unfortunately, Stenhouse’s scheduled stop didn’t work out as planned.

Stenhouse missed the pit entry, hitting the apron too fast and causing him to slide up. That led to him making contact with Truex, though it did not cut a tire. To make matters worse, Stenhouse was hit with a commitment line violation, effectively ruining his strategy and arguably a strong finish. It was a tough blow for a driver who seemed to be one of the best at working the top lane.

Gragson made his first Cup start since the announcement that he would be graduating to the series full time in 2023. He had a quiet, uneventful day, for the most part, resulting in a 24th-place finish.

Corey LaJoie’s three-race top-20 streak came to an end with a 28th-place showing. LaJoie looked like a pinball a couple of times, tangling with Cody Ware right off the bat on lap 1. Near the end of the first stage, he received an aggressive tap from Ryan Blaney, who was battling Joey Logano for the sixth position.

A look at what happened at the end of lap 1 between @CodyShaneWare and @CoreyLaJoie.

Looks like the No. 51 was already loose exiting turn 4 and slid down into LaJoie. Neither spun, but things are chaotic already at @RichmondRaceway.#NASCAR #FederatedAutoParts400 pic.twitter.com/t9yzUPmZVw

Only two cars retired from the race. Unfortunately for this column, one was an underdog. Jones showed top-10 speed during the weekend but struggled to find the right formula during the race. It came to a sudden end at the beginning of the final stage when Jones was involved in an accident between Ross Chastain and Kyle Busch.

The damage destroyed the right front of the car and ended Jones’s day in the process, relegating him to 35th.

Ty Dillon (17th): “Certainly happy with our speed today in our Allegiant Camaro. That was a major step in the right direction and overall competitiveness. We had some messy things that we need to clean up, but it’s good to be disappointed with 17th after the penalty and having a messy day. I think our momentum is heading in the right direction and we are hitting our stride here. We have 11 races to go to really perform well.”

Justin Haley (21st): “Our No.31 LeafFilter Gutter Protection Camaro had speed all weekend and was a top-10 car in practice. Our qualifying effort didn’t show it, but we knew we had a solid car for the race. The speed carried over to the race, and we had good pit stops throughout the race, which got us some decent track position. Overall, I’m proud of our guys for a solid P21 finish. We are looking forward to Watkins Glen, a road course I really enjoy!”

Noah Gragson (24th): “We battled all day with our Chevy Accessories Camaro. We could never just get it fine-tuned. The guys worked really hard, and we had great pit stops. We just kind of missed it overall, but I’m still proud of the effort. We will keep working hard and try to be better next time.”

Erik Jones (35th): “We were just in the wrong spot and got caught in someone else’s mess. We made contact and killed the right front. We struggled all day with our FOCUSfactor Chevy, just couldn’t find the balance we needed to run up front. Not our day. We’ll load up and get ready for Watkins Glen next weekend.”

Michael McDowell (29th) also caught up with Frontstretch at Richmond and discussed how aggressive he would be heading to Watkins Glen International and Daytona International Speedway.

“The road courses have been strong for us this year,” McDowell said. “This Next Gen car has helped us close the gap to the front runners. We’ve had a top five car at all the road courses I feel like so far this year. That’s fast enough to put ourselves in a position to try and win at Watkins Glen. We’ll be aggressive on strategy, aggressive on restarts trying to get as much as we can. Road courses are such tough places to get wins at because so much can happen on those final restarts like we saw at [Indianapolis road course]. Just have to put yourself in position and see what happens.”

After being on the car at Michigan International Speedway, Blaster returned with Live Fast Motorsports in the Commonwealth. This scheme was an absolute beauty to see in person as BJ McLeod wheeled the No. 78 Blaster Ford to a 33rd-place result.

Thank you @BlasterProducts for your support last week at @MISpeedway and throughout this week! We can’t wait to welcome you back at @TooToughToTame 👋🏼#NASCAR pic.twitter.com/CSJtrXn4uq