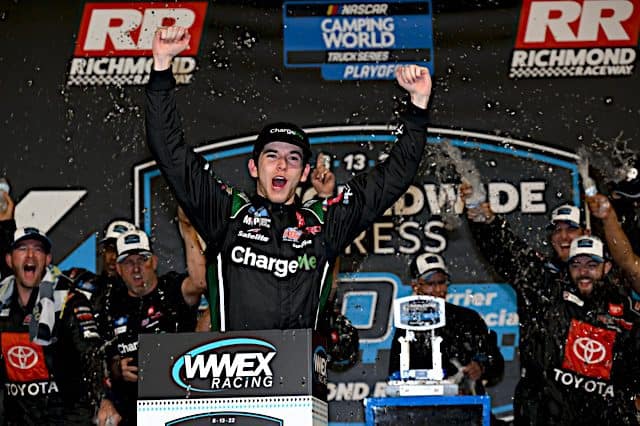 Chandler Smith put on an absolute clinic at Richmond Raceway on Saturday, Aug. 13, leading 176 of the 250 laps en route to an easy win. His third NASCAR Camping World Truck Series victory of the season also punched his ticket into the Round of 8.

This race was relatively calm compared to the first playoff race at Lucas Oil Indianapolis Raceway Park, which saw Enfinger take the win in a classic overtime ending. At Richmond, there was only one caution for an incident outside of stage breaks, but Smith was able to hold off Nemechek and pick up his third win of the season.

Majeski won the pole earlier in the day and showed he had race-winning speed, dominating stage one and getting another playoff point. He ended up leading 73 laps on the night, the second most out of the three lap leaders (Nemechek also led one circuit).

But a scary pit stop cost Majeski precious track position, a mistake from which he could never recover. Majeski was pulling into his pit box when his jackman, Paul Steele, fell right into his path as he was jumping off the wall to service the truck. Majeski slammed the brakes but still hit Steele. However, the incident could have been a lot worse if it were not for Majeski’s quick actions to evade his crewman.

Incredible by jackman Paul Steele to still finish @TyMajeski's stop after this. pic.twitter.com/WETHtNQkjQ

The setback dropped Majeski far down the running order; the lack of cautions left him in too deep a hole to contend up front. Despite climbing back to third, experiencing a solid points day, Richmond seems like a race the winless Majeski would like to have back.

Despite some playoff drivers having a good day, others struggled to find speed. Ben Rhodes was the worst finishing of the 10, winding up two laps down in 18th. Rhodes struggled the entire night with brake issues.

Another driver who found himself in trouble was Carson Hocevar. Remember that one caution for an incident I mentioned earlier? That came courtesy of Hocevar running into the back of lapped truck Nick Leitz, sending the latter hard into the outside wall and leaving Leitz as the only truck to not finish the race.

While Hocevar still wound up 10th, Leitz was not too happy with the move.

Does the Championship Run through Chandler Smith?

The win for Smith is his second in three races – he also won the regular season finale at Pocono Raceway. With the No. 18 peaking at the right time and riding all the momentum into the next round, is he the championship favorite?

“I’ll leave that to you guys,” Smith told FOX Sports 1. “Like I said at media day, if the good Lord wants it to be our championship, it will. If it’s not, it’s not. But I like how everything’s going right now, for sure.”

Smith and Kyle Busch Motorsports sure seem to have everything going their way right now. Both he and teammate John Hunter Nemechek have combined to lead 265 laps thus far in the postseason.

With just one race left in the Round of 10, six spots remain up for grabs with Enfinger and Smith locking themselves in with victories. Matt Crafton holds the eighth and final spot by three points over Hocevar and six points over Christian Eckes.

Everyone else is at least 21 points over the cut line. But if Hocevar or Eckes end up winning next week, no one is really safe, so drivers cannot afford a bad day.

Heim continues to open up his lead in the Rookie of the Year standings, finishing fifth, but Taylor Gray rebounded from a heartbreaking night at Lucas Oil IRP to finish right behind Heim in sixth. Gray started 24th on the night, making him my Rookie of the Race.

The Round of 10 for the NASCAR Camping World Truck Series concludes at Kansas Speedway in almost one month’s time. After a long break, the series returns on Saturday, Sept. 9 at 7:30 p.m. ET for the Wise Power 200 on the 1.5-mile oval. Television coverage will be provided by FOX Sports 1.

Funny how they try to build up Hailie Deagan during q show.