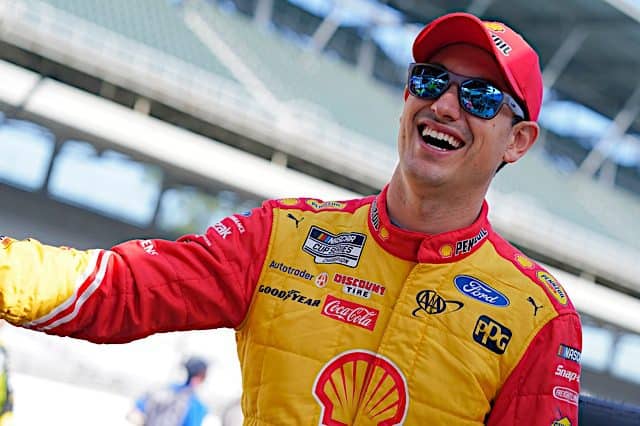 Suffice it to say, Kevin Harvick hasn’t lost his touch. One week ago, Harvick scored a victory at Michigan International Speedway, his first NASCAR Cup Series win in nearly two years. Fast forward seven days and Harvick found himself in victory lane again, this time at Richmond Raceway. His second win of 2022, and 60th career Cup Series victory, locked him into the playoffs and left him an outside shot at the number two overall seed.

That seems almost impossible to believe when compared to where Harvick was a short time ago. But the No. 4 team, along with Ford, has suddenly turned their season around in a big way.

Harvick was far from the only Ford driver who surprisingly showed a lot of speed at Richmond. In fact, several Ford teams flexed a lot of muscle in Sunday’s race.

Joey Logano had the fastest car for most of the afternoon, leading 222 laps. Chris Buescher emerged as one of Harvick’s biggest challengers during the final green flag run. Aric Almirola started deep in the field but steadily marched his way into the top 10 by halfway. Chase Briscoe raced his way into the top five before a bizarre cockpit fire ruined the No. 14 team’s afternoon.

Although its drivers’ fortunes may have varied, Ford sure came to play at Richmond.

It’s a surprise considering the Blue Oval crowd has not had the best of seasons in 2022. Until Harvick’s back-to-back performance, Ford only had four Cup Series wins: Austin Cindric in the Daytona 500, Briscoe at Phoenix Raceway, and two from Logano, coming at Darlington Raceway and World Wide Technology Raceway (Gateway).

Wins at Daytona and Darlington are among the biggest in the sport, but Ford’s victories at flat tracks like Richmond, Gateway and especially Phoenix may prove more significant for the championship battle. Phoenix is set to host the championship race this year for the third time. If Ford can get even one of its drivers into the final round of the playoffs, they may wind up with the upper hand on the competition.

At this time, Harvick and Logano are locked into the postseason on the strength of multiple wins.  Cindric and Briscoe are also very likely playoff bound. There are still possible scenarios where either driver could miss the cut, but a repeat winner at Watkins Glen International next week would lock them both into the postseason.

Ryan Blaney, who placed 10th at Richmond, is still on the bubble and is the only competitor in position to qualify for the playoffs on points. Any other Ford driver would have to win during the next two weeks to reach the postseason; however, they would displace Blaney to do so.

For the sake of argument, we’ll assume Blaney holds on and clinches his playoff spot in the next two weeks. Among Blaney, Harvick, Logano, Briscoe and Cindric, who would be Ford’s biggest threat not just to reach, but also to win, Phoenix?

From that list, Cindric and Briscoe feel like longshots. Cindric has put together an admirable rookie season, especially over the last two months. But he has not yet cracked the formula for consistent speed at flat tracks. The No. 2 team had to fight hard to finish 12th at Richmond, where Cindric lacked the pace of Logano and Blaney, his cohorts at Penske.

Briscoe, meanwhile, could pull off another strong run at Phoenix after winning there in March. Yet even if that happens, it’s unlikely he will still be in the championship picture come November. Closing out races has been a big problem for the No. 14 team, which has not posted a top-10 finish since the Coca-Cola 600.

Sunday’s race was Briscoe’s best chance to break that drought, but his day literally went up in smoke when he had to return to the pits to get that fire extinguished.

He's now two laps down after having to pull down pit road for his crew to put out a fire. #NASCAR pic.twitter.com/4bnmljx0jn

Whether it’s inexperience, bad strategy, or freak occurrences, it feels like something gets in the way of Briscoe and his team maximizing their potential almost every week. That won’t fly in the playoffs.

As for Blaney, he and the No. 12 team remain a huge wildcard. Still second in overall points, Blaney could make a deep run if he gets into the postseason. He led 143 laps and scored a top-five finish at Phoenix in March, tacking on top fives at Gateway and Martinsville Speedway. But with only a 26-point gap on Martin Truex Jr., Blaney’s playoff future is still to be determined.

That leaves Logano and Harvick as the most likely Ford drivers who can both reach the championship race and contend for the title. Between the two of them, Logano remains the slight favorite. His summer has been pretty rough since the Gateway win, but three finishes of sixth or better in the last three races suggest the No. 22 team is picking up speed. Logano also posted a top 10 at Phoenix and nearly won Martinsville earlier this year. Perhaps momentum is starting to swing in Team Penske’s direction.

But Harvick is not to be underestimated. His track record of success in the playoffs is as good as anyone’s, including Logano’s. And while winning at Michigan seems to be a yearly occurrence for Harvick and the No. 4 team, Richmond wins have not come so easily. Indeed, Sunday’s victory was the first time Harvick won at Richmond while driving for Stewart-Haas Racing.

The difference between those two tracks cannot be understated. If Harvick can win at a predominately aero and horsepower oval like Michigan and a short track like Richmond, where grip and handling are most important, it is a sign that the No. 4 team has regained its ability to run up front. That could be bad news for the competition, especially considering his dominant track record at Phoenix (nine career wins are a NASCAR best).

In short, Ford is by no means out of the title picture. The Blue Oval will be well represented in the playoffs while its drivers could be the ones to beat at Phoenix and other flat tracks. Cindric and Briscoe have flashed considerable potential this year, while Blaney clearly has some unfinished business to settle. But the last month has showed us it is going to be the veterans, namely Logano and Harvick, who will carry the banner for Ford through the playoffs and potentially into the Championship 4.

Don’t worry chevy fans, hendricknascar will tweak their aero/horsepower package rules just in time for another hendrick/chevy championship. Then we can listen the whole off-season about how great they were and how hard they worked !

LOL. Even when the Fords win back to back races, the only comment you can make is about how it’s fixed. Just once it would be nice for you to add something to the conversation that is relevant to the race but I guess you can only handle one thought at a time. .
What does it say about you if you know something is fixed and you keep wasting your time watching it?

Very good you can count, but you still didn’t answer the question. Why do you keep watching if you know it’s fixed?

Its entertainment value is comparable to WWF wrestling – WWWUUUHHH ! ! (Compliments of the Nature Boy).