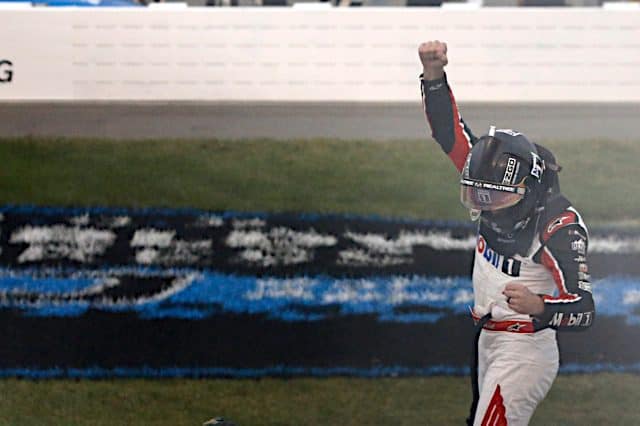 1. Maybe Kevin Harvick should reconsider retiring after next season

The NASCAR TV announcers, and particularly the FOX Sports crew that handles the first half of every season, love to remind us that among his handful of nicknames, Kevin Harvick is known as “The Closer.”

He earned that nickname for being the kind of performer who knows how to be at his best late in races, pouncing when it matters most to get victories. You’d hardly know it early this season, since Harvick, and really all of Stewart-Haas Racing, were non-factors most weeks.

But the Harvick and his No. 4 team have taken the idea of “finding something” to its logical extreme, winning back-to-back races at two very different kinds of tracks: Michigan and Richmond. To say it came out of nowhere is a bit of an understatement; along with since late in the 2020 season, Harvick’s previous two finishes before the victories were 27th and 33rd.

Before these wins, Harvick seemed a bit like late-career Jimmie Johnson, looking like he just lost the plot. Maybe the Next Gen car didn’t suit his driving style (though to be fair, his winless streak pre-dated the new vehicle) and he was just going to be competing for top 10s until he retired next year.

But all of a sudden, Harvick is a championship contender by virtue of those two victories (we’ll get back to that shortly). Which begs the question: Should Harvick reconsider calling it a career after 2023?

If he has his mind made up that his heart simply isn’t in for the weekly grind, then that’s something of a rhetorical question. The fact of the matter is that he’s proven he isn’t just running laps, but still very much in the hunt for more victories, and perhaps, even more championships.

In other words, he’s looking a bit more late-career Mark Martin than JJ. That’s something you figure would at least give him some pause when he ponders his post-2023 plans.

2. Should a Cup Series championship be decided by who gets hot down the stretch?

Harvick’s sudden resurgence has highlighted a real weakness with the current system that decides who wins the NASCAR championship. It’s possible for a driver to more or less sleepwalk through almost the entire regular season, win a few races and be very much alive to win the title.

Two things to note: First of all, this isn’t suggesting that the No. 4 team was taking it easy (in fact it was certainly quite the opposite), just pointing out that one could do that. Second, Harvick is hardly the only driver to come alive in the late summer and then be an instant championship contender when the playoffs begin.

It’s also true that the stick-and-ball sports championships are occasionally won by teams that get hot late — think any time a wild card wins it all. But there’s a big difference too, because while you don’t have to be the best team to be in most playoffs, you have to be at least somewhat consistently good. In MLB, for example, you need to be a division winner or one of the next three best teams, even with the expansion of the playoffs this season.

In the NASCAR Cup Series? Not so much. It’s quite possible to win one race, say, in August, and have that be enough to make the playoffs. A driver could be 20th in points, have like one top-five finish, make the postseason and then turn it on from there.

This isn’t a new observation by any means, but it’s relevant again because of Harvick and gets to the question of whether the NASCAR Playoffs are rewarding the right thing. Wins? Sure, and that’s a good thing. But definitely not consistently good performances, and that’s inescapable under the current system.

3. Ryan Blaney and Martin Truex Jr. dodged a bullet, now they may have to settle things among themselves

For a while at Richmond, it appeared Chris Buescher may have had a car capable of winning. That would have been fantastic for the No 17 team, currently on the outside looking in at the playoff field.

It would have been disastrous for Ryan Blaney and Martin Truex Jr., the two drivers fighting for a single spot in the postseason on points. They’ll have two more races to be nervous about another first-time winner emerging, with some real apprehension at both since they’re Watkins Glen and Daytona.

In the meantime, they’ll be battling each other, with each point a valuable one. Blaney has a nice leg up, as a 26-point lead is a big one with just two races left. If he doesn’t have a finish of 30th or worse, Truex might be out of luck.

If Truex were to make a move, it’s probably going to have to be at the Glen, where he somewhat surprisingly was good even before he joined his current organization. He’s even won there in the past, which would make this whole thing moot.

Maybe that’s exactly what he needs to do. Because if it gets to Daytona and still trails … well, it’s hard to count on things going exactly right for you there.

Autoweek cited an RCR insider in a report this weekend that Childress is still “furious” about Reddick’s upcoming departure. The question now is whether he’d be mad enough to jettison Reddick a year early, cutting him loose at the end of the 2022 season.

That’s exactly cutting off your nose to spite your face, because RCR knows it’s not building toward any kind of future with Reddick, where it could be with Austin Hill, rumored to be the next man up for the No. ride. But for an organization as starved for success as Childress’ has been in recent years, it’s no small thing to intentionally take a step backward, and would prove Reddick has scorched the Earth pretty badly indeed.

5. Are Kimi Raikkonen and the Cup Series ready for each other?

One of the more fascinating late season subplots has been former Formula 1 champion Kimi Raikkonen preparing for his NASCAR Cup Series debut. While no one is expecting him to just jump in a stock car and win, the fact that he’s in a Trackhouse Racing Team car is raising expectations a bit, considering both of their regular drivers have victories in 2022.

What will the hardest adjustment Raikkonen will have to make? NASCAR-style pit stops will be tricky, for sure, but Daniel Suarez thinks the raw aggression of Cup Series drivers will be the thing that gives him the most pause.

Regardless, it should add a little bit of extra intrigue to the Glen in an already interesting penultimate regular season race, and that’s always welcome.

I take issue with you saying that 4 team hasn’t done well all year. 3rd-best average finish!

I don’t know why you are worried about a scenario where someone gets hot at the end of the season. The bigger farce with the current format is that someone can be pretty much locked into the playoffs by winning the first race of the year.

No I don’t think the championship should be decided the way it currently is. Go back to a full season set of results, not the crapshoot.

If NASCAR officials actually listened and didn’t spout really dumb
bull then what they would realize is the fans do not like the current
product which has been said the last how many years but it goes
ignored by the suits in exec land.

Childress could have, should have, signed Reddick instead of messing around clueless. I don’t think Reddick cares what Childress thinks, his future is set.

As for Point 2 with the Championship and Harvick – look at 2020. I’d say something is wrong.