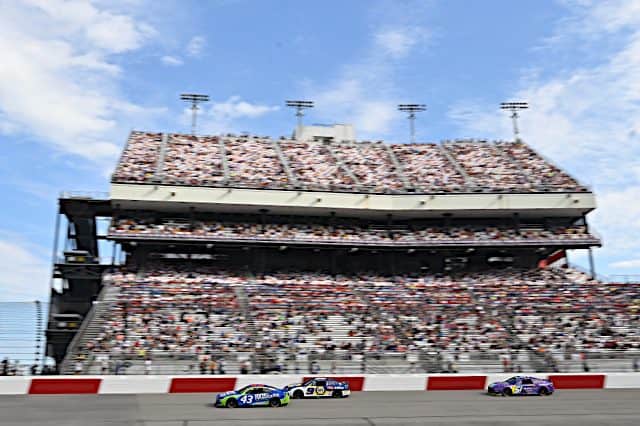 Richmond is at a crossroads as far as the NASCAR Cup Series goes. Last year, the September race had the second lowest TV rating of any Cup race run in its scheduled time slot. The only one rated lower was the Saturday race at Pocono, which got cut from the schedule. In order to remedy this, NASCAR moved the race up a month to get it out of football season and made it a day race. Problem is, Richmond can be toasty in August.

This was a strategy-filled event. When you took your tires was key. If you waited too long to pit, you likely compromised your race, like Ricky Stenhouse Jr. Speaking of that, I’m a little confused over that mess. He was announced on-air as having received a speeding penalty on his green-flag stop. However, when he tried to pit the first time and understeered into Martin Truex Jr., he ran over the orange box in the process. I thought that would have been a commitment line violation. If he had sped on pit road as well when he did stop, wouldn’t the second penalty have converted his drive-through penalty to a stop-and-go?

As compared to last year, you had a race with fewer lead changes, but you had more passes in general. That resulted in a good amount of action for position during the race. USA did a pretty good job in showing those battles, likely better than last fall. There was a bunch of split-screen coverage in order to show multiple battles on-track. In addition, there were multiple “Through the Field” segments during the broadcast as well, something that really hasn’t happened in a while. It was nice to see.

I found the overall product to be quite good, but also polarizing. As noted above, this used to be a night race. It will take a lot of getting used to for Richmond to not have a Cup race at night. Heck, after all of Richmond’s Cup races being scheduled for Saturday nights for nearly 20 years, having a day race there has been a novelty in recent years.

Racing in the daytime opens up a wider racetrack for action as the track becomes rather slippery with direct sunlight. Even when it clouded up, the groove was still pretty wide. That action seemed to satisfy Dale Earnhardt Jr.

Man it was so good to see drivers using the entire track today @RichmondRaceway. Multiple grooves. That’s the best version of Richmond. The only version for me.

Did I enjoy the on-track product? Sure. It’s an extension of what we saw back in April, although I think it was warmer back then. According to loop data, Sunday’s race had more passing than the spring race.

Speaking of Earnhardt Jr., he seems to have permanently decided to refer to Chris Buescher as Christopher. This caught the attention of NASCARcasm on Twitter.

Folks, @DaleJr can call him "Christopher Buescher" if he wants. He'll start going by "Christopher" within a week, guaranteed. Dale wields that much power. Dale could start calling me "Bedwetter McLadyparts" and I'd get my drivers' license changed. #NASCAR

I don’t think Earnhardt Jr. has quite that much power, but he is a trendsetter in NASCAR, more than anyone else at the moment.

The one aspect of the broadcast that I didn’t really like that is that they really didn’t go a good job in showing how quickly Christopher Bell and Denny Hamlin were running down the leaders late. It seemed like it was nearly a foregone conclusion that Kevin Harvick was going to win, but Bell was right there in the closing laps. Had Hamlin not lost four seconds on his final stop, he would have been there as well.

In addition, I was a little confused as to how drivers like Daniel Suarez fell off the lead lap. He seemed to have a decent car for a good chunk of the day, but ended up two laps down before getting one back the old-fashioned way late in the race. There was no real mention as to what happened. I suppose he was far enough out to lunch that he got that far back on his own.

Finally, NBC Sports has updated its tire life graphic that debuted at Indianapolis a couple of weeks ago. The Indianapolis graphic only had red and green colors on it. What was seen Sunday was a lot more detailed and included the number of laps on the tires for each driver. I liked that and it should be used more going forward, especially at a place like Darlington.

Prior to the race, a piece aired on Kolby Garrison, a race fan that was at Richmond as a guest of NBC Sports. She is completely blind and experiences NASCAR almost solely through her other senses. She is part of a new piece that will be on NASCAR’s YouTube channel called Vivid: The Perspective of a Blind NASCAR Fan, which will premiere Wednesday.

Kolby Garrison is a lifelong NASCAR fan who is blind.

Jeff Burton took her out for a ride around Richmond Raceway and learned what it truly means to make live sports broadcasting accessible for all.

Garrison got to take a ride-along with Jeff Burton in the NBC Sports two-seater. Normally, these two-seater segments are designed to either inform fans of certain things, or to scare the pants off of whoever is in the seat. Here, Burton allowed Garrison to describe her experience in the car and what she was feeling.

I found this to be truly interesting. While my eyesight is not the best, I can see things. Garrison can’t, and thus has a completely different experience in life. Without sight, everything else has to compensate.

Speaking of the Burtons, Richmond is one of their home races (I think South Boston is actually closer to Martinsville, but Martinsville is the penultimate race of the season and NBC Sports will be distracted by then). Here, you saw Harrison and Jeb Burton talking about what growing up in Virginia meant to them.  However, the focus on the piece was Ward Burton (Jeb’s father and Harrison’s uncle), who is heavily into his work with the Ward Burton Wildlife Foundation these days. Today, the WBWF is helping to fund “comradeship” activities for military members on the foundation’s 900-acre farm.

Sunday’s race finished right about on schedule. As a result, there was a decent amount of post-race content for viewers to take in. The NASCAR America Post-Race show is where we saw Kyle Busch explained that he got “Chastained” out there, for example.

The biggest takeaway I had was Kevin Harvick’s analysis of his race. As we’ve seen over the years in his analyst work for FOX Sports 1, Harvick is one of the most analytical drivers in the garage. He’s very knowledgeable and can be quite detailed when it comes to explaining things.

Unfortunately, he’s also quite mercurial at times. You only really get this kind of content from him if he’s in a good mood. If he finished fifth on Sunday, you might have gotten a quick paragraph from him and that’s about it.

Overall, Sunday’s race was a pretty exciting race to watch. There was some good action to be had. If you were there, you likely enjoyed the race as there was seemingly something for everyone … except those that like a lot of wrecks, since there weren’t many of those on offer. As I stated last week, I stress the importance of inclusiveness on broadcasts. That way, we can keep better tabs on teams if something goes down.

That’s all for this week. Next weekend will be a pretty busy weekend. The NASCAR Cup and NASCAR Xfinity Series will be at Watkins Glen to take on the country’s fastest road course. They’ll be joined by the ARCA Menards Series on Friday. Those teams will also have to haul to Illinois to race Sunday afternoon on the Springfield Mile.

The NTT IndyCar Series will be back in action at World Wide Technology Raceway in Illinois with Road to Indy series on the undercard. Finally, SRO America will be at Road America. TV Listings can be found here.

For next week’s edition of Couch Potato Tuesday, we’ll cover some of the Watkins Glen action. It should be really interesting.  I’m looking forward to it. The Critic’s Annex in the Frontstretch Newsletter will cover Saturday night’s Worldwide Express 250 for the NASCAR Camping World Truck Series, where Chandler Smith kicked tail and Natalie Decker had some thoughts.

i enjoyed the piece about kolby garrison. made me wonder how many visually impaired fans nascar has.

i missed richmond being a night race.

onto watkins glen. be real interesting to see how that plays out.

It was a good race and it was refreshing that NASCAR didn’t fabricate a caution late and let the different strategies play out. The radio did a much better job of Bell’s late-race charge than TV. So those watching and listening knew about it.
The Kolby Garrison segment should make us all pause and see someone who is a true fan and experiences things at a race we could never imagine. She is an inspiration.
The Kyle Bush interview at the end was pretty good. The new “verb” will stick for a while. He was also very retrospective and funny.
It was a good day for the Sport.

i liked the kyle busch segment with gigi

I think NBC could use at least one baritone in the booth. It would help to sooth my old ears from the high pitched tenors

They need a Pat Summerall. And the current screechers sound like out-of-control sopranos.

I watch all of the truck races and it seams that Waltrip and Parsons are PR men for KBR.