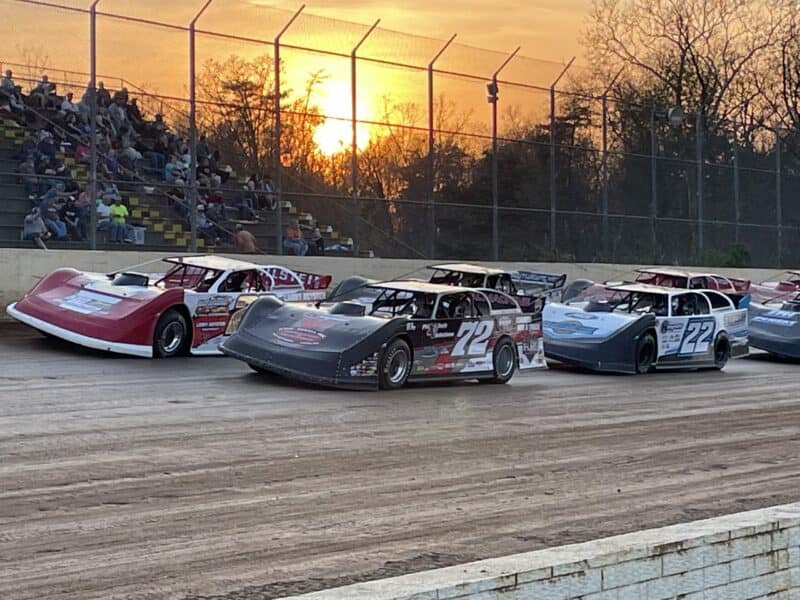 Somewhat muffled behind all the hype surrounding the Knoxville Nationals this past weekend was a crown jewel event for the super late model ranks as well, with the annual North/South 100 going off at the Florence Speedway in Kentucky. And again, it was Superman Jonathan Davenport cashing the big check, leading all 100 laps to score a $75,000 payday, adding to what will go down as an all-time record season for dirt racing winnings for the Georgian.

The crowd at Florence was huge and the field of cars deep, but the problem remains that Davenport’s win marked the third 100-lap crown jewel race in the last month that has seen the race winner lead all 100 laps. Davenport also wired the USA Nationals feature at Cedar Lake two weekends ago, while Brandon Sheppard led all 100 laps of the Prairie Dirt Classic at Fairbury last month.

Speculation on the dominance being seen at the front of super late model races has focused in on the “droop rule,” the centerpiece of the sport’s unified rules package for 2022 that limits travel in the rear end of the car in an effort to prevent cars from lifting off the ground.

In my opinion the droop rule has been horrible for Late Model racing. So much harder to pass than it was without the droop rule. Guys aren’t charging from the back like they used to https://t.co/o5gQ8mi4Js

I’m not ready to ascribe that as the cause. Last year, the only major tour to utilize the droop rule was the World of Outlaws, and both Davenport and Mike Marlar, two of the top-three late model drivers in 2022, were not regulars on that tour. Translation, they’ve had to adjust to droop as a new rule this year, yet combined the two are top-five fixtures everywhere they go. It could very well be these guys just hit the package on the head for 2022.

Having said that, the powers that be that agreed to unified rules in 2022 as a means to reduce costs for late model drivers, allowing them to tour hop (a VERY welcome development) would do well to have their tech people thinking long and hard about what they’re seeing on track. Davenport, Marlar and Chris Madden are big names in the sport and they all have great fanbases, but combined they’re dominating to a level that could become a turnoff if it continues indefinitely.

I will admit I’ve paid little attention to the United States Modified Touring Series (USMTS) in 2022, partially out of personal preference (I’d rather watch super late models, sprint cars and Northeast modifieds, and those classes alone are plenty to write about), but partially because after watching the tour closely in 2021, it got almost too daunting to keep track of. The fields in this series are deep almost to a fault, with the series frontrunners routinely running B-mains in part based on the tour’s race formats.

Case in point, I had to do a double take when I read that this weekend saw Rodney Sanders, a driver synonymous with winning everything under the sun in the Lone Star State, breaking a streak of over a year without a win on tour. It was a shock to see a driver that caliber out of victory lane that long and a shock to me as well that, despite consuming dirt racing content dozens of hours a week, I was unaware of this streak.

Two reasons I bring this up. One, with Knoxville Nationals overload still on the brain, the data side of me liked seeing two preliminary nights break up the 101-car field, allowing me to get oriented with the overall storylines of the event the same way the Chili Bowl ramps up over a week to get to alphabet soup day.

Two, I finished watching the latest season of Drive to Survive this weekend. And while I would go to an enduro on dirt before a Formula 1 grand prix, I have to concede that part of the reason that series and its storylines are so compelling is because there’s only 20 of them. It makes it easier to follow and digest F1 races and content alike.

I never want to say dirt racing is too big for its own good. The entrepreneurial spirit of the sport where anyone with a car can show up at race wherever they damn well please is a great thing that big-time NASCAR has regrettably eschewed. And the USMTS team has earned that car count with the biggest purses in modified racing and a rulebook that’s inclusive rather than exclusive of many packages.

But there’s also truth that you can have too much of a good thing.

3, Crowd hyperbole has to stop

I brought this up during Eldora’s major events earlier this year, but here we go again. The Knoxville Nationals crew on DirtVision couldn’t stop talking about how the crowd was the biggest and most energetic ever. The MAVTV crew told the exact same story about the North/South 100 at Florence.

Yes, both races were packed to the gills. Knoxville itself was an actual by the numbers sellout, and I half expected the frontstretch grandstand at Florence to collapse.

What a crowd for the #NorthSouth100 @FlorenceSpdwy tonight 🏁

Feature is coming up soon on @MAVTV. pic.twitter.com/TznYs64wHE

But let’s get real here. Florence always draws big for the North/South 100. And Knoxville objectively has a grandstand that did not change in size this year. The Nationals have sold out before, just like last year. And what’s more, Knoxville actually capped pit pass sales this year to keep the infield crowd in check.

Both of these events were exciting displays of the health of dirt racing in 2022, and there’s no reason for commentators not to embrace that. But it’s very easy to celebrate crowd and energy without hyperbolically claiming that every single year is bigger, better, bestest.

First, let’s get some good news out of the way. Parker Price-Miller, who fractured vertebrae in a violent first-lap crash in the Knoxville Nationals A-main, is back at home to begin healing.

Now let’s rewind to DirtVision’s coverage of said incident. The cameras stuck with the destroyed racecars of PPM and JJ Hickle right after the accident occurred, cutting away as soon as it became apparent that PPM was injured after exiting his machine.

In retrospect, it was probably a mistake to do that, with the safer option being to cut away until confirming that the drivers were in fact uninjured. But out of the 200 or so dirt races I’ve watched this season, I can’t think of any situation like the one seen at Knoxville Saturday night where a driver was able to climb out of their racecar only to then realize that they were in fact seriously hurt. The immediate cutaway as soon as it was obvious PPM was hurt made it clear DirtVision knew the right thing to do.

That didn’t stop Barry Braun, the man behind the XR Super Series (and the proprietary RaceXR streaming platform that goes with it) from immediately jumping down his competitor’s throat for a perceived failure of streaming ethics.

Another day, another @dirtvision camera on a wreck while racers are hurt and rolling on the ground during a RED FLAG during the biggest race of the year @knoxvilleraces Knoxville Nationals. Do better.

Again, I don’t disagree with Braun’s stance that an immediate cutaway from incidents is the way to go, and his own RaceXR service did an excellent job of just that during their Bristol Dirt Nationals coverage back in March.

I do, however, question the objectivity and frankly the value of this attack. For one, DirtVision does NOT make a habit of this. And two, as much as I love the money and events that the XR Super Series have brought to late model racing, RaceXR’s production value despite being the most expensive streaming platform in dirt racing is atrocious.

Agree with this. Barry’s production crew is 110% amateur in Croatian to DIRTVision.

While NASCAR this weekend is celebrating having seven countries represented on the entry list for the weekend’s events at Watkins Glen (call me back when there’s seven continents on the grid), the past couple of weeks have seen NASCAR’s yesterday making headlines on the dirt.

First, rewind back to last weekend at Volusia Speedway Park (again, I admit, I’m behind in keeping up with modified racing this year). Courtesy of a teardown by his son David, 81-year-old Buzzie Reutimann scored a feature win at Volusia Speedway Park and took the points lead in the track’s modified division. Outside Groove wrote a fantastic feature on the story that’s well worth a read.

At 81 years old, Buzzie Reutimann continues to dazzle, with a win this past weekend at @VolusiaSpeedway and the points lead in the modifieds. Read more about this ageless wonder.

Fast forward to this past weekend, and it was Jeremy Mayfield making headlines, scoring a top-10 finish in the World 50 late model feature at Paducah International Raceway in Kentucky.

If watching European millionaires isn’t your thing, find your local dirt oval. There’s excitement to not knowing the entry list until the day of an event.

6, Putting the Crown in Silver Crown

I’ve been a super late model junkie since the first time I went to a dirt race at my home track in Winchester, Va. But I have to concede that the two races that I have circled on my calendar more than any in all of dirt racing are when the USAC Silver Crown Series tackle Illinois’s dirt miles. The first of such races is this weekend, with the Crown cars hitting the Springfield mile on the Illinois State Fairgrounds.

What's it feel like to stand on the gas in a USAC Silver Crown car at the @ILStateFair?

Fast. 🤯@Logan_Seavey shows the fast way around the Springfield Mile in this clip.

Springfield is where he & the series return ☝️ week from today on Saturday, August 20!#Bettenhausen100 pic.twitter.com/WMqBjOB55p

For anyone with a Flo Racing subscription, this is required viewing. You will not see a better race in any discipline.