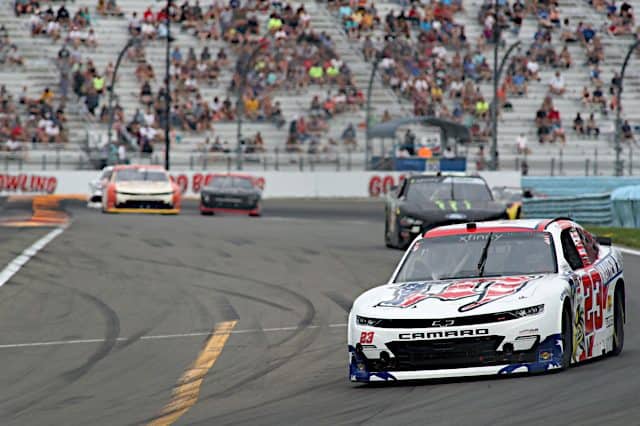 After a one-week layoff, the NASCAR Xfinity Series returns to action in New York at Watkins Glen International.

Forty-two cars are entered for 38 spots, meaning four drivers will not race in the Empire State after qualifying, barring any entry list changes.

Brandon Brown will attempt the race in BJ McLeod Motorsports’s No. 5 Chevrolet. Brown has made one other start outside of his regular ride at Brandonbilt Motorsports, driving for Mike Harmon Racing at the Indianapolis Motor Speedway road course.

NASCAR Cup Series driver Cole Custer returns to the series with SSGLR in the No. 07 Bucked Up Energy Drink Ford. Custer has recorded a win and three top 10s in four starts this year.

Andy Lally will be in the team’s No. 08 Refology Ford in his fourth attempt of the season.

Hendrick Motorsports returns to the series with William Byron behind its No. 17 Hendrickcars.com Chevrolet. Byron has competed in two races in 2022 with JR Motorsports.

Connor Mosack looks to make his second start of the year with Sam Hunt Racing in the No. 26 Rad Cats Toyota. Mosack raced at Portland in Joe Gibbs Racing’s No. 18 Toyota.

Jordan Anderson Racing will once again attempt to field two cars after team owner Jordan Anderson failed to qualify at Michigan International Speedway in its first attempt. Austin Wayne Self seeks to make his NXS debut in the No. 32 AM Technical Solutions Chevrolet.

Patrick Gallagher attempts his fourth start of 2022 with RSS Racing. Gallagher will drive the No. 38 Belle haven Ford.

Veteran driver Stanton Barrett will attempt his first series start since 2019 with Mike Harmon Racing. Barrett will pilot the No. 47 Horseheads Brewing Chevrolet.

Kris Wright attempts to begin his stint with Brandonbilt Motorsports in the No. 68 First National Bank Chevrolet. It was announced that Wright will compete in nine races with the team the remainder of 2022.

Scott Heckert will attempt the race with BJ McLeod Motorsports to make his fourth start of 2022. Heckert will pilot the No. 78 Malco Automotive Chevrolet.

Ross Chastain will attempt to drive the No. 92 Protect Your Melon Chevrolet for DGM Racing. Chastain has made two series starts in 2022.

The green flag is set to wave on Saturday, Aug. 20 with coverage at 3 p.m. ET on the USA Network.