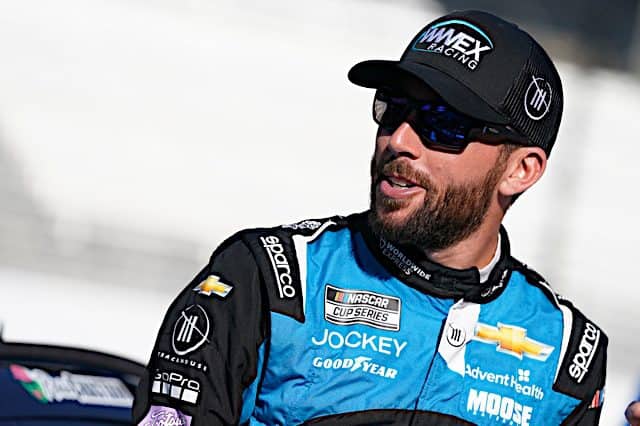 Did You Notice? … Ross Chastain continues to rack up enemies heading into the NASCAR playoffs?

Add Kyle Busch to the refresh list after Chastain’s No. 1 Chevrolet made contact with Busch’s No. 18 Toyota, triggering a multi-car wreck in Sunday’s (Aug. 14) final stage at Richmond Raceway.

The incident, from my vantage point, looked like one of those “racin’ deals.” Busch appeared to move down just as Chastain drifted up, bringing them both together and spinning the No. 18 around. Chastain wound up with the worst of it, limping home 18th after winning stage one, while Busch was able to fight his way back into the top 10 (ninth).

But with the way drivers view Chastain at this point, whether it’s really his fault doesn’t matter much anymore. Any form of contact produces a verdict of guilty before proven innocent.

“We got Chastain’d this week,” Busch said after the race. “We were his victim this week.”

Just how many drivers has Ross ticked off at this point? It’s such a long list, it felt worthwhile to compile before the playoffs begin. After a season-high four straight races outside the top 10, just reading it shows the growing mountain both Chastain and his team have to climb, emotionally and on the racetrack, in order to be reemerge as a top-tier title contender.

Chase Elliott: The current point leader has had two major incidents with Chastain. The one everyone remembers is at World Wide Technology Raceway in June, where Chastain slipped up into the No. 9 car and spun him out.

“I’m [expletive] over it,” Elliott said after the incident. “He ran me over going into [turn] 3 and he ran me over again.”

Elliott responded with some contact later on that pushed Chastain out of the groove, but didn’t spin him out. The drama occurred less than a month after one of the hardest crashes this season, when Chastain hit the wounded car of Kyle Busch in the All-Star Race. The No. 1 car got lifted in the air, sped up like it was shot out of a cannon and wiped out Elliott, as all three drivers suffered hard hits.

Could Chastain have avoided it? “I guessed left and froze,” he said.

Ryan Blaney: The second-place point man (but last on the playoff grid) got into it with Chastain at Richmond in April. The duo were fighting for sixth when Chastain laid the bumper to the No. 12 Ford in order to get by.

“He just decided to send me,” Blaney said after the race. “So, next restart, I sent him. Now, we’re even, I guess.”

Of all the drivers on this list, it’s probably the weakest holdover. But with all the drama surrounding Chastain, it’s hard to see Blaney suddenly giving him a little extra slack.

Kyle Larson: Larson got frustrated with Chastain at Sonoma Raceway in June, using his bumper when the No. 1 car slid aggressively in front of him. But perhaps the most revealing moment between them came two weeks ago at Michigan International Speedway, when Larson’s spotter suggested the two Chevrolet drivers work together in order to battle for the lead.

“Ross doesn’t work together with anybody,” he said. “Funny.”

The 2021 NASCAR reigning champion being that wary with someone who’s a pseudo-teammate? That doesn’t bode well for a month from now.

Christopher Bell: Bell made contact with Chastain at Michigan, taking them both out of contention to win. Bell told Frontstretch this weekend at Richmond he shoulders the majority of the blame but felt “it was not 100% on me.”

When talking with NASCAR.com, Bell went further, claiming, “I’ve been put in that exact same position on the flip side, probably 30, 40, maybe 50 times this year and, you know, I’ve lifted. So I made a mistake, but [Chastain] had an option to lift and cut us both a break, and he didn’t and we wrecked.”

Doesn’t sound like someone who’s having lunch with Chastain anytime soon. In fact, the wreck almost sounds like a case of his own frustration with Chastain boileth over.

Kyle Busch: Most recent example? See above. But Busch has been mad at Chastain ever since the Atlanta Motor Speedway event a year ago where he helped block for then-Chip Ganassi Racing teammate Kurt Busch. Back then, Busch referred to him as a “POS” (I think you can figure that one out) as the decision showed him “what kind of driver he is.”

Add in Busch’s own stressors (namely, who he’s going to be racing for in 2023) and that leaves him someone Chastain needs to avoid at all costs.

Denny Hamlin: It’s the one driver everyone knows from this list without looking. Take your pick: Gateway. Atlanta. Revenge at Pocono (just not total revenge). If there’s two people destined to come together in the postseason, it’s them.

See also
Denny Hamlin: The Most Interesting Man in NASCAR?

Tyler Reddick & Chase Briscoe: Both drivers haven’t had contact with Chastain, per se, but fought tooth-and-nail at multiple races this season. The trio battled hard for a win in March, a race that seems like decades ago before Briscoe pulled out his first career win at Phoenix Raceway.

Then, just two weeks ago at the Indianapolis Motor Speedway road course, Chastain snuck in front of Reddick for the lead during a green-white-checkered finish. Similar to Briscoe last year, despite knowing a penalty was coming, the No. 1 driver held Reddick up at the finish. The duo raced clean but contact could have cost Reddick the victory; some might argue the racing was unnecessary with Chastain pulling an illegal move.

Austin Cindric: Cindric is probably the most neutral of anyone on this list. But Chastain’s bid at the Indy road course did hold up the No. 2 Ford and cost him any chance of going after Reddick for the victory.

In case you’re counting at home, that’s over 50% of the current playoff field. Still on Chastain’s good side: teammate Daniel Suarez (you’d hope?). Former CGR teammate Kurt Busch also appears to remain on good terms. Hendrick Motorsports teammates William Byron and Alex Bowman have also avoided trouble, fellow Chevrolet drivers that have worked side-by-side with Chastain. Bowman even went so far as to publicly acknowledge his friendship with Chastain in March, although he added, “He’s a pain in the ass to race with, but I tell him that all the time.”

Another interesting ally is Joey Logano, who voiced support for Chastain’s move to utilize the access road at the Indianapolis Motor Speedway road course. A streaking Kevin Harvick is also a fan, avoiding conflict while saying Chastain’s style of “that I don’t give a sh*t about what happens and if you don’t like it, sorry — having that edge is something that will make him popular because of the way that he races.”

Unfortunately, that popularity doesn’t extend to his fellow competitors, a topic we’ve broached at length in this space. We’ll find out shortly just how much being a lone wolf on (and off) the racetrack will matter.

Austin Dillon: Dillon expressed his anger after an Atlanta wreck in July took his No. 3 out of the race. In a difficult year for Dillon’s team, Atlanta’s one of the few races he could have been a serious contender for the win.

In that incident, it was actually Chastain and Martin Truex Jr. who made contact. But the No. 3 couldn’t avoid the mess, leading Dillon to say, “We were just a casualty of Ross Chastain once again. That was a pretty good lick there […] when you got guys like him wrecking half the field, you might as well take a different strategy sometimes.”

AJ Allmendinger: Allmendinger was on the receiving end of Chastain’s pinball-style maneuver to earn his first Cup Series win at Circuit of the Americas in March.

Aric Almirola: Yes, even the mild-mannered Almirola has lost his cool with Chastain. “He races over his head” was the general gist of a conversation with Yahoo! Sports after the veteran got into it with Chastain at Atlanta last month.

Martin Truex Jr.: The usually cool-tempered Truex was downright livid with Chastain after getting wrecked during the last lap at Dover Motor Speedway in May. That’s just one of a trio of incidents between the two. The last was at Atlanta in July, which ended with the 2017 Cup champion issuing a warning.

“He’s making a bunch of enemies,” Truex said on SIRIUS XM NASCAR Radio. “People tend to remember that stuff when the playoffs come around and things get heated, so we’ll see how things play out.”

chastain will replace stenhouse as the one to avoid on the tack. have to admit chastain does make it interesting, at times.

Does anyone really care about an enemies list? Thought not.

We need a couple more drivers just like Chastain to keep the pot adequately stirred. Think about the Sports Writers! The Drama! Tune in next week to see who gets stuffed in the wall!!

Does anyone remember a fellow by the name of dale earnhart sr.THE INTIMADATER chastain is the new intimadater

I think THE AGITATOR is a better descriptor for Chastain! lol

Some of the incidents were definitely due to his aggressive style. But now, no driver likes to accept any share of blame. And with Chastain involved it’s easy to lay everything off on him. I have no idea how he’ll react if he gets taken out during the playoffs.
But anyone contemplating doing that, would be best to remember how the Logano, Kenseth deal turned out.

At least Ross is consistent in going for the win. He’s not out there trying to gain positions as others drop out. Chastain does drive over his head at times and I think that’s great and makes it interesting.

Ideally, if a driver is going to have 35 guys on the track that want to exact revenge, he should have 35 wins to go with it. Most drivers would be fine with those numbers.