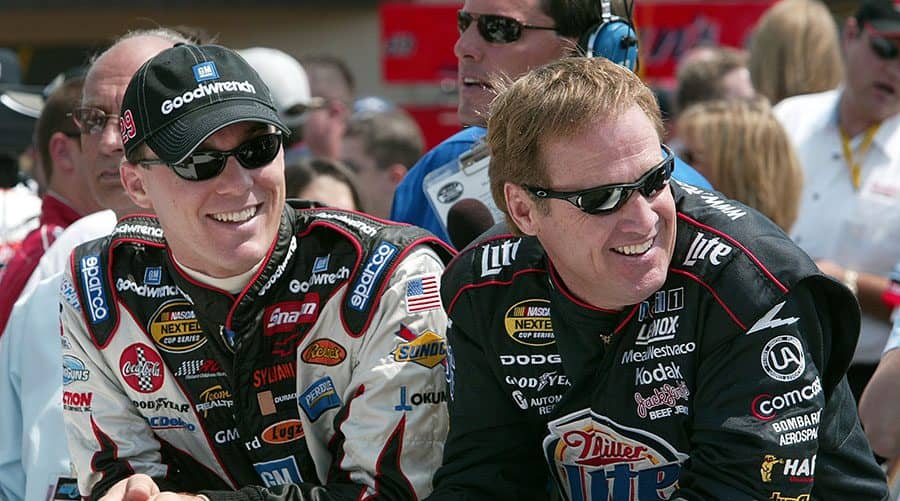 While many might claim the end arrived with Dale Earnhardt’s death, it lasted well past that dark day.

Its true date of expiration is likely located somewhere in the vicinity of July 27, 2008, the day of the 15th Brickyard 400, and Sept. 29, 2008, the day the stock market crashed and sent the economy into a tailspin that impacted everyone.

However, reminders of NASCAR’s heyday — jam-packed grandstands, NASCAR drivers everywhere on TV and races lit up by camera flashbulbs — are still here.

At least while Kevin Harvick is around.

For a long time, Jeff Gordon represented a bridge to NASCAR’s past. He made his Cup debut in Richard Petty’s final start in 1992, he competed in the final North Wilkesboro race in 1996 and raced full time until 2015.

Last year, one of my favorite stats that was thrown around was that Ryan Newman and Kurt Busch were the last active NASCAR drivers to have competed in races with Earnhardt (and Busch was the last driver to be flipped off by Earnhardt, in the 2001 Daytona 500).

Newman’s NASCAR career unceremoniously ended in 2021, and Busch’s future is in limbo as he recovers from a concussion.

While Busch broke into the NASCAR Cup Series a year before Harvick, Harvick has been in NASCAR’s orbit far longer.

On Oct. 19, 1995, just under a year after Earnhardt won his last Cup title, a 19-year-old Harvick made his NASCAR Camping World Truck Series debut. It came at Mesa Marin Raceway, his home track in Bakersfield, California. Before 2000, he made 69 Truck Series starts before getting called up to the NASCAR Xfinity Series by Richard Childress Racing.

In the last 27 years, Harvick has seen a lot. The good, the bad, the sport’s highest peaks and its low point.

If there’s any one track (not named Indianapolis Motor Speedway) that best represents the sports decline in popularity and stature over the last 15 years, it’s arguably Richmond Raceway. At one point, Richmond was nearly encircled by grandstands that sold out every year for 16 years. Now there are no grandstands along the backstretch or in turn 3. Those that remain are never completely full.

On Sunday (Aug. 14), the short track enjoyed one of its better crowds in recent years. After winning his 60th career Cup race and his fourth at Richmond, Harvick was asked to reflect on how the track and crowds have evolved in his time.

But because of his experience, it was “hard” for Harvick to answer.

“I remember, I guess it would have been — I don’t know if it was the first [Richmond start] or second one [in 2001],” Harvick said. “But I got into the back of Ricky Rudd coming down the back straightaway, and all I saw were flashbulbs and people waving their arms, and then he moved me out of the [way to win], and I think the whole place stood up and cheered.”

“It’s hard for me to give you that perception because I’ve seen it with 100,000-some people here and full,” Harvick continued. “I think, obviously, sports today are different than they were then as far as live audiences and things like that. It’s just a different landscape that we live in.

“But I’m glad that I got to experience racing and being competitive in the front of those fields and being able [to race in front of] 105,000 [fans], whether they were rooting for you or rooting against you. It was still pretty neat because they’re close here. It’s like Bristol. The boos are louder, the cheers are louder and at that point, nobody had phones, so they all had their cameras that would flash.”

A good sign you’re watching a NASCAR race from its peak era is if it’s a night race. Everyone had a disposable camera, and everyone took pictures at the most important parts of the race.

“That was always one of my favorite things coming to the green flag were the lightbulbs and all the things that would flash off on the cameras and things back in the day,” Harvick said. “It’s just different. I sound like my dad or my parents, right? You guys all know it and sound old and talk about how it used to be. It’s just different. It’s not the same.”

Whether from NASCAR’s own choices, changing demographics, changes in audience taste or the media landscape, NASCAR is nowhere near where it was when Harvick arrived on its main stage in February 2001.

Through it all, Harvick is still here and, at least for now, still winning. After Sunday’s race, Harvick has 60 career NASCAR Cup wins. Next up on the wins list is Earnhardt with 76.

If both he and Kurt Busch race through the 2023 season and decide to hang it up, the last two active drivers to compete under the banner of the Winston Cup would depart the sport at the same time.

That fact he’s one of the last standing from a specific era is something Harvick takes “pride” in.

“I love it,” Harvick said. “A lot of the guys that I grew up racing with, they’re all retired and doing other things, but I get to still see them. It’s those quiet high fives that are a lot of fun and kind of keep it in perspective for me because of the fact that you’re older and supposed to be done and kind of headed down a path that is toward the end.

“Maybe sometimes I need to just stop and kind of take it all in, but I don’t know. I always feel like it’s bragging when you stop and talk about yourself. I think, for me, I like most of the kids in the garage. I like being around the competitors. I’ve got a much better relationship with most everybody in the field, the crew chiefs, the owners. I like that part.

“You want them to respect you when you’re done.”

man i remember attending races in the 80’s and 90’s lugging my 35mm camera with me.

watching night races on tv you always saw all the flash of cameras going off when they’d take the green flag and again at the end of the race. now everyone has their phones up taking pics. same things with concerts too.

i’m the age where this is the 3rd or 4th time i’ve gone through drivers cycling out because of age/retirement. reallizing that most of the drivers now never raced with dale sr and dale jarrett or rusty. wow. in a way it would be good if harvick won the championship. one for the older guys and gals in the sport.

as they say, time marches on.

Isn’t Kurt the only one left that raced against Dale Sr?

On Edit: Nevermind, I misread the article and thought they were including Newman.

Kurt Busch was also the last driver to get punched in the mouth by Jimmy Spencer!

Last edited 1 month ago by Jeremy
3
0

Nascar has shot their own self in foot. Too much political correctness and catering too one group. Change races to where it’s not even like going to race anymore. Too many rules for fans. They forgot where they started!!!!!!!! Bye bye nascar!!!!

I agree NASCAR stopped being racing when they micro manage everything. Stop with the stages this isn’t little league where everybody gets a trophy. Stop with competition cautions if the crew chief wants to check his tires let him call his driver in. And how quick they got rid of the junior stripe on the back stretch after he retired. NASCAR should grow up

NASCAR is killing it’s self. For instance low low attendance at the Indy. 200. Can’t even guess how many millions of dollars lost. Get Smart , Return to the Brickyard 400.I Iive in FL. Was there in 1994 for the inaugural , and have been there 3 other times. I wouldn’t think of rdriving there for the Dumb 200 road race.