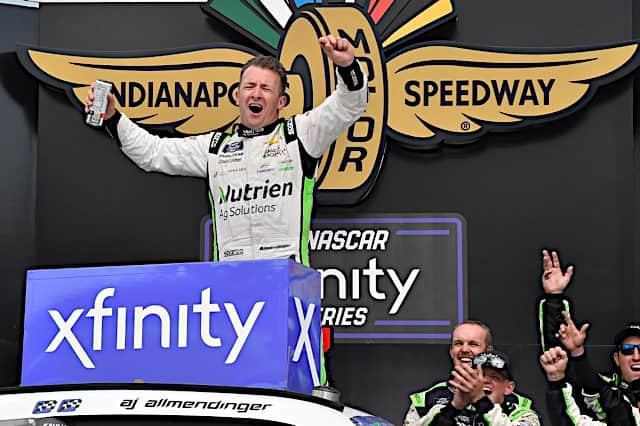 The topic of sponsorship funding for NASCAR Xfinity Series teams has occupied the spotlight recently, as two teams have faced funding-related decisions.

Following the Indianapolis Motor Speedway road course, Brett Moffitt was relieved of driving duties in Our Motorsports’ No. 02 entry.

This week, we learned that Brandonbilt Motorsports signed Kris Wright to nine of the remaining 12 races of the season. He brings funding, which the No. 68 team needs. This week at Watkins Glen International, Brandon Brown, who also stepped out of the car at Indianapolis in favor of Austin Dillon, will pilot the No. 5 for BJ McLeod Motorsports, who recently parted ways with Josh Williams.

Moffitt and Williams have yet to land new rides.

A hot topic on the NASCAR Cup Series side of the infield has been the next media rights deal, specifically regarding the monetary distribution of the contract between NASCAR, the tracks and the teams. The current media rights deal began in 2015, will conclude in 2024 and is worth $8.2 billion or $820 million annually. No matter the length of the next contract, the goal is unquestionably to get more money annually from the media partners.

On April 28 this year, FOX Sports’ Bob Pockrass tweeted the purses for that weekend’s races at Dover Motor Speedway. The total purse for the Cup race was $7,205,230, substantially higher than the Xfinity purse of $1,419,713.

Pockrass quote-tweeted the response and said that currently 90% of TV money goes to Cup teams, with only 9% going to Xfinity and, shockingly, only 1% going to Camping World Truck Series teams. And the percentage of TV money isn’t all of the $8.2 billion that comes from the media deal. Currently, tracks get 65% of the $8.2 billion, NASCAR gets 10%, and teams get the remaining 25%. From that, 25% is where the Xfinity Series gets their 9%.

NASCAR wants to see more money annually from the media rights holders, but Cup owners have been vocal about wanting a larger slice of the pie. The primary argument for getting more money would be a decreased reliance on sponsorship dollars to fund a season-long effort.

That’s not just a Cup issue but an Xfinity and a Truck issue as well.

The Cup Series will always be at the center of attention in the media rights talks, and rightfully so. It is the premier stock car series in the world, and any media rights deal will be centric to that series. But with the recent funding issues for Our Motorsports and Brandonbilt Motorsports, maybe talks about increasing the Xfinity allocation of purse money should be sparked.


I’m in the club where I would like not only to see the amount of money going to teams increase but increase enough that four more charters can be added, and every charter still gets a substantial increase of cash flow per race, allowing the reliance on sponsorship dollars to drop. That goal becomes trickier to accomplish when the Xfinity and Trucks should see increases as well.

Of the 21 races in 2022, 19 Xfinity purses have been released to the public. Only the season-opening race at Daytona and the Texas Motor Speedway race during NASCAR All-Star Weekend haven’t been disclosed. The highest purse was at Indianapolis ($1,750,651), and the lowest was New Hampshire Motor Speedway ($1,175,214).

Naturally, if the next media rights deal leads to more than an approximate annual value of $820 million, the Xfinity Series purses will go up. But throwing a percentage point, two or three on top of the 9% allocated to the Xfinity Series would go much further to help the teams and their owners fund a team with less sponsorship. Of course, this also helps attract potential new owners to the series as they will see they need to bring less money to the table to run a team.

I will never advocate for a charter system in any series outside of the Cup Series, but I will advocate for their purses to see an increase. No matter why Our Motorsports and Brandonbilt Motorsports struggled to piece together enough funding for their full-time driver to remain in the car, it should be a wake-up call for NASCAR.

At the end of the day, the goal to decrease a team’s reliance on sponsorship dollars to make it to the racetrack shouldn’t be an issue exclusive to the NASCAR Cup Series. The Xfinity and Truck series should be included in that goal.

The health and stability of the teams in those series are just as important as Cup teams. While Cup owners likely wouldn’t admit that, at least publicly, they know it to be true deep down. Without a stable feeder system, the quality of racing in the premier series will suffer.

How much more competitive could the top 20 in the Xfinity Series be if more money was funneled into each race purse? The phrase “more money, more problems” isn’t always true. More money for a 17th-place finish means a team can go out and attract a better tire changer or hire an engineer to their crew, allowing them to compete closer to a team regularly finishing in the top five.

For the long-term health of teams in NASCAR’s lower divisions, they also need a larger piece of the pie in the next media rights deal.

I have been a Ford fan all my life (72 yo). I have always liked Xfinity series, especially Mark Martin in the 60 car, and of course many others. More recently Cindric and Briscoe. But I’m about ready to give up on it. I have no desire to watch Chevy and Toyota win every race. Herbst has shown little chance of winning, 38 & 07 (w/cup driver) can run up front, but the series badly needs some Ford’s that can compete for the win every week. Briscoe & Cindric proved it can be done. Penske especially needs to get cars back out there, or I’m done watching.

More $$ in the owner’s hands is definitely needs to happen. But, & as Pee Wee Herman says, “everyone has a big butt.”
Look at the stands for Truck & Xfinity races. It’s sure not ticket sales that drive tracks to host the under card races. Sure, NASCAR has a big bargaining advantage with the Cup series, but it still comes down to the media $$.

NASCAR double dips by owning as many tracks as they do but getting them to accept a smaller share would be a hard sell.

The answer is getting more from the media partner, but there’s a fine line. Look how much $$ overbuilding capacity cost the sport in the ’90s when it looked like the only way was up.

We as fans could be looking at way more commercials, or PPV.

I already PPV, by having to carry a higher TV package to have access to NASCAR. I absolutely won’t spend any more for PPV. I’ll just listen to radio coverage. The announcing is better on them anyway.