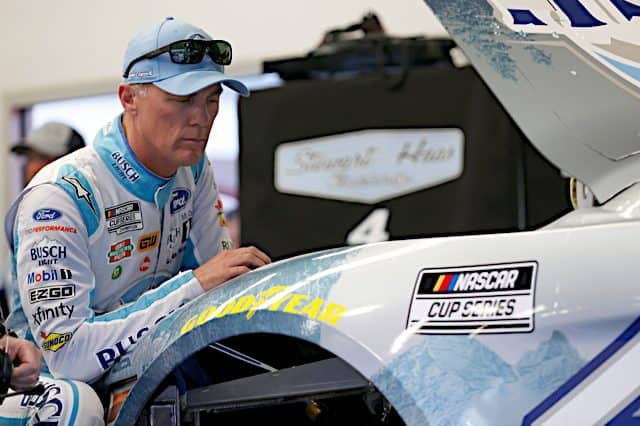 It had been almost two years since Kevin Harvick won a race in the NASCAR Cup Series. It’s amazing what can change in two weeks. Harvick won his first race since September 2020 at Michigan International Speedway two weeks ago and then followed it up with another victory this past weekend at Richmond Raceway.

The Richmond victory marked his 60th career win and also made us wonder: Should Harvick be mentioned in the championship conversation? After being a contender for most of his career many thought that the sun had set on his goal of becoming a two-time series champion, but perhaps his back-to-back wins has changed that narrative.

Is Harvick a championship contender in 2022? Michael Nebbia and Stephen Stumpf debate whether or not the 46-year-old driver from Bakersfield, California is on a hot streak or if he has returned to form.

Let’s Pump the Brakes for a Moment

It’s been an impressive two weeks for Kevin Harvick. He ended his winless streak at Michigan after driving away from the field on the final green flag run. It was a great moment. He then followed it up with an impressive victory at Richmond where he passed the dominant car of Joey Logano and then proceeded to hold off challenges from Chris Buescher and Christopher Bell in the final laps for back-to-back wins and the 60th of his career. It was nice to see Harvick being competitive again.

But even with the wins, it is a stretch to call Harvick a championship contender at this moment.

Harvick has only led 106 laps this season, 93 of which came in his two wins.  He had led a combined 13 laps in his first 22 starts this season. Before his winless streak was broken at Michigan, there were questions as to whether Harvick would ever reach victory lane again. To go from possibly never winning again to a title contender in the span of eight days is a huge jump to make. While two wins are impressive, I need to see more from him before I consider him a championship contender.

In addition, Harvick has struggled to find speed at the beginning of races. Harvick’s average start in 24 races this season is 18.6, by far the lowest of his SHR tenure. The slow starts also mean that Harvick rarely grabs stage points; he has only collected 82 on the season, which is tied for the 13th-most through 24 races. For comparison, Chase Elliott leads the way with 211 stage points.

That was on display last weekend at Richmond, as Harvick qualified 13th and fell back to as low as 21st in stage one. The team then made the right adjustments under the first pit stop, and No. 4 car was a rocket ship for the final 250 laps. While they have been great at getting the best finishes possible, a lack of stage points will be a detriment in the playoffs when every point counts.

However, just because Harvick is not a championship contender now doesn’t mean that he can’t become one later in the season.

It’s clear that Harvick and the No. 4 are running much better than they were at the start of the season. After Michigan, crew chief Rodney Childers said that the turning point was a practice session at Nashville Superspeedway; that passes the eye test, as Harvick has been running much better since July, even before his back-to-back wins. If they can continue to improve, my opinion may change. But for right now, I’m not putting him in the championship conversation.

It’s clear that Harvick has found his rhythm, and the question now turns to what he can do in first round of the playoffs. If he can score another win or continuously run up front in round one, only then can he be penciled in as a serious championship contender this season. – Stephen Stumpf

Earlier this season, I was thinking Harvick was done. It appeared that maybe father time had caught up with Harvick. After all, father time is undefeated.

I thought maybe this new car and how much you had to change your driving style was just too much for him to adapt to, especially when others seemed to be adapting faster and were with teams that seemed to have had more speed with this new car. Yet, with some practice this year and a bit more track time, Harvick and his team have been able to work out the kinks and have shown they have what it takes to compete for a championship.

I think people are making the mistakes of Harvick just having speed for these two races and that’s it. No. He’s had speed for a few weeks now and has finally gotten the results. He is back in the hunt, back to the Kevin Harvick of old.

There’s something very underrated about Harvick that everyone seems to forget when discussing whether or not he can win a championship.

He can win anywhere.

There are only a few drivers in the sport’s history that had a legit chance to win at every type of racetrack. Harvick is one of those drivers. Short tracks, superspeedways, road courses, speedways, you name it. He can win there. That’s an advantage over pretty much any driver in the field. He has proven over the last few weeks that he hasn’t lost his edge and now has the momentum to carry himself into a deep playoff run.

Harvick is proving age is just a number. He has the most wins of any driver in NASCAR history over the age of 40. Rodney Childers is one of the best crew chiefs in the garage area and his chemistry with Harvick is pretty much unmatched. That too, is a reason to like the chances for the No. 4 Ford.

In the end, Harvick has found his groove and now has the confidence needed to be a champion. With a little bit of luck, I don’t think there’s any doubt Harvick will be in the Championship 4 at Phoenix Raceway in November. Just like he used to be. – Michael Nebbia

SOME Ford drivers are very good and proven winners, as usual some are just seat fillers for the dollars they get to operate. The past few years whether it is NASCAR clipping their wings or the speed not there, imo. They could not and did not close the deal. No fault of MOST Ford drivers.

Crew chiefs in certain premier teams just flat out suck and have for years, and yet they get a contract renewal? Baffling. There are some drivers that rise against the lack of ability of the car and strive every week to make lemonade out of rotten lemons, THEY are the force behind any showing of “FORDS”. IMO. Those few drivers give it 100 percent week in and out. The Tony camp has been a non factor for some time, maybe something is changing. Is Tony now back at his business, honeymoon over? Someone had a meeting with Ford? Somebody talked to the guys that make the car go fast? Again, consistency and time will tell. IMO. Not a fan of Harvick and his style of drama, we shall see. IMO

W/O the second win, & with nothing much in the way of stage points, he wasn’t looking too good to transfer out of the firat round.

He’s still an underdog, but his chances are much improved. But it’s going to take at least another win somewhere in the playoffs to make him a legitimate contender.

All 16 of them are championship contenders. But eventually it comes down to one race with 4 driver’s for all the marbles. Luck or unlucky that one day. Someone else’s tire comes off and knocks you out. How can there be a favorite in this stupid scenario.