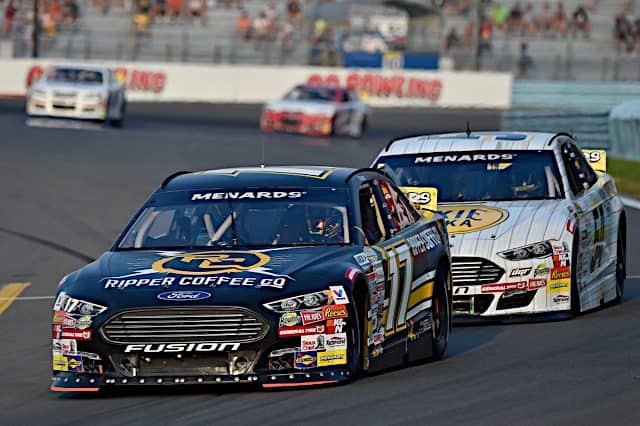 Over the course of this weekend, ARCA Menards Series drivers will compete twice at two very different courses.

On Friday (Aug. 19), they will make both left- and right-hand turns at Watkins Glen International. Then on Sunday (Aug. 21), they will race on the one-mile dirt track at the Illinois State Fairgrounds, also known as the Springfield Mile.

It is slightly more than 800 miles between the two circuits. The Springfield Mile also was part of an ARCA race weekend last year, following the event at Michigan International Speedway.

Last year, five drivers competed in the ARCA doubleheader. This year, 12 drivers are running both races.

Moreover, Stanton Barrett, Brandon Jones, Connor Mosack, Austin Wayne Self and Sammy Smith will all use the 41-lap General Tire Delivers 100 in preparation for their NASCAR Xfinity Series race also at Watkins Glen the following day.

Of the top three in the ARCA points, only Nick Sanchez competed in the ARCA event at Watkins Glen last year. He finished eighth. Overall, in his three ARCA road course starts, Sanchez has one top five – fifth in the 2021 event at Mid-Ohio Sports Car Course – and two top-10 finishes.

“I do believe we will have a much better shot at Watkins Glen from a speed perspective,” Sanchez said in a team release.

His Rev Racing teammate Rajah Caruth lost the points lead after Michigan International Speedway, and Caruth only has one ARCA road course start, this year at Mid-Ohio where he finished two laps down in ninth place.

Daniel Dye bested the two Rev drivers with an eighth-place finish at Mid-Ohio this year. Yes, the wacky weather-affected race was problematic for all three championship contenders.

In his ARCA starts this year, Jones has two wins at Charlotte Motor Speedway and Iowa Speedway as well as three top fives and three top 10s. The Xfinity Series regular has not won on a road course in his racing career, so he will be hungry to park his No. 81 Toyota in victory lane.

Smith meanwhile has the busiest slate of all the ARCA competitors. He is the lone individual to compete in all three events.

In addition, during the last ARCA off weekend, Smith won at North Wilkesboro Speedway in a late model competition, a historic victory for the 18-year-old.

Busy weekend ahead🫡@ARCA_Racing at @WGI Friday, @NASCAR_Xfinity at WGI on Saturday, and ARCA on dirt at @ILStateFair on Sunday🎟 pic.twitter.com/d7nGeytpbq

Smith has competed in both the Xfinity Series and ARCA in road course competition, accumulating one top five and one top 10 in the ARCA event at Mid-Ohio this year.

While he is not battling for the ARCA championship, Taylor Gray arguably is the favorite to sweep the ARCA doubleheader. He won the ARCA event at Mid-Ohio earlier this year. Plus, he’s earned three top fives at three ARCA dirt tracks with a best finish of third place in the 2021 race at the Springfield Mile. Gray certainly will have a fast No. 17 David Gilliland Racing Ford this weekend.

The 40th ARCA event at the Springfield Mile boasts a highly competitive field joining the series regulars. For Caruth, Dye and Sanchez, this 100-lap race will be their first start at a dirt track.

Both Caruth and Sanchez enter with their eyes firmly on the ultimate prize: the ARCA championship.

“It’s nice to have a points cushion, but I’m still focusing on my driving and getting better each race,” Sanchez said in a team preview. “We can’t check-up. These final races are extremely critical to meet the ultimate goal, winning the championship.”

“I’ve got to figure out what I was doing at the start of the year, to get back in my groove,” Caruth echoed. “This year has been a dream. I am extremely grateful for each and every opportunity I have been given.”

Dye, too, has his eyes on his first ARCA win of this season and second overall, and an excellent performance in this doubleheader might finally give him the points lead.

“I’m looking forward to this weekend and the opportunity to race at two completely different style racetracks,” Dye said in a press release. “I learned a lot at Mid-Ohio and am ready to use those notes for Friday at The Glen and see how all that goes. And Springfield is something I have absolutely zero experience with, being a flat one-mile dirt track, so hopefully we can get out of there with a solid finish and learn for DuQuoin [State Fairgrounds].”

The @ARCA_Racing Series has a big weekend ahead!

First off on Friday, @danieldye43 will race the Champion Container Corp. colors on the road course at @WGI.

The Atlas 100 is also the first of the inaugural Performance Dirt Seed Double. If a driver wins both ARCA dirt events at the Springfield Mile and DuQuoin State Fairgrounds, they will win $50,000. If no one sweeps, then $5,000 will be awarded to the top performing driver in both races.

Of the part-time competitors, Ryan Unzicker won the 2020 ARCA race at Springfield. His team owner Bill Hendren is retiring from ARCA ownership after the two dirt events, so Unzicker would love to earn another ARCA trophy.

Ken Schrader meanwhile has six ARCA dirt wins with one at Springfield in 1998. Seeking the $50,000 prize as he will compete in both ARCA dirt events this year, Schrader will pilot the No. 11 Fast Track Racing Ford at Springfield.

Buddy Kofoid is making his ARCA debut. Team owner Billy Venturini expects Kofoid to contend for the victory. It would be Kofoid’s second dirt win in a week, as he also won the inaugural race of the Kyle Larson-created High Limit Racing dirt track series.

This was a stupid move by ARCA. They ran double race weekends in the 2000’s, but they were a couple hundred miles apart and tracks that you could use the same car with some changes. It’s going to be tuff on the small teams to be close at all.