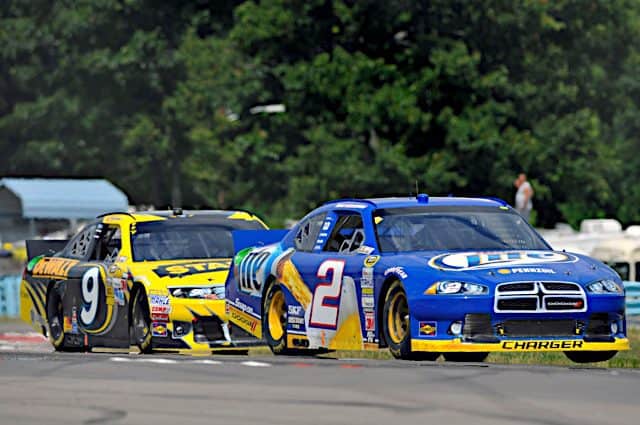 It has been a decade since one of the greatest finishes NASCAR has ever produced.

In 2012, Australian Marcos Ambrose returned to Watkins Glen International to defend his title of NASCAR Cup Series race winner, the site he’d scored his first career victory at a year earlier. That previous race didn’t have the victory battle it had the following year, as a strikingly violent crash involving a flipping David Reutimann and various other last-lap chaos brought out a caution and froze the field. Ambrose was out front, followed by Brad Keselowski and Kyle Busch (we’ll hear more from them later).

After years of close-but-no-cigar on Cup road courses, Ambrose finally secured his first career win with crew chief Todd Parrott congratulating him with a smirk-inducing refrain:

“Congratulations there, Ambrose — you are officially a winner in the NASCAR Nextel Cup Series,” he said, despite it having been almost four years since the renaming of NASCAR’s premier division. “Good job!”

Almost exactly one year later — 362 days, to be exact — the Cup Series was back in New York. The race sponsor had changed from Heluva Good! Sour Cream Dips to Finger Lakes, but little appeared different besides that: the car bodies were the same, the track was as winding as ever … and it came down to the exact same top three with two laps left as the year prior.

Coming to two laps remaining, Busch sat two seconds up on Ambrose and Keselowski. That’s not an eternity like it is at other tracks, especially with a road-course ace like Ambrose in second, but he was under fire from Keselowski, who was breathing down the No. 9’s neck.

Keselowski ran tighter through the bus stop and dove inside Ambrose for second, and after crossing the line things closed up between the top three. Busch went wide in turn 1 as the lead trio fanned out in the runoff, and moving down early sent the No. 18 spinning off Keselowski’s bumper in the esses.

Busch nosed up to the guardrail as Keselowski and Ambrose sped by, the contact allowing Ambrose to close on the No. 2. Keselowski had some slight damage from the incident and smoke trailed from the Miller Lite Dodge heading down the back straight, but he retained his lead through the bus stop as both bounced through the grass. Ambrose saw his window and took it, sending his Stanley Tools Ford into the carousel as Keselowski appeared significantly slower. The No. 9 had to back off a bit, but gunned the engine heading into the chute and gave the No. 2 a shot in the rear bumper, passing him in the process.

Keselowski nudged Ambrose right back in turn 6, sending him well into the runoff, but the Australian retained his speed into the short chute as they stayed side-by-side. Ambrose had the preferred line into the final corner and used it to his advantage, clearing Keselowski and taking the checkered flag half a second ahead of that year’s eventual champion.

In a Twitter thread from late 2019, Keselowski reflected on the finish and noted that Bobby Labonte’s No. 47 had dropped oil all around the track, especially in the final corners.

17). The track had become oiled down from the 47 car who had a part failure causing a progressively worse leakage rate around the track. This meant the final few corners would be the worst.

I tip toed into the carousel, “no need to make the same mistake twice,” I thought.

That fluid certainly played a part in some of the goings-on seen on the final lap, and it remains remarkable how Ambrose kept his No. 9 under control in both the carousel after driving in too deep and the short chute runoff after the bump from “Bad Brad.”

Since then, the three drivers involved in the chaos have had their careers go very different directions.

Winner Ambrose stayed with RPM through the 2014 season, surpassing 200 Cup Series starts, but never winning another race at NASCAR’s premier level (though he did score an Xfinity win at the Glen in ’14). He then returned to racing V8 Supercars and retired after 2015. The 2011 and 2012 victories were the culmination of years of struggles at road courses in NASCAR, having infamously stalled his JTG Daugherty Racing No. 47 in 2010 at Sonoma Raceway while trying to conserve fuel.

To that point in 2012, Ambrose had had a respectable season.

Back-to-back poles at Michigan International Speedway and Sonoma in the summer, top 10s in both of those races and five overall prior to Watkins Glen. He reeled off two straight top fives in the following two races at Michigan and Bristol Motor Speedway for eight top 10s on the year, second-best in his NASCAR career. 2012 also marked career-bests in average start and average finish, as well as a tie for career-best in points finish.

Ambrose’s finishes at the Glen prior to 2011 numbered third, second and third, and after the consecutive wins he finished 31st in 2013 (despite starting on pole) and second in 2014; his average finish sits at a 6.14, but without the 2013 outlier his average finish would be an incredible 2.0. At Sonoma, he qualified eighth or better six of the seven times he raced in wine country and finished in the top 10 in six of those seven races.

It was also the penultimate Cup Series win for Petty as an owner, at least to date. Aric Almirola did win a rain-shortened summer race at Daytona International Speedway in 2014, but since then the team has gone winless, consolidating down to one car for 2017 and re-expanding to two cars after partnering with GMS Racing for 2022.

It was his 2nd straight Cup win at Watkins Glen. #TheTasmanianDevil 🏁 pic.twitter.com/fJNBYQK06e

Keselowski had already won three races to that point in the season and added two more, the five-win campaign propelling him to the championship. It’s still his only title, but since 2013 Keselowski has added 26 more victories to his resume; the 2012 effort followed a breakout 2011 season in which the No. 2 visited victory lane three times.

Busch, meanwhile, had a down year that season, winning just once (2012 was bookended by four wins in both 2011 and 2013) and finishing a distant 13th in points. He did tie a second-best career mark to that point of top-10 finishes (20), rebounding in 2013 for a fourth-place points effort.

2012 was a different time in NASCAR entirely, too, when it came to road racing. While ringers populate entry lists for just about every race with right turns, 10 years ago the lineup featured everyone from Chris Cook to Patrick Long to Stephen Leicht, plus the obligatory Boris Said cameo.

Since 2012, three races at the Glen have beaten that classic’s margin of victory, but not by much. Compounded with the fact that none have featured a scrappy, all-out, no-holds-barred fight for the win quite like 2012 (outside of 2014, but even AJ Allmendinger pulled away from Ambrose at the end that year), that August afternoon set an incredibly high bar.