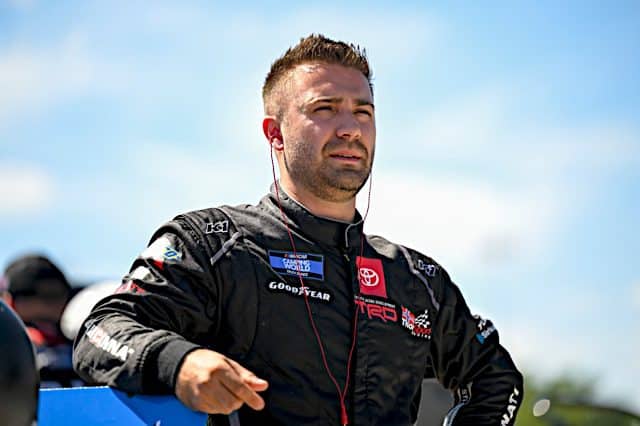 2021 was a crossroads for Ty Majeski. After stints with Roush Fenway Racing in the NASCAR Xfinity Series and Niece Motorsports in the NASCAR Camping World Truck Series ended abruptly, Majeski looked like an odd man out of NASCAR. That’s when ThorSport Racing came into the picture.

Majeski joined ThorSport in 2021 with the intention of being a full-time driver. However, the team was unsure of the timing of that and Majeski became an engineer with the team. Eventually, he ran a fifth part-time truck in four races for ThorSport. That led to a full-time opportunity in 2022, and Majeski has been making the most of it.

Majeski has had near misses at his first win at places like Daytona International Speedway, Kansas Speedway, Lucas Oil Indianapolis Raceway Park and Richmond Raceway. He qualified for the playoffs in his first full-time season, racking up eight top fives and 12 top 10s in the process.

Frontstretch caught up with Majeski to discuss the playoffs, his career trajectory, the Richmond conditions and potentially finding a home at ThorSport ahead of the Richmond race, an event where he won stage one and led a career-high 73 laps en route to a third-place result. With one race remaining in the Round of 10 for the NCWTS, Majeski sits in fifth, 36 points above the cut line.

Luken Glover, Frontstretch: You came really close to winning at IRP. What can you take away from that for the rest of the season?

Majeski: Obviously, the playoffs are actually short track loaded. We go from IRP to Richmond, then Bristol is in there with Phoenix to close it out. Over half the races are short tracks so that’s been a strength of mine given my past and a strength of our [No.] 66 bunch. I’m excited for it and feel like if we put a few good races together we’ll have a shot at it.

Glover: Looking at the rest of the season, which tracks do you feel like pop out where ‘This is where we’ve circled and we can go and clinch our spot into the championship round?’

Majeski: Like I said, really all the short tracks. We go back to Kansas in the first round. We ran second there in the spring. We won the pole at Daytona and go to Talladega, right? I don’t really feel like we have a weakness. I think Talladega and Bristol are the biggest wildcards, but hopefully we can go to Bristol and win and then we don’t have to worry about Talladega.

Glover: You’re with ThorSport now and it’s been kind of a breakthrough year in a way. Have you found a home here at ThorSport in a way you feel like, just based on your career and how you’ve bounced back and forth?

Majeski: Yeah, I sure hope so. My career has certainly been up and down, thought a lot of times that it was potentially over. You’ve just got to try and keep winning races and staying in the game. I feel like being so competitive for years in the late model has sort of kept my head above water in some circumstances, and finally settled down with these guys at ThorSport. There’s a lot of great people up there. I love working for Duke and Rhonda [Thorson]. They’ve built such an empire up there and are building their own chassis, hanging their own bodies, it’s just really neat to be part of something like that. Logistically, it makes sense for me. I’m only six hours away from Wisconsin to go race my late model. I sure hope I’ve found a home, I know I’ll certainly be back for as long as they’ll have me.

Glover: You’ve bounced around from different jobs in the garage and things outside of a driver. How has it come full circle for you and what’s it kind of feel like?

Majeski: Just to know you’ve put that hard work in and see it pay off and a potential longer term opportunity, it feels good. I always hated this time of year because I’d be in a deal, but you’d always have to worry about next year at this time of year. I kind of feel like I’m not so much in that position, it kind of is what it is at this point. I feel really happy about where I’m at and how I’ve gotten here. I’ve learned so much working in the shop, being an engineer, getting the opportunity to drive; it’s not how you draw it up but going back and looking at it, I wouldn’t want to do it any other way.

Glover: Are there talks going on about the long-term future or are you just focused on right now?

Majeski: We’re just kind of focused on right now. We’ve really never had any of those conversations. I just know I’d love to be back as long as they’ll have me at ThorSport. I feel like I’ve found a home, feel like it makes sense for me and my lifestyle. Hopefully, it will be a longer term deal.

Glover: How do you feel like you’ve improved as a team this year from week one to where you are now?

Majeski: First of all, Joe and I, my crew chief Joe Shear Jr., really hit it off even before we started together just because we’re both Midwest late model guys. We came from the Rockford area and me in northern Wisconsin, so we had that in common to hit everything off. It’s been a good season so far. Every time you work together, your communication gets better, you’re learning whatever each other likes and doesn’t like. Over time you’ll just continue to improve.

Glover: You’ve obviously got some veteran teammates. You have Matt Crafton and Ben Rhodes, who won a title last year. What’s it been like working with those guys this year?

Majeski: Just to have that type of seniority in the shop, right? Guys who have gotten it done and won championships. Johnny Sauter is running part-time for us. He’s been a big help of mine in my career. He’s a good guy to have around as we race late models against each other and stuff. Just good to have those guys to bounce things off. There is so much experience there on these racetracks, some of these tracks that I’ve never been to. There always available for me to ask them for advice.

Glover: You mentioned going to different racetracks. How important is that knowledge that they are able to give you? What’s it been like as far as a communications standpoint?

Majeski: Yeah, it’s been good. With all the tools that we have now, we have simulators and iRacing, you have all these different tools that you never really had even five to 10 years ago. As long as you put in the effort, study, and talk with those guys. Sort of take every tool you have and try it, do everything you can to shorten your learning curve when you show up to a new racetrack. I feel like that’s honestly been a strength of ours this year. The dirt races and some of the new road course races have been some of our strengths this year looking back at it. Looking forward to finishing off the rest of the year, these have all pretty much been tracks I’ve been to.

Glover: As you get into practice and qualifying, what are you looking to get out of your truck?

Majeski: Obviously, the track conditions are going to change a lot going from the heat of the day to tonight. I’m going to lean on Joe for his experience. He’s got some experience at [Richmond]. This is one of our longer races from a lap number standpoint, so we’re going to see longer runs and this is probably one of the highest fall-off racetracks that we go to. We’ll definitely have to manage runs and probably try to do a little bit of a longer run in practice to see where the truck is gonna go for tonight.

The race would indeed feature long runs, with only three cautions being displayed and only one for cause. Majeski would rack up his eighth top five of the season with the third-place result.

Nice to see a feel good story, that doesn’t include nepotism.