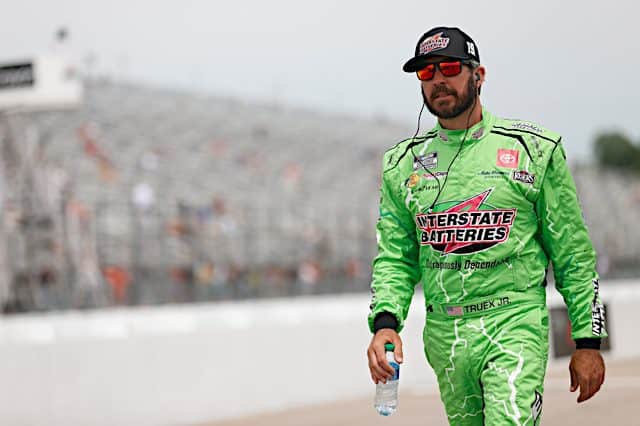 Last weekend’s race at Richmond Raceway is one that Martin Truex Jr., James Small and the No. 19 team will wish they could take back.

But Truex ended up being a complete nonfactor on Sunday, as he had an average running position of 10th and led zero laps en route to a seventh-place finish.

He entered the day 19 points behind Ryan Blaney for the final playoff spot and is now 26 behind heading into this weekend’s race at Watkins Glen.

Richmond wasn’t Truex’s only chance at punching his ticket to the postseason, but it was certainly a missed opportunity. A 26-point deficit is nearly half a race, so Truex will have to outrun Blaney at Watkins Glen and Daytona International Speedway by a wide margin to make it in the playoffs on points. And with Blaney’s success at Daytona and the lottery of superspeedway racing, Truex pointing his way in will be a tall order.

And Truex pointing his way in would be all for naught if Watkins Glen or Daytona produces a 16th winner. Truex would then have to win the other race to make it in, no questions asked.

Therefore, Truex’s best chance at the postseason may rest on winning this weekend at the Glen. On paper, it certainly sounds doable. Truex picked up his lone win at Watkins Glen in 2017, and he led the most laps at Watkins Glen last year. In his last four starts at the track, Truex has finished in the top three in all of them.

However, Joe Gibbs Racing has struggled at road courses with the Next Gen car. Truex has recorded just one top 10 in four road courses races this season, a seventh at Circuit of the Americas in March. In 16 road courses starts this season, JGR drivers have combined for two top-10 finishes. And that’s not even accounting for the competition that Truex will have to face.

Remember that Chase Elliott guy? Sure, he hasn’t won a road race this season. But he is on his way to winning the regular season championship, and Watkins Glen is his wheelhouse. He dominated back-to-back races at Watkins Glen in 2018 and 2019, with Truex finishing right behind him each time. And in 2021, it took everything going wrong in the first half of the race for Elliott to be denied a threepeat at the track.

Elliott is also joined by Tyler Reddick, the winner of the last two road course races in the Cup Series, and Trackhouse Racing Team duo Ross Chastain and Daniel Suarez, who combined to win the first two road races of the season.

Even with his previous success at Watkins Glen, a win for Truex will be a difficult task, but that’s just what it may take to keep his championship hopes alive. And if he is unable to score a win, he has to make up as many points as possible on Blaney this weekend and then hope to make it to the finish at Daytona in one piece.

Will AJ Allmendinger win at Watkins Glen on Saturday to score a win at every road course on the NASCAR Xfinity  Series schedule?

AJ Allmendinger is a fantastic road racer in the Cup Series, so it should be no surprise that he has been tearing up the Xfinity circuit on the left and right turns. And with Austin Cindric graduating to the Cup Series this year, Allmendinger has feasted, with three road course wins in four starts this season.

With nine career road course wins in Xfinity, Allmendinger leads the series by a wide margin; nobody else has more than five. But even more impressive than his win total is the diversity of tracks they have come on. Of the eight road courses that Allmendinger has raced on in the series, he has scored a win at all but two of them: the Daytona road course (which was taken off the schedule this year) and Watkins Glen.

If Allmendinger is able to score the win this Saturday, he will have won every road course on the schedule.

Without question, he will be the favorite on Saturday. His won his first Cup race at the track in 2014, and in three previous Xfinity starts there, he finished runner-up in two of them. With a monopoly on the road courses this season, now would be the perfect time to complete his road course collection in the Xfinity Series.

However, Watkins Glen won’t be without its challenges. He finished second behind a dominant Ty Gibbs at Watkins Glen last year and will have to face him once again. In addition, he will have to defeat not one, not two, but four Cup drivers on Saturday: William Byron, Ross Chastain, Cole Custer and Kyle Larson. Allmendinger will have his work cut out for him.

Nevertheless, Allmendinger mopped the field at the Indianapolis Motor Speedway road course a few weeks ago in a race that featured Cup drivers Alex Bowman, Chase Briscoe and Chastain among others. With how good he has been at the road courses this season, it will be hard to bet against Allmendinger doing it again on Saturday.

With multiple drivers staying inside a burning car in order to continue the race, does NASCAR’s policy of exiting a racecar need to be changed?

Once a driver climbs out of their car in the middle of a race, they are done for the day.

But in the past few weeks, teams and drivers have discovered a dangerous loophole.

At Indianapolis, Chris Buescher suffered damage after contact with Bubba Wallace early in the race. The contact damaged the car, and by the time Buescher reached pit road, the car was on fire and engulfed with smoke.

Had Buescher climbed out, he would have finished dead last. Instead, he toughed it out inside the car as the crew worked to extinguish the flames. And with the help of the free pass and a chaotic finish, Buescher came roaring back to finish 10th.

Last weekend at Richmond, Chase Briscoe found himself in a similar situation. The car caught fire with just under 100 laps to go, and Briscoe went to his pit box for the crew to extinguish the flames. Just like Buescher, he endured the heat of the fire and the fumes from the smoke and the extinguisher just to stay in the race.

After the fire was put out, Briscoe was sent back on his way. But unlike Buescher, there was no caution or late race calamity to save his day. He finished three laps down in 23rd after running in the top 10 when the issue began.

Briscoe and Buescher aren’t even the only drivers to suffer from an unusual fire in recent weeks. Joey Logano finished sixth at Indianapolis and then had to bail out of his car on the cooldown lap after his car lit up. At Michigan International Speedway, Custer had a flat tire that set the left front wheel of the car ablaze. He too had to escape after the flames and smoke became too much to handle. But just like Briscoe and Buescher, he drove to his pit stall instead of stopping for a firetruck.

With this many occurrences in recent weeks, drivers should not be forced to stay in a burning car in order to continue a race. If a car is on fire, the driver should be allowed to exit the car and let the crew extinguish the blaze. If the car is still drivable and able to meet minimum speed on the racetrack afterward, they should be allowed to continue. But if the car catches fire a second time, the team’s day is automatically over.

The second Richmond race with the Next Gen car was an improvement over the first. But is it what everyone wants?

The Next Gen car has done wonders for the racing at intermediate tracks, but it has left a lot to be desired at short tracks, road courses and flat tracks.

Last weekend’s race at Richmond was just the second repeat race of the season with the Next Gen car, with the first being Atlanta Motor Speedway in July. With the Next Gen cars coming back to Virginia, there were several questions about how the car would perform with one race of data and information under its belt.

The result was a remarkable improvement. Unlike the spring and in years past, the cars were able to successfully use the high line. Passing through the field was also easier than the spring, and the long green-flag runs and strategy provided a race that never grew stale in the middle. Finally, the last 70 laps saw an exciting battle between Kevin Harvick and Logano out front before Harvick had to defend challenges from Buescher and Christopher Bell while navigating traffic.

Given the product at Richmond in recent years, it was a fantastic race. A lot of fans said they felt satisfied with the way the race went down.

But there’s also the elephant in the room about the Richmond of old. By definition, Richmond is a short track, but it hasn’t raced like a short track in quite some time. There’s not as much close racing or beating and banging as there is at Bristol Motor Speedway and Martinsville Speedway, for example. And with the Cup Series down to just five short track races on the calendar, it is crucial for the racing product of Richmond to be enjoyable for the majority of viewers.

The Action Track’s best days were seen with the Gen 4 car, and the two races with the Next Gen have shown there is still a long road ahead in getting that style of racing back. But with the struggles that the Next Gen car has faced at Martinsville among other tracks this season, last weekend was absolutely a step in the right direction.