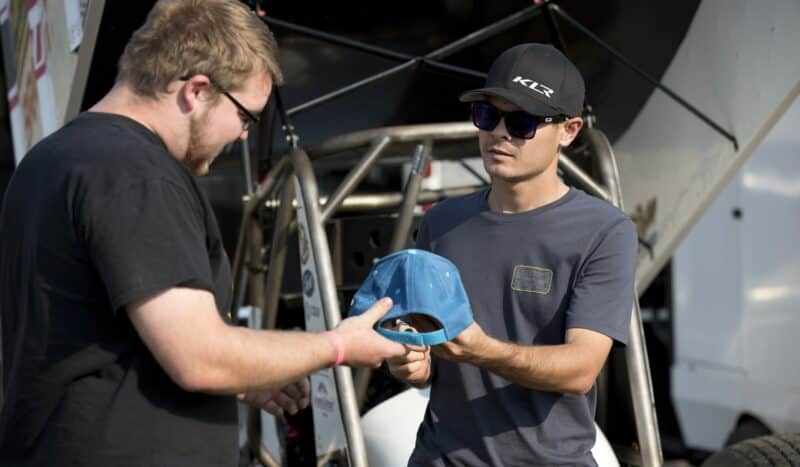 The winged sprint car answer to the Flo Racing Night in America super late model series saw a mix of national ringers and regional Indiana talent contest a $22,022-to-win feature that ranked among the better-paying races across the USAC and World of Outlaws circuit in 2022.

Here are six takeaways from this inaugural event, the High Limit Open.

1. What Works for Late Models Works for Sprint Cars

Every single night that the Flo Racing Night in America series has contested late model races dating back to last year, there’s been no shortage of tweets begging for a sprint-car equivalent to the midweek tour.

Well, it’s here, and if Tuesday at Lincoln Park Speedway was any indication, it can absolutely work.

A full night of racing and done by 10pm. Congrats @BradSweet49 @KyleLarsonRacin and everyone with the @HighLimitRacing tour on an awesome inaugural event. Great to see a full house of fans too!

The car count was healthy (35 sprints were on the property), the talent level was high (NASCAR regulars Larson, Alex Bowman, Chase Briscoe and Ricky Stenhouse Jr. were all present, as was defending All-Star Circuit of Champions titlist Tyler Courtney) and the racing was competitive, with Buddy Kofoid stealing the show in the late going from Justin Sanders and Kevin Swindell’s trademark No. 39 team.

The race format was simple, ignoring inverts and passing points to utilize the straight-up starts, with a dash, format that the WoO uses on its tour. The event was capped at two classes, the sprints and a local class, and as a result the program was over by 10 p.m. ET. Absolutely perfect for a work night, be it for those in the stands or the rest of us watching on Flo Racing.

2. Lack of a Studio Did Broadcast Wonders

One area where this event even topped Flo’s namesake late model tour was in how the entire broadcast stayed at Lincoln Park Speedway rather than utilizing a studio for pre-race and intermission commentary.

Now, I understand that DirtonDirt is pretty much the authority on late model racing and were instrumental in getting the Flo tour up and running. But the DirtonDirt crew has made a habit of cutting into and even ignoring support class features to go over its own interviews and predictions. It makes races feel more like episodes of content, and that’s not a good thing.

Tuesday night’s High Limit broadcast, which blended a nationally recognizable sprint car field with the local bomber class, was a masterclass of streaming commentary. The booth was spot on, stayed on topic and made the support class races feel every much the event the sprint cars were (though embellishing the bombers as the premier class at a track synonymous with sprint car racing felt like a stretch).

Fingers crossed there’s no plan to add a studio component to this series. It doesn’t need it.

3. Here’s Hoping the Event Made Money

And on that same note, not using a studio should reduce the overhead and production costs necessary to put on High Limit Racing events. And that’s a good thing, because for all the good that Flo has done for dirt racing in general, putting races on Flo has not proven a license to print money.

Case in point, the last race Larson promoted, the spring late model challenge race at Volunteer Speedway. While that event was a demonstrated success both in packing the racetrack to the rafters and earning the highest ratings in the history of the Flo service, the reality is track owners failed to turn any sort of profit on the event and actually closed the track within a week of the race going off.

Now, for all I know that was a product of race promoters doing bad math in figuring out what was needed to break even on an event that paid a large purse on a weeknight. But Flo, Larson, everyone hopefully learned a lesson from that event. Namely that the racetracks themselves have to be able to make money on these races.

The story that comes out of Lincoln Park following this inaugural event will be worth following. The crowd at Lincoln Park looked great and was comparable to the crowd that the facility drew for its Indiana Sprint Week USAC race last month.

Hopefully the promoters and the streaming service figured out the margins necessary for this type of race to be sustainable.

4. Outlaws Need to Live Up to Their Name

One surefire way for these races to draw crowds that can sustain such large purses would be for the tour to either convince the World of Outlaws to release its platinum drivers to compete in these races or put enough money up to incentivize some of those same drivers to drop the privileged status on the Outlaw tour and adopt the Brent Marks outlaw schedule.

For those who are not aware, sprint car racing operates differently from super late models in the sense that World of Outlaws regulars receive privileges on that tour (merchandise hauler parking, pay, etc.) in exchange for exclusively competing in World Racing Group events. As a result, no Outlaw regulars contested Tuesday night’s High Limit Open; current WoO points leader Sweet was there, but working as a track official.

Sweet is putting on his promoting hat for tonight's @HighLimitRacing Open presented by @K1RaceGear at Lincoln Park Speedway!

There are reasons for drivers to stick with the platinum rules the World of Outlaws insist on. Unlike in late models, where there are three national tours that all pay big money and have crown jewel races that will incentivize the biggest names in the country to race, in sprint cars the World of Outlaws is a step above all other touring sprint car series, both in terms of pay and stature.

The difference here, though, is that the High Limits Racing Series is offering money that actually outstrips the average Outlaws event, which offers a standard $10,000-to-win purse. And six months into 2022, the Outlaw schedule has only featured midweek races seven times. Translation: that’s a lot of money for sprint car teams to leave on the table untouched, especially when the dates don’t conflict with Outlaw points races.

The advent of the Flo Racing late model tour and XR Super Series had a major impact on super late model racing, with the top three national drivers in 2022 (Jonathan Davenport, Chris Madden and Mike Marlar) all having dropped full-time status on the Lucas Oil and WoO tours to chase big-money races. Come 2023, if the High Limits Racing Series can poach a driver or two of that caliber, the sky’s the limit for sprint car invader series.

5. Regional Schedule Diversity a Must

The field was eclectic and had real flavor to it, completely validating the selection of Lincoln Park as the tour’s inaugural venue.

For 2023, until Outlaw regulars are either freed to compete in tour events or opt to chase big money, it’s imperative that this tour find a way to be as geographically dispersed as possible. Races in Pennsylvania Posse country are an absolute must, with a push into New York also a viable option.

And while I’m sure there are already plans to contest races on the West Coast given that two Californians are behind it, making sure those races offer a means for teams to make the expensive tow financially worth it is imperative.

And please, do NOT race at Bristol Motor Speedway.

The announcement during Tuesday’s preliminary action that a $10,000 bounty had been placed on Larson for the High Limit Open was a welcome spark to an event that already had buzz.

NOTE: A $10,000 bounty has been placed on Kyle Larson by @KyleLarsonRacin himself as well as @BradSweet49.

Anyone who finishes ahead of Larson will split the bounty, if Larson were to finish 2nd, winner gets all 10K. If Larson drops out, each driver in the top 10 gets $1,000.

Problem is, if there was one shortcoming to Tuesday night’s streaming effort, it was seeing that story fall by the wayside. For the bounty to be collected, Larson had to finish in the top 10, and while he was running third mid-race, he suffered a flat tire that dropped him to the back of the field.

That Larson made it back to 10th and ensured that Kofoid and the rest of the top-10 finishers in the field were able to collect didn’t really get mentioned at all by the booth until after Kofoid took the checkered flag.

If there’s one place where I’d welcome increased production costs, it’d be coming up with a graphic to track a bounty on track.

How many of you people own a business? Let me know what you own and where you are located? Since you all think the Outlaws should just hand over part of their established business, I want to come to your town and start a business doing what you do. You would be glad to help me start right? Help me with zoning and all the politics to get going, then we could compete with each other.
Say Mr.Keith I want to start a racing and opinion website. You and the rest at Frontstretch.com would be glad to help me by telling what roadblocks to watch out for right? Maybe I could get a list of the contacts for your advertising, they sponsor one website why not two? C’mon think of the fans having more information it is a win win for all of us.

Duane is dead on correct. The WoO is protecting 44 years of promotion and effort.