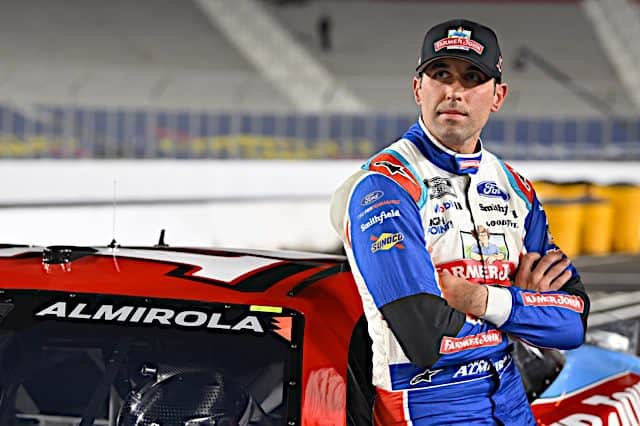 UPDATE: Aric Almirola told reporters Saturday, Aug. 20 that he has not made a final decision about returning in 2023.

“Certainly have prayed a lot about it and continue to think about it and still don’t have a final decision,” Almirola said.

This comes after a report from Motorsport indicated he would return.

Aric Almirola will be back with Stewart-Haas Racing in 2023, as first reported by Motorsport.com on Aug. 19.

At the beginning of the season, it was announced that 2022 would be Almirola’s final year in the NASCAR Cup Series. But in recent months, reports had begun circulating that Almirola was contemplating a return in 2023.

“I haven’t put much thought into (returning) at all just going throughout the course of the year, and then it just keeps getting brought up, and then the chatter turns into real chatter,” Almirola said last month in an interview.

See also
Up to Speed: Richmond NASCAR Speed is a Good Sign for Ford

Now, Almirola will be delaying his retirement for at least one year as he returns to a SHR team in 2023 that is expected to look familiar to this year’s lineup.

“Right now, I believe that’s what our plan is,” Zipadelli said.

Almirola and SHR will release a statement about their plans for next year within the next two weeks, per Motorsport.

Hurray! Another year of mediocrity!

WHY? He is lucky to have a seat at all! For some reason that the ham company who shall remain nameless likes him. Guess that’s what counts. Mediocrity and whining wins again! RETIRE and let a better talent have your job. SHR gotta pay the bills….