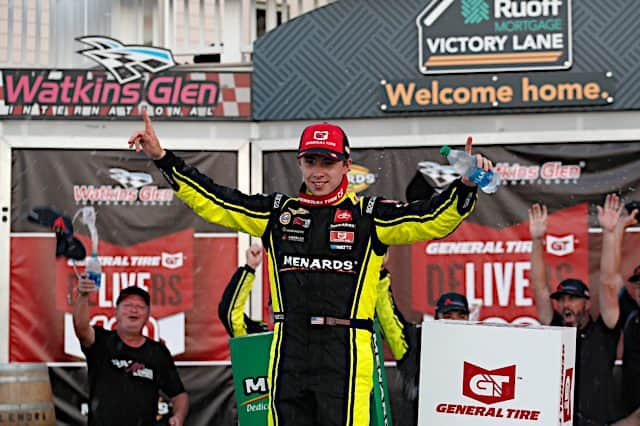 On a day that Sammy Smith dominated in his No. 18 Kyle Busch Motorsports Toyota, it was his teammate and full-time NASCAR Xfinity Series driver Brandon Jones who won the General Tire Delivers 100 at Watkins Glen International on Friday (Aug. 19) evening. It was Jones’ third win of the season in his fourth ARCA Menards Series start.

“First road course win ever — they were tough to beat all day long,” Jones said post-race. “We were all on top of each other and it was about timing that last restart. I was waiting for something to happen. We made adjustments to be more competitive with those guys in the second half of the race.”

ARCA points leader Nick Sanchez battled with Jones on the final lap, briefly holding the lead but finishing second in his No. 2 Rev Racing Chevrolet. Jesse Love finished third and Daniel Dye fourth, the latter moving into second in the points standings. Smith rounded out the top five, rebounding after all the contact on the final lap.

A WILD restart. Retweet to congratulate @BrandonJonesRac on his @ARCA_Racing WIN at Watkins Glen. pic.twitter.com/xcicxOt3Lv

Rajah Caruth, who came in seven points from leading the standings, had issues around lap 15 with a flat tire and eventually finished 11th.

Amber Balcaen and Chris Werth had a hard wreck in the late stages of the race, triggered by Werth snapping loose under Balcaen. The incident sent both cars piling into the wall off the final corner.

Both drivers walked away under their own power after the incident, though it was another instance of Balcaen having a solid run cut short.

Viewers don’t have to wait long to get their ARCA fix, as the next race is on Sunday, Aug. 21. The Atlas 100 is set to go green at the Springfield Mile dirt track at the Illinois State Fairgrounds at 2 p.m. ET, with coverage on MAVTV Motorsports Network and FloRacing.